Partnering with the People of Puerto Rico in Disaster Recovery 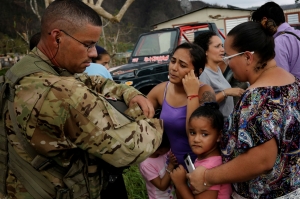 SFC Eladio Tirado, who is from Puerto Rico, speaks with residents as he helps during recovery efforts following Hurricane Maria, in San Lorenzo, Puerto Rico, October 7, 2017

After Hurricanes Irma and Maria struck Puerto Rico in 2017, RAND helped its government develop a comprehensive recovery plan. A key part of that effort included collecting data from individual Puerto Ricans and community-based nongovernmental organizations (NGOs) involved in the recovery effort. Although the RAND team shared its findings with the government of Puerto Rico and the Federal Emergency Management Agency, the project's sponsor, it has not had the opportunity to disseminate critical findings back to the people of Puerto Rico. In the wake of the peaceful protests that led to the resignation of Puerto Rico Governor Ricardo Rosselló Nevares in summer 2019, there is a window of opportunity to empower individual citizens and NGOs to become active participants in Puerto Rico's reconstruction and recovery.

With Alumni Impact funding, Marielena Lara and Vivian Towe propose to develop language- and culturally appropriate outreach opportunities to connect directly with the people of Puerto Rico and share RAND's findings and insights.