RAND Research Briefs help to present the findings of key research in an easy-to-digest format. In August and September, RAND published briefs for eleven studies. The most recent are featured here:

There are so many ways that alumni can find out about what’s going on at RAND.

Policy Currents is our weekly e-newsletter, which delivers experts’ insights on the week’s top news stories. Subscribe for free at www.rand.org/newsletters (where you’ll also find other e-newsletters and periodicals arranged by topic).

The RAND Blog is available at www.rand.org/blog; the most recent entries are at the top, but the search tool can help narrow search results so that you can find posts that most interest you. 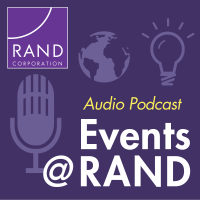 Events and podcasts offer insights and evidence-based perspectives on top policy concerns. For those who can’t attend an event, you can subscribe to the free Events@RAND audio podcast on iTunes or at www.rand.org/multimedia/podcasts/events-at-rand.

A RAND app for smartphones is available; download yours from www.rand.org/site_info/mobile.

Natalie Crawford was recently presented by the Department of the Air Force with the Commander’s Public Service Award. She was recognized for her distinguished performance as a member and senior fellow of the Air Force Scientific Advisory Board.

Between October 2004 and September 2013, Natalie oversaw more than two dozen studies and almost three dozen science and technology reviews of the Air Force Research Laboratory’s 10 technical directorates. She also served as a panelist for the System-of-Systems Engineering and the Space Survivability studies.

According to the citation, “Crawford’s keen insights and leadership were key to the Board’s success in providing senior Air Force leadership sound investment advice to ensure the Air Force’s future dominance.”

Don Stevens passed away on August 19. During his 27-year career as one of RAND's most prominent aeronautical engineers, he led numerous influential studies in the areas of force sizing, force mix, combat aircraft force employment, avionics requirements, electronic warfare, aircraft survivability, and airport security. Although he was most closely associated with RAND Project AIR FORCE (PAF), in which he served for a number of years as director of the Force Modernization and Employment Program, his research interests and leadership spanned multiple research areas and units across RAND.

Don came to RAND from Northrop in 1987. Natalie Crawford shares her memories of his arrival:

Don's boss at Northrop, Paul Marchisotto, called and said, "I have a great young aero engineer working for me and he's getting restless. RAND should hire him!" Don came over for an informal conversation with me about his goals and about RAND. It was clear that he loved engineering and solving problems. I don't remember how long we talked, but I knew we needed to hire him. So I told somebody (don't remember who), "Hire this fellow!" And we did. He was everything Paul said and more. That was a lucky day for RAND, for our research sponsors, for those of us who worked with Don, and for Don, too. Don loved RAND, its people, and its work. He thrived on mentoring new staff. He made a difference.

Although much of Don's research for PAF was classified, he participated in several notable publicly released studies as well. A study of security at Los Angeles International Airport, conducted for RAND Infrastructure, Safety, and Environment (ISE, the predecessor unit to RAND Justice, Infrastructure, and Environment), was one such example. Jack Riley was associate director of ISE at the time:

Don was a legendary PAF analyst and program director. I managed to entice him to help with an LAX security project about a decade ago. I learned more by having Don work for me and the old ISE unit than I probably did through any other project interaction. Not only did he become a mentor to me, but he turned out probably the definitive product on airport security. His insights and humor will be missed, though his influence will long remain.

Michael Rich remembers that same project well, particularly the outrage expressed by local politicians as their plans were subjected to Don's relentless scrutiny, but a central memory revolves around Don's love of books. A true bibliophile, his home and office were filled with almost 10,000 volumes, many lovingly procured in London rare bookshops. He was as willing and able to discuss the finer points of Steinbeck as the finer points of aircraft survivability. A rare combination likely only found at RAND!

Ted Harshberger, director of PAF, shares a few of the highlights from his long career working alongside Stevens:

Don and I were hired at practically the same time back in the "good old days" of the Cold War, and I honestly can't imagine RAND without him. My best memories of Don center around watching him do what he did best—distill the essence of detailed analysis into the critical, central elements of a policy story. He had a gift for making highly technical analysis clear and compelling. Anyone who worked with Don will remember the final briefing outline that appeared on his wall on practically the first day of any project he led. It was remarkable how often that basic framework held up.

Much of my time with Don over the years was spent in windowless rooms filled with computers, and I'd give anything to spend a few more hours in the MOSF with him right now. There was a lot of camaraderie and laughter there, along with the joy of discovery, and I speak for many when I say that. We'll all miss him.

Andy Hoehn recalls the lasting impact Don had on Air Force sponsors and his passion for tackling some of the service's most vexing challenges:

I can still picture Don on the flight line at Langley Air Force Base watching, listening, and observing as the new F-22 fighter was ready to take flight. He loved airplanes and he loved everything about flight. Yet he was always an analyst. He would be the first to surface an aircraft's problems even as he admired all that an aircraft could do. He could be a critic of the Air Force and some of the choices it made, but he did so from the standpoint of making the institution better. Several generations of Air Force leaders admired Donald Stevens for that. So much so that they kept Don's telephone number in their Rolodexes. There are generations to come that will sorely miss having Don at their side.

Donations may be made to StandUpToCancer, an organization whose mission he supported. To read memories shared by others, leave your own message, and donate in Don's memory, visit constellation.standup2cancer.org/49439.

Clyde East, a RAND employee and member of the adjunct staff in the System Sciences and Management Sciences Departments between 1965 and 1996, passed away on June 30.

A decorated veteran, Clyde flew hundreds of combat missions and had 13 aerial victories with the U.S. military, including the one in which he downed the first German plane on D-Day in 1944.

Clyde came to RAND shortly after his retirement from the Air Force. He was a member of the Military Operations group, which consisted of retired officers from the Air Force, Army, and Navy. The group played important parts in many RAND projects, offering inputs based on their military experience, conducting research and analysis, and mentoring staff about military operations.

Watch video of Clyde being honored at the Reagan Library