When it comes to space exploration, what constitutes the “pursuit of the extraordinary?” Is it exploring and colonizing Mars? No, said NASA astronaut Dr. Mae C. Jemison, Mars is not an “audacious” enough goal. We should be pursuing interstellar travel—shooting for another star—said Jemison.

Jemison, who made history in 1992 as the first woman of color to go into space, delivered RAND’s 11th Haskins Lecture on Science Policy in January in RAND’s Santa Monica office. Her talk focused on the vital role science plays in our lives—from the technology that powers our smart phones to the algorithms used for medical imaging—and the importance of continued investment in research and technology. 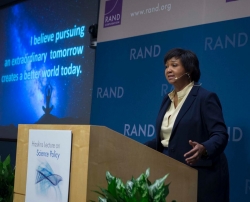 The endowed lecture series supports visits to RAND by prominent scientists and scientific entrepreneurs. As part of her visit, Jemison also met with Michael Rich, attended a researcher roundtable, and participated in a discussion with Pardee RAND Graduate School students.

Read more about her lecture