RAND recently received a generous $3 million gift from trustee Leonard D. Schaeffer to help endow the Medal Awards, RAND’s highest honor that recognizes employees who have made significant and inspiring contributions to RAND’s mission and priorities. The top award, given annually to two individuals or nominated teams, will be renamed the Leonard Schaeffer Medals in recognition of the gift.

“The quality of an organization’s staff is what sets it apart from its peers. At RAND, I’ve seen how skilled and dedicated RAND’s employees are at developing solutions to the most-significant challenges of our time," said Schaeffer. "I’m pleased to help support a high bar of excellence among this high-achieving community.”

Remarking on Schaeffer’s long-standing relationship with RAND and the impact of his gift, Michael Rich said, “Leonard Schaeffer is a valued RAND adviser, and his contributions to society as a public servant, business leader, and philanthropist embody the vision, integrity, and leadership that RAND’s Medal Awards are designed to honor and inspire. We are grateful for his generosity and honored to use this gift to recognize excellence at RAND.” 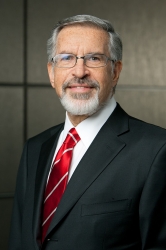 Schaeffer is the founding chairman and CEO of WellPoint (now Anthem) and a long-standing RAND trustee and member of the RAND Health Advisory Board. His previous gifts to RAND have been in support of the Leonard Schaeffer RAND-USC Initiative in Health Policy and Economics and the Comprehensive Assessment of Reform Efforts (COMPARE), a microsimulation model built by RAND researchers that predicts the effects of health policy changes at national and state levels.

In addition to his roles as trustee and board member at RAND, Schaeffer holds the Judge Robert Maclay Widney chair and serves as a professor at the University of Southern California. He is a senior advisor to the private equity firms TPG Capital and Starr Investment Holdings, and is active on the boards of numerous businesses and philanthropic organizations. He established the Leonard D. Schaeffer Center for Health Policy and Economics at USC and serves as the chair of the Center’s advisory board.