On April 2, RAND hosted a memorial for longtime trustee Harold Brown, who passed away in January. The tribute event was held in the Santa Monica office and celebrated Brown’s life and legacy. 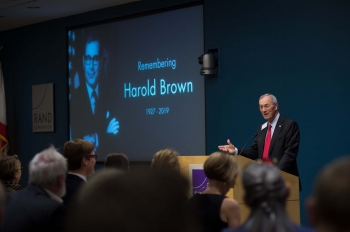 Don Rice, former RAND president and former Secretary of the Air Force, speaking at the memorial.

Brown, who began his career as a nuclear physicist and went on to serve as Secretary of the Air Force and Secretary of Defense at pivotal times during the Cold War, was remembered for his leadership, mentorship, and intellect, as well as his philanthropy. Among his generous contributions to RAND, he and his wife, Colene, endowed a faculty fellowship and chair for the study of public policy at the Pardee RAND Graduate School.