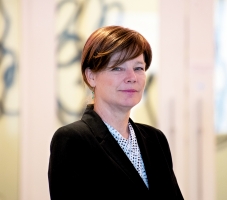 Sally Sleeper was appointed as vice president, RAND Army Research Division, and director, RAND Arroyo Center, effective March 18. She was most recently a senior management scientist and served as director of the Arroyo Center Strategy, Doctrine, and Resources Program. Sleeper has been on staff at RAND for nearly two decades. Her work has focused on organizational effectiveness, innovation and technology development, and program evaluation. In 2008, she was selected as director of programs for the RAND Gulf States Policy Institute. From 2012 to 2016, through an Interagency Personnel Act assignment (IPA), Sleeper supported the Office of the Deputy Assistant Secretary of Defense for Manufacturing and Industrial Base Policy as a senior advisor, a position in which she developed strategy to assess and mitigate the impact of diminishing budgets on industry and their subtier supplier networks. Sleeper returned to RAND in 2016. 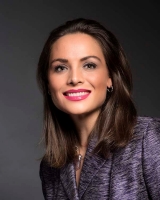 Kathryn (Casey) Bouskill presented “Speed and Security: Promises, Perils, and Paradoxes of Accelerating Everything" at a TEDx event in Manhattan Beach. Her talk was based on a 2018 Security 2040 project authored with Seifu Chonde and Bill Welser. Bouskill explores the question of whether we’re really the masters of the technologies that help us do more, faster—or whether these technologies are mastering us. Is faster is always better? 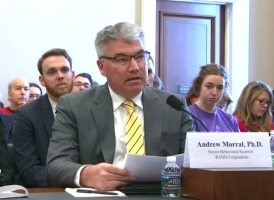 Andrew Morral testifying before the House Appropriations Subcommittee on Labor, Health and Human Services, Education, and Related Agencies on March 7, 2019.

On March 7, Andrew Morral testified before the House Appropriations Subcommittee on Labor, Health and Human Services, Education, and Related Agencies about how disagreements about gun policy can be reduced through scientific research. Morral explained some of the key findings of the Gun Policy in America project and noted that we know little about gun violence and its prevention compared with other safety and health threats. He explained that, because the federal government has not had a comprehensive program of research in these areas for decades, we don’t have answers to very basic questions like “do gun-free zones deter gun violence or invite it?” Morral responded to numerous questions from the subcommittee members about how Congress could improve scientific research and the data infrastructure to support gun violence research.