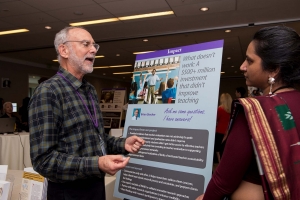 On May 8, the RAND Impact and Innovation Expo was held in the Santa Monica office. The event featured a slate of engaging exhibits and a panel discussion on RAND research that has influenced policymakers, practitioners, and the public, as well as projects that showcase innovative approaches and tools. Attendees visited the exhibits and engaged with their presenters, learned more about research being conducted by staff at RAND, and drew inspiration to take into their own work.

The exhibits demonstrated powerful impact examples. For example, Sarah Hunter offered evidence—from her research on the regional- and state-level problem of homelessness—that cost-effective solutions for Los Angeles County, such as providing supportive housing to sick populations experiencing homelessness, would help save money as it helped those in need. Tina Panis presented research conducted with policy- and decisionmakers in Louisiana to assist in the state's $50 billion plan to reduce risk and sustain its coast in the face of threats from rising waters and other environmental changes. Jennie Wenger discussed a project that provided evidence to the Marine Corps about the impact of women in combat roles.

At a lunchtime panel discussion, Lindsay Daugherty, Susan Sohler Everingham, Sarah Nowak, and Brian Stecher talked about the opportunities and challenges of achieving impact and innovation at RAND and discussed strategies they’ve used in their own work.

The expo was previously held in the Washington, DC, and Pittsburgh offices, and an event in the Boston office is planned for this summer.

Jennifer Bouey has joined RAND as the inaugural recipient of the Tang Chair in China Policy Studies. Based in RAND’s Washington office, she will conduct research on critical issues with implications for China's future, with a particular focus on health care and education.

Bouey has an M.D. from Peking University Health Science Center and a Ph.D. in epidemiology from George Washington University. She is a tenured associate professor and behavioral epidemiologist in the Department of International Health, School of Nursing and Health Studies, at Georgetown University. Her research interests include the behavioral and social determinants of health and health disparities affecting marginalized populations in the United States and China, such as recent immigrants, rural-to-urban migrants, and people at high risk of acquiring HIV.

The Tang Chair in China Policy Studies was established in 2017 with a generous gift from the Cyrus and Michael Tang Foundation. 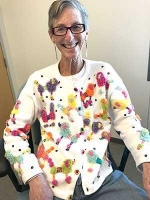 Susan (Suzy) Adler, a librarian in RAND’s Santa Monica office for the past 29 years, passed away on May 28. Adler joined RAND as a reference librarian in 1990 and, eight years later, began managing RAND’s Data Facility, where she was responsible for acquiring, managing, and providing access to data sets to support research. She also worked with staff to preserve important project materials in the RAND Archives.

We recall fondly our colleagues who’ve passed away in 2019. You can read tributes to our alumni in the members-only In Remembrance section of our website.

On May 8, Terri Tanielian testified before the House Oversight and Reform Subcommittee on National Security on veteran and active-duty military suicides. She had the distinction of being the only nongovernment witness on the panel.

Tanielian stressed to the subcommittee that the United States needs to do more than just acknowledge the veteran suicide problem and that policymakers should consider implementing and sustaining meaningful strategies and comprehensive suicide-prevention approaches.

Tanielian provided the subcommittee with several recommendations. First, a zero-tolerance policy against sexual harassment and assault within the military and veteran community must be implemented and enforced, as military sexual trauma is a known risk factor for suicide. Second, given the number of veterans in the workforce, she noted that work-related stress, which can lead to poor sleep and increased use of alcohol and drugs (risk factors for suicide), needs to be addressed through workplace programs to promote self-care and referrals to mental health support. Third, Tanielian highlighted the importance of expanding and improving the U.S. mental health care system to ensure access to high-quality treatment for all veterans. The final recommendation involved restricting access to firearms among veterans who are at highest risk of suicide and promoting firearm safety among all veterans. Firearms are the method used in nearly 70 percent of veteran suicide deaths.

Watch an overview of her testimony