An important piece of RAND history was generously donated to the RAND Archives by a foundational member of the RAND community, Helen Morris (nee Gear). Morris was just 18 years old when she joined Project RAND in 1946, then located in the Drafting Loft at the Douglas Aircraft Company. She worked until the summer of 1948 when she left to study physics at the University of Washington. Morris has contributed a Project RAND staff directory from 1946 to the Archives collection—the earliest definitive list of who worked on Project RAND at its genesis.

“Like Helen, there are a handful of people who did not come to RAND when it incorporated as a nonprofit organization in 1948,” said RAND archivist Cara McCormick. “This list is the only evidence we have of who they were, or that they were ever here. It's a great example of how sometimes a single piece of paper can be just as important from a historical perspective as a whole trove of documents.”

The list is one of the oldest documents in the RAND Archives. It includes the names, addresses, and telephone numbers of Project RAND staff members, including founders and early staff like Frank Collbohm and Merton Davies. At the time, it was referred to as a “Christmas List” because it was used by staff to send holiday cards to each other. 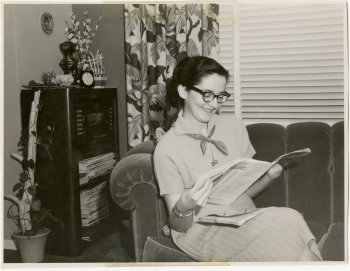 In an interview with McCormick, Morris described what it was like to work on Project RAND in those early years. She talked about her work computing optimum trajectories to go into orbit, calculations for the first RAND report, Preliminary Design of an Experimental World-Circling Spaceship.

“When I was thinking about going to college, everybody was willing to talk to me about it and make suggestions,” Morris said. “I had intended to be an aeronautical engineer, but because of the people I knew at RAND and all of the counseling I got, I decided that physics was a better major.”

Morris, the first woman to receive a physics degree from the University of Washington, said she was pulled out of line at registration and told that girls could not study physics. She begged to differ, saying she had already been working at RAND, but couldn't say what she worked on because it required a Top Secret clearance.

When she graduated, Morris returned to Los Angeles to work for her former RAND supervisor, Dr. Robert Krueger, at his newly founded Planning Research Corporation. After having two children, she joined Lockheed Corporation in 1961, where she worked on the Polaris, Poseidon, and Triton submarine-launched ballistic missiles until the Berlin Wall fell in 1989.

A lifetime member of the Society for Women Engineers, Morris said that working at RAND was the best job she ever had.