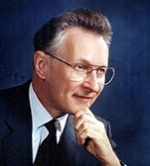 Stephen J. Lukasik, a physicist and former director of the Defense Advanced Research Projects Agency (DARPA), passed away on October 3. From 1977 to 1979, he was the vice president for national security programs at RAND and taught classes at what was then the RAND Graduate Institute.

After completing his Ph.D. at the Massachusetts Institute of Technology, Lukasik worked for Westinghouse Bettis Atomic Laboratory and the Stevens Institute of Technology Davidson Laboratory, where he made several scientific breakthroughs and consulted on nuclear test detection methods. He joined DARPA (then ARPA) as director of nuclear test detection in 1966 and became the agency's director in 1971. Under his leadership, the agency took on numerous cutting-edge studies of smart weapons, artificial intelligence, unmanned aerial vehicles, network-centric warfare, stealth technologies, as well as the expansion of ARPANET and internet protocols, priorities that guided DARPA's work for the next 30 years.

Lukasik was a two-time recipient of the U.S. Department of Defense Distinguished Civilian Service Award. At the time of his passing, he was a distinguished senior research fellow at the Sam Nunn School of International Affairs at Georgia Tech.

We recall fondly our colleagues who've passed away in 2019. You can read tributes to our alumni in the members-only In Remembrance section of our website.

On October 2, Alain Enthoven, a RAND summer associate in 1955 and an economist from 1956 to 1960, visited the Santa Monica office and delivered the lecture “The Origins of Systems Analysis and How It Became Influential in Federal Government Decisionmaking.” His presentation was based on an article he recently published in the Journal of Benefit-Cost Analysis.

Enthoven, whose visit was hosted by the Pardee RAND Graduate School, described RAND's role in helping to establish the fields of systems and policy analysis. He traced the evolution of extended applications of systems analysis in the federal government and compared it with the development in RAND's research portfolio and the eventual formation of Pardee RAND.

Inside Congress: Cohen, Dobbins, and Shatz on Extending Russia

On September 5, Raphael Cohen, Jim Dobbins, and Howard J. Shatz briefed a Capitol Hill audience on nonviolent, cost-imposing options that the United States and its allies could pursue to stress Russia.

Dobbins explained that Russia's leaders have deep-seated anxieties about its domestic stability and its place in the world that could potentially be exploited by U.S. strategies. Shatz discussed economic measures to extend Russia and noted that two of the most promising measures were in the economic domain. Cohen outlined military measures, including air, space and nuclear, maritime, land, and multidomain options, that the United States could take that could impose costs on Russia.

Watch the researchers discuss findings from their recent report

Ji-Young Lee has joined RAND as a senior political scientist and the inaugural recipient of the Korea Policy Chair. As chairholder, she will focus on challenges to East Asian security and prosperity that are of interest to South Korea and the United States.

Lee joined RAND from the School of International Service at American University in Washington, D.C. Her research interests include Asia-Pacific security, South Korean foreign policy, and the impact of China's rise on the U.S. alliance system in East Asia. She is the author of China's Hegemony: Four Hundred Years of East Asian Domination (Columbia University Press, 2016) and The Great Power Next Door (University Press, under contract). Lee has a Ph.D. in government and an M.A. in security studies from Georgetown University and an M.A. in political science from Seoul National University.

The Korea Policy Chair was established in 2018 with a generous gift from the Korea Foundation and is housed in the RAND Center for Asia Pacific Policy.