On September 12, the RAND Alumni Association and Pardee RAND Graduate School hosted an event in Washington, D.C., on the opioid crisis. In a conversation moderated by Pardee RAND dean Susan Marquis, researchers Beau Kilmer, Bryce Pardo, Tisamarie Sherry, and Bradley Stein talked about their work to model the comprehensive opioid ecosystem and help reverse the tide of this critical challenge. 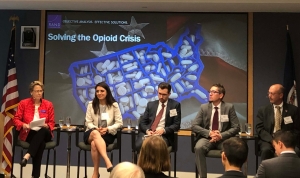 The following day, Kilmer and Pardo briefed a Capitol Hill audience on the possible futures of fentanyl and other synthetic opioids across the United States. They shared findings from a new report—the first major release from a RAND initiative to examine America's opioid crisis—in which they assess the past, present, and future of synthetic opioids.

In the briefing, Pardo discussed factors that have contributed to the rise of fentanyl and other synthetic opioids. He talked about how this current outbreak is different from previous fentanyl outbreaks—it’s largely driven by supplier decisions, rather than user demand. Kilmer discussed steps the federal government could take to address the synthetic opioid crisis.

Kilmer and Pardo said that limiting responses to traditional approaches will likely be insufficient and may condemn many people to early death. Outside-the-box thinking, and new approaches, will be needed to reduce exposure and save lives.

Watch a summary of their Congressional briefing