Thanks to the generosity of almost 200 RAND donors, including a $30,000 matching gift from RAA president Natalie Crawford, the 2019 Alumni Impact Fund (AIF) campaign set a new fundraising record. RAND alumni collectively raised $125,413 during the sixth AIF campaign, which will be used to help RAND researchers extend the impact of their research.

The dollars RAND alumni donate to the AIF are pooled to help boost the visibility, reach, and influence of RAND research. These critical funds help researchers develop new and creative ways to target key stakeholders, raise awareness of timely issues, and make a positive difference in people's lives. 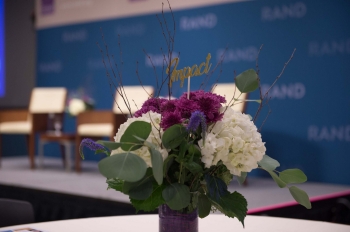 Previous AIF campaigns have supported projects to help understand the consequences of changes to the Affordable Care Act; to better frame the policy debate on the use of armed drones; to match veterans with civilian jobs; to tackle antimicrobial resistance; to help community organizations counter violent extremism; to inform effective solutions to stem the opioid epidemic; to shape the policy narrative on accountability in cyberspace; and to expand education and employment opportunities for inmates and ex-offenders.

Donors to the AIF will have a chance to vote on the new project that will be funded with the money raised during the 2019 campaign, which ended on December 31. A ballot will be sent to AIF supporters, and the winning project will be announced in February.