Lt. Commander Richard (Dick) Best, who worked at RAND for almost three decades, is the main character in the movie “Midway.” The film, which opened in theaters in November 2019, is based on the attack on Pearl Harbor and the subsequent Battle of Midway during World War II.

Best, who was portrayed in the film by actor Ed Skrein, was a dive bomber pilot and squadron commander in the United States Navy. Stationed on the aircraft carrier USS Enterprise, he led his squadron at the 1942 Battle of Midway, sinking one Japanese aircraft carrier and potentially damaging another. 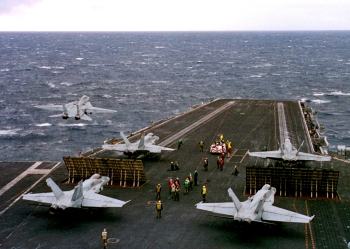 An F-14 Tomcat launches as four F/A-18 Hornets wait to launch from the aircraft carrier USS Enterprise in the Adriatic Sea, February 23, 1999

After medically retiring from the Navy, Best joined RAND and served as the head of security from 1947 to 1975. Upon his retirement from RAND, Best said: “Of the two major retirements of my life, on my back in the hospital from the Navy and on my feet surrounded by friends from RAND, there can obviously be no room for guessing my preference. Having tried both, give me a host of friends any time.”

Best, who died on October 28, 2001, is buried at Arlington National Cemetery.