Researchers Tamara Dubowitz and Wendy Troxel have been selected to receive Zwick Impact Award funding to extend the reach of their research in support of underserved Pittsburgh communities.

They have conducted intensive research in the Hill District and Homewood neighborhoods of Pittsburgh, beginning in 2010 with a focus on whether eliminating “food deserts” could improve residents' diets. Their research later broadened to explore other neighborhood investments and their impact on residents' health outcomes, including physical activity and sleep, cardiovascular disease, and cognitive decline. The primary findings from the completed projects have been published in top-tier academic journals. 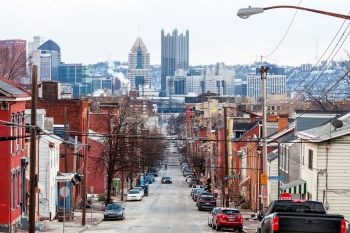 With Zwick Impact Award funding, Dubowitz and Troxel will now work directly with community partners and residents to translate key findings from this collective research effort into accessible communications to inform investment decisions that will affect residents of these neighborhoods.

Funding for the award comes from a generous multiyear gift from late RAND alumnus Charles Zwick—a researcher at RAND from 1956 to 1965 who later served as both a trustee and an advisory trustee. It provides an opportunity to enhance the impact of important research and helps RAND teams reach additional external audiences through outreach and various types of research products, such as publications and multimedia.