On February 4, Brian Michael Jenkins, senior adviser to the president of RAND, testified before the House Homeland Security Committee on new threats from domestic terrorism. In his presentation, The Collapse of Comity: Perilous Times in the Third Turbulent Century of Our Political Experiment, Jenkins discussed the need for a national commission to examine the January 6 riot at the Capitol to conduct impartial inquiries and provide a record for history.

He recommended against a new domestic terrorism statute, saying that, instead, criminals who were present at the Capitol should be prosecuted under the current criminal code to prevent a fraught debate about what groups might be considered terrorists. Jenkins also stressed that elected officials are elected to represent diverse interests through calm discourse, thoughtful deliberation, and creative political compromise, and how they conduct themselves in the public eye matters. 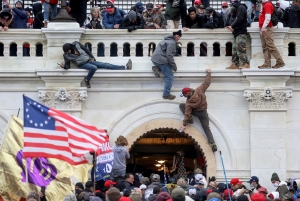 Watch a video overview of his testimony

You can also read the statement by RAND President and CEO Michael Rich on the events of January 6.