In July, Scott N. Pace, director of the Space Policy Institute and professor of the practice of international affairs at the George Washington University's Elliott School of International Affairs, gave a presentation at RAND on the present and future challenges of U.S. national space policy. Pace, who worked for RAND's Science and Technology Policy Institute from 1993 to 2000 and received his doctorate in policy analysis from the Pardee RAND Graduate School, provided an overview of major space policy and program decisions taken by the National Space Council during the Trump administration. He also discussed key space policy challenges for the Biden administration.

Pace has had a long and distinguished career in space policy. He served as deputy assistant to the president and executive secretary of the National Space Council from 2017 to 2020. He previously held positions at NASA and in the White House Office of Science and Technology Policy.

Maritta Tapanainen, a former member of RAND's art and design staff, recently showed her collages at the Jack Fischer Gallery in San Francisco. Tapanainen, who created many covers for RAND publications and oversaw the annual RAND calendar produced by the Office of External Affairs during her tenure at RAND, has shown her works in both solo and group exhibitions since 2000. The collages, which are characterized by a neutral, almost monochromatic palette, feature intricate forms that are created by layering fragments of paper sourced from discarded books and other materials. Tapanainen lifts them from “all kinds of outmoded textbooks, encyclopedias, leather-fillers on the natural sciences, medical instruction, industrial manuals and the like.”

Learn more about the exhibition

Dr. Mark Litwin, an adjunct physician policy researcher at RAND and chair of the department of urology at UCLA, received the 2021 Sherman Mellinkoff Faculty Award from the David Geffen School of Medicine at UCLA. The award is the school's highest honor and pays tribute to the ideal of the finest in doctor-patient relationships and medical education.

Litwin, a practicing urologic oncologist, is a translational population scientist who teaches and conducts research in quality of care, health-related quality of life, medical outcomes, medical decisionmaking, costs and resource utilization, patient preferences, and health care access. He published the first validated quality-of-life instrument to track outcomes in men with prostate cancer and has been an international leader in this area.

The late Dr. Sherman Mellinkoff was the second dean of UCLA's medical school and helped establish and nurture the RAND-UCLA relationship. From 1962 to 1986, he guided the medical school to become an internationally recognized center for medical education and research. 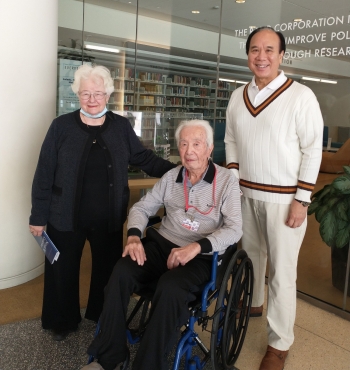 RAA President Natalie Crawford had the pleasure of visiting with RAND alumnus Johan Lau, who worked at RAND from 1964 to 1979. His main area of research was remotely piloted vehicles (now referred to as unmanned aerial vehicles). “Though UAVs or 'drones' are in wide use today, the work Johan and his RAND team did was way ahead of its time,” said Crawford. Johan, now 99 years old, shared fond memories from his years at RAND and of the people with whom he worked.

Crawford also recently connected with alumnus Giles Smith, who spent decades at RAND as a defense analyst. He shared that he's now 93 years old and living in a suburb of Seattle, and he sends his best wishes to fellow RANDites.

All alumni are encouraged to stay connected with RAND. Updates can be shared at alumni@rand.org.