Iao Katagiri, RAND's longtime director of community relations, who played a pivotal role in the development of the institution's Santa Monica headquarters and managed its extensive art collection, died April 28 from cancer. She was 70.

During four decades at RAND, Katagiri morphed from researcher to roles with broad responsibilities, including overseeing legal and regulatory interactions with the city of Santa Monica. She managed the institution's successful campaign to defeat a 1994 ballot initiative aimed at quashing RAND's plans to build a new home in the city's civic center. The new headquarters finally opened a decade later.

Katagiri retired from RAND in 2016 but continued to support its relationships in Santa Monica as an adjunct staff member and member of the Pardee RAND Graduate School faculty—and remained deeply involved in the community.

We recall fondly all of our RAND alumni who have recently passed away. Read tributes to them in the members-only In Remembrance section of our website.

Two former Arroyo Center Army Fellows, LTC (Promotable) Stacy Moore and LTC Octavia Davis, had an unexpected reunion in May at the U.S. Army's National Training Center in Ft. Irwin, California. During a training event for the 3rd Cavalry Regiment from Ft. Hood, Texas, Moore—now the Senior Sustainment Trainer responsible for training all the logisticians, maintainers, transporters, and medical staff during their time at the Army's largest “live” training facility—worked with Davis, the commander of the Regiment's Support Squadron.

Moore and Davis were surprised when they learned they had both been Army Fellows at the Arroyo Center—Moore in 2016–2017 and Davis in 2018–2019—and had actually spoken a number of years ago. 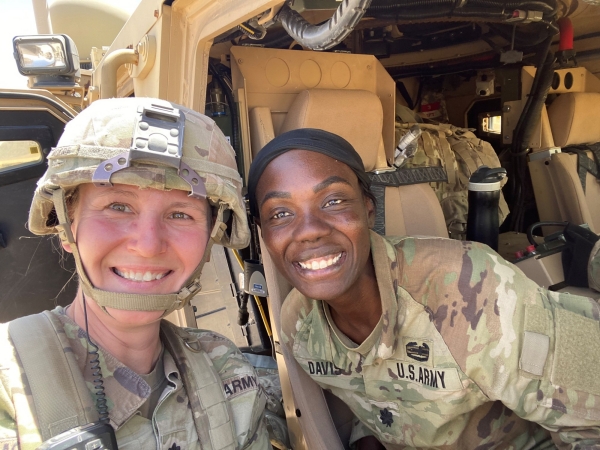 Moore writes: “As we were getting to know one another, we realized that we were both fellows at RAND and that Matt Lewis [senior behavioral scientist at RAND] had email-introduced us years ago. It is such a small world.”

After the training, Davis' team returned to Ft. Hood, ready to provide support to contingency operations worldwide, while Moore will continue as the Senior Sustainment Trainer through the summer of 2023.

RAND supporters have contributed more than $4 million to endow a new chair to advance research aimed at countering Truth Decay, while paying tribute to Michael D. Rich, RAND president emeritus. Rich is coauthor of Truth Decay, a 2018 report that launched an ongoing stream of research into how the phenomenon has adversely affected America's response to everything from climate change to domestic terrorism to the COVID-19 pandemic.

The new chair will help further develop and expand the impact of RAND's research agenda on the problem, including efforts to deepen understanding of it, raise public awareness of Truth Decay's consequences, and design and test solutions to counter the phenomenon. Additional fundraising efforts will continue to augment the work of the chairholder and support related research, events, convenings and outreach opportunities.

Lee Discusses the Internet of Bodies at TEDx Talk

Mary Lee presented at TEDxManhattanBeach about the Internet of Bodies—an ecosystem of internet-connected devices that can alter the capabilities of our bodies or collect personal data. She shared her knowledge about the current and anticipated possibilities of this technology as part of TEDx's “Future Re-imagined” event.

“There are still open questions about how we should handle the security, privacy, ethical, and other concerns associated with these devices,” said Lee, but the technology may also hold a lot of promise, such as revolutionizing medical care through devices.