Vision for a Successful Palestine 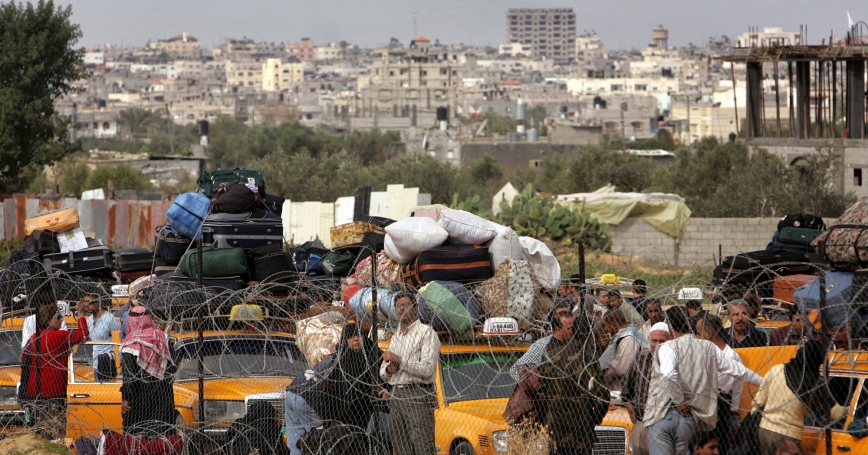 Palestinians wait to cross the Rafah border after it was reopened in the Gaza Strip, November 27, 2005

The path toward creation of a Palestinian state continues its zigzag course, but can still reach its goal. There was progress when a border crossing between the Gaza Strip and Egypt opened under Palestinian control for the first time Nov. 25. But a suicide bombing that killed five Israelis in Netanya Dec. 5 led Israel to suspend talks to allow bus convoys linking Gaza and the West Bank.

To turn the dream of a Palestinian state into a reality, Palestinians need a practical vision of a successful state that is safe, secure, economically viable and at peace with Israel and its other neighbors. Lacking such a vision, there is no chance to lift the Palestinians' aspirations and harness their talents to move in a new direction.

One such vision is embodied in the most comprehensive recommendations ever made for the success of an independent Palestinian state, produced earlier this year after a two-year study by the nonprofit research RAND Corp.

When RAND presented the recommendations to Palestinian President Mahmoud Abbas and Prime Minister Ahmad Qurei in Ramallah, it was favorably received. The Palestinian Authority went on to create a Cabinet-level committee to oversee the integration of the RAND recommendations into the evolving national plans for a Palestinian state.

The RAND proposals — including a landmark rail, highway and infrastructure link between the West Bank and Gaza that would open the door to dramatic new development in Palestine — are designed to give Palestinians new access to jobs, food, water, education, health care, housing and public services, along with improved internal and external security.

Mr. Abbas faces parliamentary elections Jan. 25 and Israeli Prime Minister Ariel Sharon does as well on March 28. By spring, the elections should clarify somewhat the shape and direction of each government and possibly create new opportunities for a settlement. This makes it more important than ever that the U.S. redouble its efforts to elicit the difficult compromises from both parties that can secure the peace.

There has been reticence due partly to questions whether an independent Palestinian state could succeed. The Palestinians have only half the minimum water called for by the World Health Organization; much of its infrastructure dates back to the British Mandate period or earlier. And Palestine faces a doubling of population over the next 15 years.

Nonetheless, the RAND analysis demonstrated a successful state is possible. If seen as achievable, the RAND recommendations might even help the parties reach an agreement. One approach would be for the United States to lead the international community in marshalling the financial and technical resources needed to carry out the RAND recommendations if the Palestinian Authority adopts them.

An initial step would be a U.S.-hosted international conference of the Palestinian leaders committed to the plan and the states and nongovernment organizations essential to its success.

The RAND recommendations have been well-received by senior officials at the World Bank, the European Union and several European nations. But all look for a substantial U.S. role. So do Middle Eastern political and business leaders.

As a result, an American-led international conference could produce serious commitments to help President Abbas and his government develop and carry out a new vision.

The RAND plan's centerpiece, developed with the architectural firm Suisman Urban Design, is a corridor called the Arc. This would support a high-speed 140-mile inter-urban rail line, highways, aqueduct, energy network and fiber-optic cable linking the northern West Bank to Gaza, and connecting the major towns and cities of a new Palestinian state.

The Arc would be a catalyst to generate housing, jobs and business development. Construction of the Arc would employ an estimated 100,000 to 160,000 Palestinians yearly over five years, on top of thousands more jobs in new businesses built along the corridor. It would also help revitalize historic city centers and preserve forests, nature reserves and farm land.

It is a bold vision — requiring about $33 billion in private and public capital investment from the international community in the first 10 years of a new state to carry out all the RAND recommendations, including $6 billion to build the core rail and road infrastructure of the Arc. The total 10-year cost works out to about $760 per Palestinian per year, which is about threefold current levels and roughly the scale of per capita international investment in Bosnia in the first two years after the Dayton Agreement. The G-8 leading industrial countries have pledged $3 billion yearly, but only for three years. A 10-year commitment is needed.

Coordinated international support of the Abbas government's effort to develop a practical independent state would create a historic foreign-policy breakthrough.

The success of an independent Palestine would diminish probably the strongest and most widely held grievance in the Arab world. That is essential to Israel's long-term security.

Palestinian success would help build a new a democratic state in a region with too few of them. And a central U.S. role in developing a successful Palestinian state would help repair America's ties with its international partners that have frayed badly over the last several years.

The road to peace between the Palestinian and Israeli people has been lined with tragedies and disappointments. Israel's withdrawal from Gaza in September accelerated the process of Palestinian autonomy that could lead to the first independent Palestinian state, combining Gaza and the West Bank. By building on the recommendations for a successful Palestinian state proposed by RAND, the United States and other nations can help bring about and maintain a long-sought peace.

Michael Rich is executive vice president of the RAND Corporation.

Copyright © 2005 News World Communications, Inc. Reprinted with permission of The Washington Times. This reprint does not constitute or imply any endorsement or sponsorship of any product, service, company or organization. Visit our web site at http://www.washingtontimes.com/

This commentary originally appeared in Washington Times on December 14, 2005. Commentary gives RAND researchers a platform to convey insights based on their professional expertise and often on their peer-reviewed research and analysis.