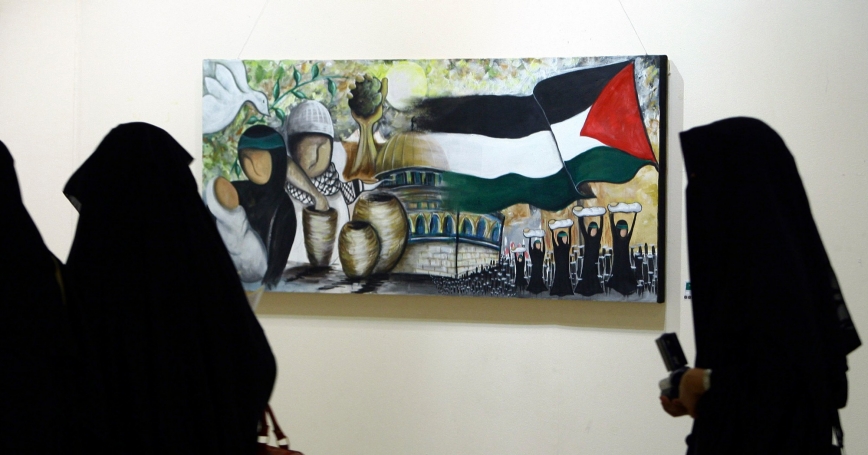 Visitors look at a painting by Saudi artist Hana Hajar in Riyadh, October 5, 2009, as part of celebrations to mark Jerusalem's tenure as the Arab League's "Capital of Arab Culture" for 2009

Books, art, and culture can help win the battle of ideas in the Middle East.

With much talk in the halls of Washington about how to "win hearts and minds" in the Muslim world, it's surprising that few are looking back to a global contest of ideas that the United States and its allies categorically won: the Cold War. In that half-century-long struggle, the U.S. government recognized that arts and culture played a critical role in its ideological struggle against the Soviet Union. Creative works proved time and time again that they could illuminate alternative views and ways of life, eroding support for authoritarian systems in the Soviet orbit. This revelation prompted the United States to invest in cultural programs such as magazine and book exchanges that disseminated banned or hard-to-obtain works into the communist domain. Such exchanges proved crucial to turning the tides of public opinion behind the Iron Curtain.

Today, the battle of ideas is playing out on a different stage: the Middle East, where violent extremism poses a threat to the United States and undermines the freedom and quality of life of people living in this region. Despite the new setting, art can once again have a transformative effect. The popular image of the Middle East is of a cultural backwater, beaten down by decades of authoritarian rulers and rising Islamist extremism. Yet increasingly, burgeoning communities of authors and artists throughout the region are focusing their art on important societal questions, such as religious pluralism, women's rights, corrupt governance, and inadequate education systems. Such art, created by and for those living in the Middle East, can more effectively counter the intellectual and ideological underpinnings of violent extremism than material—some of it propagandist—produced by the United States and the West. Many of today's artistic works are not widely known or disseminated—which is precisely why looking back to Cold War-era U.S. government cultural efforts offers valuable lessons for how to support the current trend-setting work in the Middle East today.

Foreign audiences then and now are notoriously skeptical of government-sponsored media. That's why, during the Cold War, the United States sought to marry its governmental resources with the expertise and innovation of the private sector. Public-private partnerships, such as between U.S. government-affiliated anti-communist committees and private publishing companies, emerged as a result. With U.S. government funding, the publishers sent book catalogues, featuring everything from fashion magazines to George Orwell's 1984, to select recipients in communist-bloc countries. The idea was to expose readers to a way of thinking that was antithetical to the ruling communist regimes. The same could be true today. Agencies such as the U.S. Agency for International Development should look for opportunities to provide funding and expert guidance to regional, private, and nongovernmental organizations to promote the creation and dissemination of otherwise unheralded, socially progressive works of art.

Of course, for such programs to be effective, they need to be targeted. During the Cold War, the United States carefully considered key audiences, pairing them with the media sources most likely to impact them. The book program, for example, focused on the intelligentsia because this was the group most likely to influence broader segments of society in the Eastern bloc. Today, the United States should once again consult regional experts and carefully match audiences with appropriate mediums of counterextremist material. In the Arab world, printed materials are most likely to be read by the elites and intellectuals, as reading levels among the larger publics are relatively low. Movies, television programming, Web sites, cartoons, and music are more likely to shape the opinions of a broader audience. Because many Arab intellectuals today are marginalized and lack strong grass-roots support in their communities, popular media is particularly important. The combination of these groups, elites, and mass audiences will be the key to undermining the attitudes and actions of today's extremists.

The material itself is as important as the audience. Eastern European and Russian readers were eager for more interesting material than the stale Soviet fare. They welcomed dictionaries, technical material, and fiction from the West, as these were either banned or otherwise unavailable. Despite their lack of an explicit message, the books were subtly effective in breaking down misconceptions about the West. In the Middle East, too, improving the distribution of nonpolitical works could help fill the intellectual vacuum created by authoritarian governments and religious extremists.

There is no shortage of relevant works by the region's artists. The book Modern Shaykhs and the Industry of Religious Extremism, for example, criticizes the deepening sectarian divisions in the Middle East and urges religious leaders to promote tolerance and the acceptance of others. Other tomes such as Girls of Riyadh and Queens of the Screen: Pioneers of the Egyptian Cinema address contemporary women's issues. Regional films are also tackling sensitive regional ubjects. Take the Jordanian movie Recycle, which depicts a former extremist who struggles but succeeds at making ends meet while avoiding the temptation to return to violence. A recent Egyptian film, Hassan and Morcos, tells the amusing and uplifting story of a Christian and Muslim family living together in peace. Other works are aimed at offering positive alternatives to jihadist role models, such as the cartoon series and forthcoming miniseries The 99, created by an innovative Kuwaiti entrepreneur and clinical psychologist. The moving Jordanian film Captain Abu Raed takes on family abuse issues while offering an unlikely hero, a well-read airport janitor who inspires destitute neighborhood kids to seek education for a better life. The list goes on.

Unfortunately, government censorship, fragmented distribution systems, and intimidation by extremists keep many works like these from reaching a broad audience. The books mentioned above, for instance, were all banned by government censors, a fact that pushes many authors to publish abroad, where they often publish under pseudonyms. U.S. efforts that help overcome barriers such as these will dramatically increase the free flow of ideas and encourage needed debate in the region.

Certainly, the Middle East is not the Eastern bloc. Although Soviet elites sought out information and ideas from the West, many in the Middle East region are deeply suspicious of Western ideas and intentions. Overt U.S. government assistance to progressive Arab artists could undermine their credibility and in some cases even threaten their safety. So Westerners must think carefully about how to establish public-private partnerships that will be seen as legitimate in this region. The U.S. government will need to be particularly mindful about maintaining its distance.

Still, as in the Cold War era, the power of artistic works to influence thought and action is as relevant and necessary as ever. Now all that's needed is a bit of creativity from the U.S. side.

This commentary originally appeared on ForeignPolicy.com on October 14, 2009. Commentary gives RAND researchers a platform to convey insights based on their professional expertise and often on their peer-reviewed research and analysis.