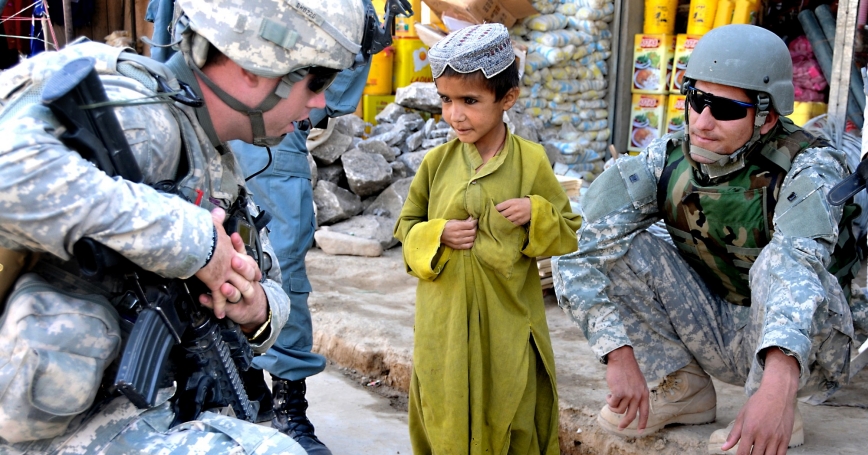 An Afghan National Interpreter and U.S. Army soldier talk with an Afghan boy at a bazaar in the Zabul province of Afghanistan June 29, 2010

With Muammar al-Qaddafi now closing in on a final campaign to defeat the rebels opposing his regime, the world's attention has centered on what the United States and others should do—or even can do—to aid those who are trying to bring down the Qaddafi government. Some observers caution that any sort of intervention would be unwise, if not dangerous. They warn that arming the Libyan rebels today could empower the next Osama bin Laden, who could one day use Western-supplied arms and training against his benefactors. Others cite the disastrous U.S.-led intervention in Somalia in the early 1990s and the ongoing difficulties of fostering civil society in Afghanistan. Even imposing a no-fly zone over Libya could require, as U.S. Secretary of Defense Robert Gates has cautioned, destroying Qaddafi's air defenses, an act of military aggression against a sovereign state that is not at war with the United States. And such actions could call to mind the U.S.-led invasion of Iraq in 2003, an event that still has negative resonance in much of the Arab and Muslim world, to say the least.

But of all the possible historical analogies for the dilemma facing the United States, the most useful one may be the case of Bosnia from 1993 to 1995. At that time, I was U.S. ambassador to NATO. I negotiated eight different decisions to use NATO airpower, but most of these came to naught: only the last time—after the massacre at Srebrenica—did NATO carry out decisive air strikes....

The remainder of this op-ed can be found at foreignaffairs.com.

Robert E. Hunter is a Senior Adviser at the RAND Corporation. He was U.S. Ambassador to NATO and a Director of Middle East and North African Affairs on the National Security Council.

This commentary originally appeared on Foreign Affairs on March 16, 2011. Commentary gives RAND researchers a platform to convey insights based on their professional expertise and often on their peer-reviewed research and analysis.