The Quiet Before the Storm 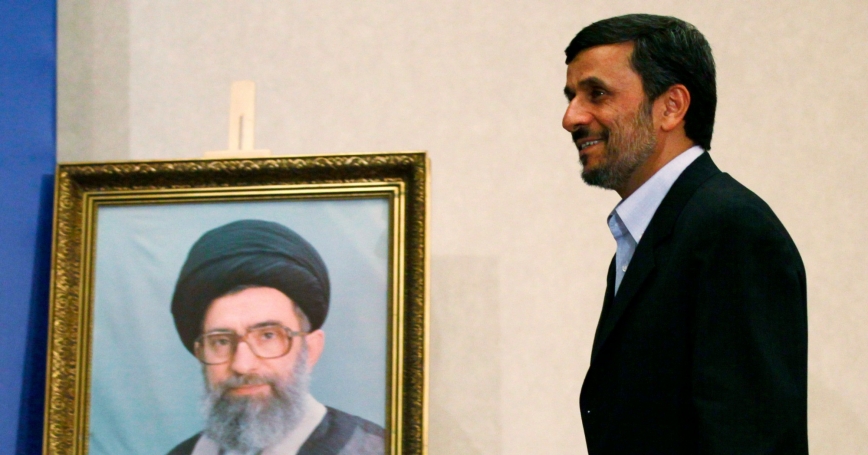 Iran's President Mahmoud Ahmadinejad walks past a portrait of Iran's Supreme Leader Ayatollah Ali Khamenei as he arrives at a news conference in Istanbul, May 9, 2011

The Arab uprisings have dramatically transformed the Middle East. But Iran, a country of pressing concern for the United States, has remained relatively calm. Street protests following the Tunisian and Egyptian uprisings quickly fizzled. And the Iranian government has proclaimed the Arab uprisings to be a sign of U.S. "decline" and a victory of its own revolution across the Middle East.

The reality is quite different. The Iranian regime faces immense internal and external pressures that are coming to the surface in surprising ways. Indeed, the relative calm prevailing now may be a sign of the great storm to come.

Two years ago, the presidential election and ensuing protests shook the foundations of the Iranian regime. Yet Supreme Leader Ayatollah Ali Khamenei and his supporters within the Revolutionary Guards were able to crush the opposition Green Movement and restore nominal calm on the streets.

In the meantime, the regime appeared to consolidate its power. The Green Movement leadership is under house arrest and silent. The pragmatic politician Ayatollah Hashemi Rafsanjani, who initially sided with the opposition, was stripped of his position as chief of the Assembly of Experts, a body responsible for "supervising" the Supreme Leader.

But the fissures within the regime continue to widen. Iran's intelligence minister, Heydar Moslehi, was recently dismissed by President Ahmadinejad — only to be reinstated by Khamenei. Ahmadinejad's in-law and chief policy adviser, Esfandiar Rahim Mashaei, widely believed to be Ahmadinejad's preferred successor as president, has been roundly criticized by conservative figures for independently fashioning new state policies and even his own brand of Islamic ideology.

The disputes over the intelligence minister and Mashaei show that the Islamic Republic is not functioning cohesively. The president and his family are challenging the Supreme Leader. The Revolutionary Guards, once the foundation of Ahmadinejad's power, are displeased with him. Rafsanjani, a "pillar" of the 1979 Revolution, is derided as a head of today's "sedition," his daughter publicly threatened with severe beating by pro-regime thugs.

The turmoil in Iranian politics is certainly due to jockeying for power. Campaigning is effectively under way for Iran's 2012 parliamentary and 2013 presidential elections, which will have a great bearing on the country's direction. Nevertheless, Iran's political infighting is a sign that the system will struggle to hold itself together under tremendous pressure.

There is a lot wrong with Iran today. Much of the population, both rural and urban, is in despair. Unemployment and inflation are sky high. Because of international sanctions over its nuclear program, Iran has a difficult time selling its oil on the international market. The massive subsidy system is being gradually phased out, but the majority of the population will most likely see little benefit. Wages are stagnant or declining. Corruption is rampant.

And despite the regime's claims of regional power — not to mention the fears some neighbors express about the country's purported influence — Iran is surrounded by chaos. Its closest ally, Bashar al-Assad of Syria, is himself on the brink.

The Iranian regime, a house divided against itself, will have difficulty keeping the lid on its troubles for much longer. The storm is coming. What it will look like, and what it will leave in its wake, is uncertain.

Alireza Nader is an international policy analyst at the RAND Corporation, a non-profit institution that helps improve policy and decision-making through research and analysis. He is the lead author of "The Next Supreme Leader: Succession in the Islamic Republic of Iran" (RAND, 2011). This article is presented by Tehran Bureau, the U.S. Institute of Peace, and the Woodrow Wilson International Center for Scholars as part of the Iran project at iranprimer.usip.org.

This commentary originally appeared on PBS FRONTLINE on May 16, 2011. Commentary gives RAND researchers a platform to convey insights based on their professional expertise and often on their peer-reviewed research and analysis.