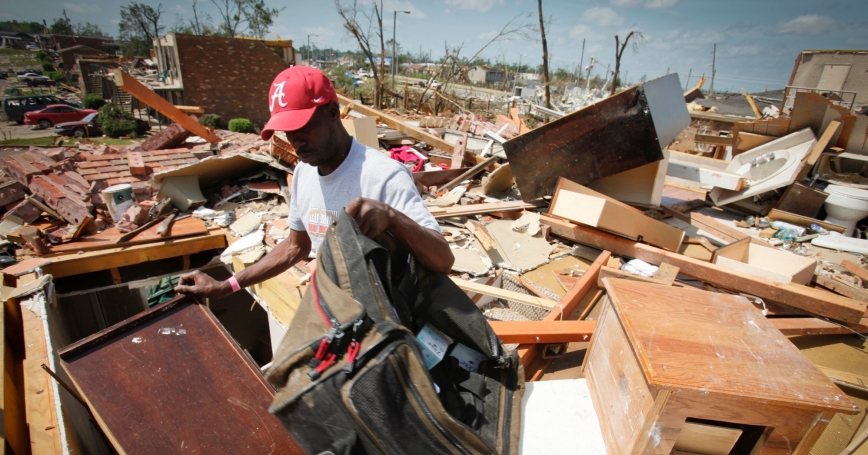 Sydney Maxwell looks for his belongings in his apartment destroyed in April 27's deadly tornados in Tuscaloosa, Alabama, May 2, 2011

Winter storms buried the Midwest and Northeast. In April, the largest outbreak of tornados in U.S. history killed at least 344 people in 21 states, with Alabama among the hardest hit states. Communities along the Mississippi River have experienced historic flooding. An EF5 tornado with wind speeds of over 200 mph devastated Joplin, Mo., killing at least 156 people.

Many of these events have affected the Gulf Coast, already battered from hurricanes Katrina and Rita, as well as the Deepwater Horizon oil spill. In addition to the mounting human tragedy, the costs associated with these disasters continue to climb.

According to insurance estimates, the U.S. has been hit this year with five weather disasters costing more than $1 billion each, setting a record for the most high-cost weather events so early in a year. FEMA recently announced that unless it receives extra money from Congress, it will stop approving reconstruction projects until its disaster fund is replenished.

These concerns are not new, but in the current era of constrained resources it is especially vital for policymakers and the public to be able to track and account for federal disaster funds.

In the wake of Hurricane Katrina, policymakers, as well as those directly impacted by the storm, wanted to know who received the federal money obligated for storm recovery and what the money was obligated for.

Recognizing the importance of this issue, RAND analyzed two databases designed to help account for federal spending—the Federal Award Assistance Data System (FAADS) and the Federal Procurement Data System (FPDS). We examined more than 93,452 grants and 191,536 contracts related to dozens of programs by 65 federal agencies to try to identify where federal grants and contracts were obligated, for what types of recipients, and for what purpose.

In the end, RAND found it difficult to reach firm conclusions because the data were incomplete and in many cases contradictory. We were simply unable to follow the money trail to the final recipients or to determine what the money was actually spent on.

While this law has created more transparency in federal databases, it remains difficult and cumbersome to track the many separate streams of federal funding for disaster assistance. Many of the errors in both data systems continue to arise from confusion over definitions and the types of information collected and reported.

FPDS and FAADS are just two databases among many tools developed over the years to help account for federal spending. Many of these systems and databases overlap. They are complex, and the data remain incomplete or at times inaccurate.

If Congress wants to improve its ability to track federal spending, the systems in place for tracking it should be brought up to 21st century technological standards.

At the same time, the tools for data analysis and reporting should be improved to make things easier both for the people collecting and recording data and those who wish to analyze it. These improvements would not only increase accountability, but give Congress and the administration the information they need to better target increasingly limited funds.

Measures of effectiveness would help policymakers determine whether disaster funds are actually reaching and helping those who need them most. These measures would take into account all three phases of the disaster process: response, short-term recovery, and long-term recovery. This last phase—most often neglected—is the key to rebuilding a community and making it more resilient.

If the U.S. does not improve its ability to track federal spending and develop reliable measures of effectiveness, precious federal disaster aid will continue to be at risk of being squandered.

Agnes Gereben Schaefer is a political scientist at RAND Corp., a nonprofit institution that provides research and analysis for decision makers.

This commentary originally appeared in The Montgomery Advertiser on July 14, 2011. Commentary gives RAND researchers a platform to convey insights based on their professional expertise and often on their peer-reviewed research and analysis.