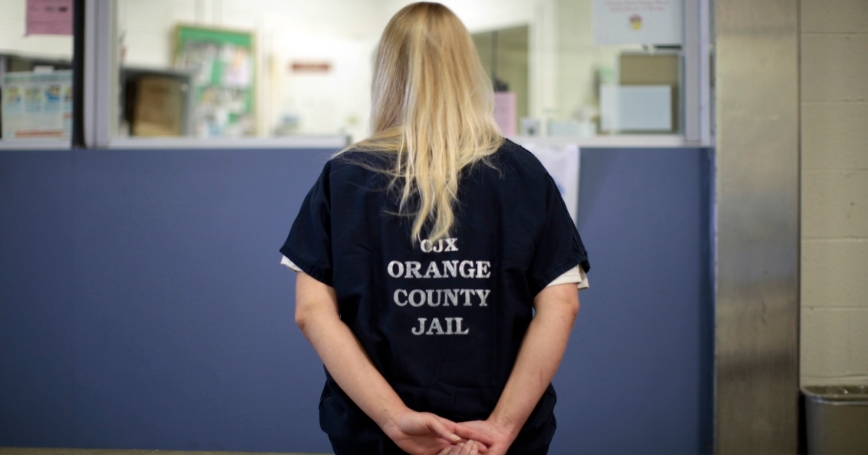 A woman is checked into the Orange County jail in Santa Ana, California, May 24, 2011

The reality that tens of thousands of California state prisoners may soon be sent to local lockups is beginning to hit home. Los Angeles County Supervisor Michael D. Antonovich likens the impending prisoner influx to a "bar scene — a violent bar scene that you saw in 'Star Wars.'"

That may be overstating the case. But the fact is that the U.S. Supreme Court decision ordering California to reduce its prison population by 30,000 — to be achieved in part by having more low-level offenders serve their time in county jails — is going to have serious repercussions.

The most obvious may be, as Antonovich alluded to, public safety. Jails, many of which are already overcrowded, are likely to become more crowded, and they often lack the capacity to provide the rehabilitative services needed by this population. Local criminal justice systems are also likely to come under additional strain.

And there's another consequence that hasn't been talked about as much: The strain on local budgets of trying to meet the healthcare needs of this population. The chief reason the court ordered a reduction in the prison population was the failure of the state to meet the basic medical needs of prisoners. Can strapped local governments really do any better?

Many of those incarcerated, whether in state prisons or county jails, have significant medical, mental health and drug treatment needs that counties are ill-equipped to handle. Many also have chronic conditions or infectious diseases that need to be treated and managed. And of course these prisoners ultimately return to our communities, bringing their medical needs to places where the healthcare safety net is fraying at best.

The problems the prisoners contend with are serious. It is well known that California prisoners tend to be disproportionately sicker on average than the California population. The Rand Corp.'s ongoing study on the public health implications of prisoner reentry has found that 18% of California inmates report having been diagnosed with hypertension, 8% with cardiac problems and 5% with diabetes — all chronic conditions that require medical management.

Moreover, 13% reported having been diagnosed with tuberculosis, 13% with hepatitis and 9% with sexually transmitted diseases. If left untreated, such infectious diseases have implications for the public health of the communities to which ex-offenders will return.

Although these percentages are high, because they are self-reported data these findings are not directly comparable to estimates of prevalence. However, we know from national studies that the prevalence of schizophrenia or other psychotic disorder is three to five times higher in the inmate population than it is in the total U.S. population. The prevalence of bipolar disorder among the U.S. state prison population is nearly three times greater than it is in the U.S. population as a whole. Based on data from the National Survey on Drug Use and Health, an estimated 9.7% of Californians age 18 years or older in 2007 met the diagnostic criteria for alcohol or illicit drug dependence or abuse, a far lower percentage than that reported by California inmates.

We have studied where prisoners go when they are released, using state parolee data to track their return to California's 58 counties and to specific communities within those counties. And we have looked at the healthcare, mental health and substance abuse facilities in those communities: the safety nets. What we found is that ex-offenders tend to return to California communities with the least amount of healthcare, mental health and substance abuse resources.

So where does that leave us? The state has been unable to meet the medical needs of prisoners, a disproportionate number of whom are afflicted by chronic ailments, so we are going to transfer them to county jails, from which they will eventually be released into the communities that are least able to help them. This does not sound like a solution.

The nub of the issue is the increased demand for healthcare services that prisoners and ex-prisoners pose for communities, an issue that tends to get lost in discussions about the potential impact of the Supreme Court's decision on counties.

The state needs to deal with prison overcrowding and inadequate medical care for prisoners in ways that don't simply transfer the burden to county criminal justice systems and the healthcare safety nets of local communities. If the state shifts responsibility to counties, it will also need to shift enough money to fund the treatment needs of this population.

Lois Davis is a senior policy researcher at the Rand Corp. and the author of "Understanding the Public Health Implications of Prisoner Reentry in California: Phase I Report."

This commentary originally appeared in Los Angeles Times on August 19, 2011. Commentary gives RAND researchers a platform to convey insights based on their professional expertise and often on their peer-reviewed research and analysis.