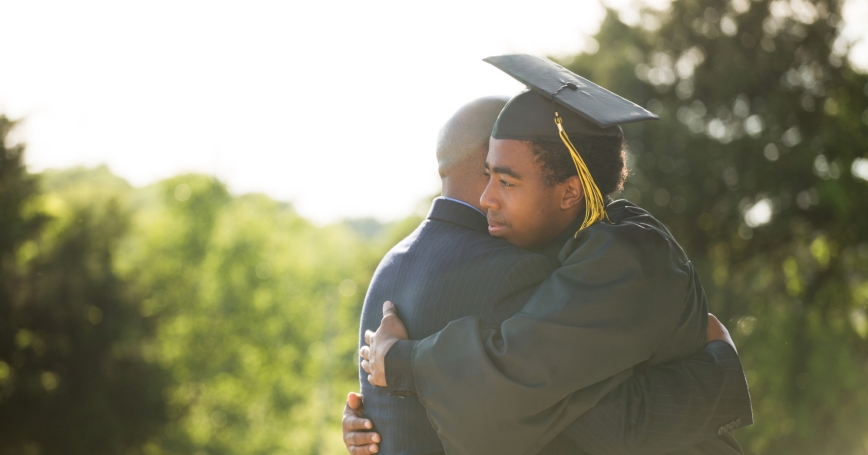 Boys and men of color—in particular, young African American men—are particularly vulnerable to such disparities. For example, they tend to have lower high school graduation rates, a greater likelihood of going to prison and higher mortality rates from homicide.

What often gets lost in the numbers—but what the numbers clearly show—is that there is an interconnection between disparities across domains. For example, research has shown positive associations between maternal education and a range of child outcomes. So improving outcomes in one area may also have spillover benefits in other outcome areas. Ultimately, a variety of strategies at the macro or policy level, at the community level and at the individual level will be needed to improve the chances of young African American men.

Poverty is associated with such factors as the number of parents in the household, their level of education, and whether they work. African American children are about 2½ times more likely than white children to be living in single-parent households and to be living with unemployed parents. Families with a single mother have the highest poverty rates—42 percent. And about half the poor children in California live in families where neither parent finished high school, with the poverty rate in these families at 44 percent.

From a health standpoint, the data tell a similar story. For example, nationally, African American male adults and adolescents have a nearly seven times higher risk of contracting HIV or AIDS than their white peers do. In California, HIV-related mortality is the eighth-leading cause of death for African American men, and they have a mortality rate from HIV infection nearly four times higher than that of white men.

Post-traumatic stress disorder (PTSD) disproportionately affects boys and young men of color. Nationally, African American adolescents are 2½ times more likely than white adolescents to develop PTSD. When we look at data from the Developmental Victimization Survey on children's exposure to violence, African American youth are more likely to witness different forms of violence than white children. Children who witness violence are at increased risk for becoming victims themselves, for PTSD and for other negative consequences.

And, African American infants also begin their development at a disadvantage relative to white infants. In California, over 12 percent of African American infants are born with low birth weights compared to 6.5 percent of white infants. When a child is born with low birth weight, he is at greater risk for neurological, cognitive, behavioral and academic problems and, ultimately, for poorer health and increased risk of mortality than infants born at a normal birth weight.

The numbers for educational and public safety disparities are also well known. Nationally, African American male students in grades K-12 were nearly 2½ times as likely to be suspended from school in 2000 as white students. School suspension has been shown to be predictive of dropping out of school. African American Californians over age 25 are nearly twice as likely to be without a high school diploma as whites. High school graduation rates lead to earnings differences by race/ethnicity; high school graduation status is also associated with other outcomes, such as health and the welfare of one's children.

Such large disparities are, unfortunately, only amplified by the intersection between the domains. Research has identified school failure and low levels of education as heightening the risk of involvement with the criminal justice system. And those caught up in that system are twice as likely as the general population to become high school dropouts.

Helping young men who are in the juvenile justice system or in prison to earn their high school or GED degree may be one way to begin to address some of these problems. Vocational education and training may also potentially help young men find employment when they return to the community.

Such answers are even more crucial given recent changes in both the criminal justice system and the broader economy. Less than one-third of inmates reported receiving correctional education before the recent economic downturn. But, given budget cuts and crowding, many correctional education and reentry/life skills programs are being cut at the state level, with even fewer inmates receiving these services.

Lois M. Davis is a senior health policy researcher at the RAND Corporation. She is leading a national study examining educational methods for incarcerated adults and juveniles and completing a study on the public health implications of prisoner reentry in California.

This commentary originally appeared on Tavis Smiley on PBS on August 26, 2011. Commentary gives RAND researchers a platform to convey insights based on their professional expertise and often on their peer-reviewed research and analysis.