Is it Time to Consider a New Approach to Airline Security? 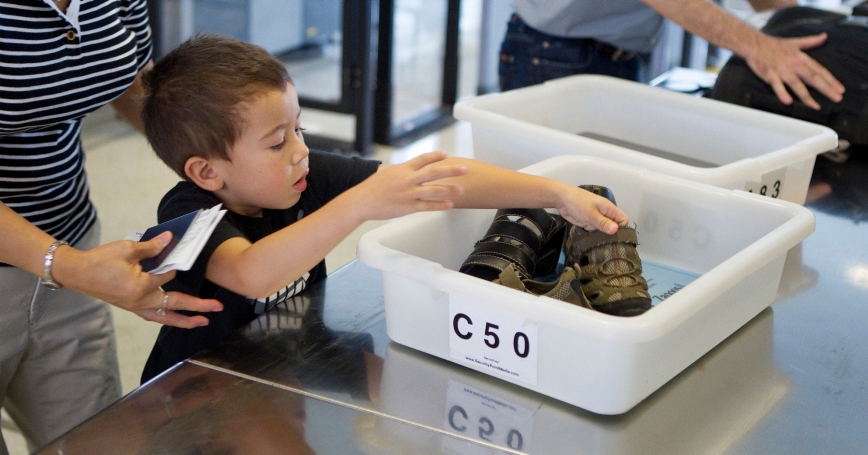 A child puts his shoes in a bin while going through a TSA security checkpoint in the Newark Liberty International Airport in Newark, New Jersey, July 28, 2011

From the failed attempt to blow up a passenger plane flying from Amsterdam to Detroit in 2009 to the unsuccessful attempt to bring down two cargo airliners flying to the United States in 2010, Americans need no reminder that — 10 years after 9/11 — terrorists remain obsessed with attacking airlines and airports.

To meet this threat, the United States is spending billions of dollars each year on airline security. In light of these dollars and in light of this continuing threat, it is fair to ask what the American people are getting for their money besides a pat down at the airport and a body scan before they board their flights. Has the U.S. investment in airline security worked? And are the benefits worth the costs? The answers depend on how one calculates the costs and benefits of airline security. Generally speaking, cost-benefit analysis of security measures works best in situations where there is a high volume of continuing crime, allowing analysts to implement new security measures and quickly discern their results. Cost-benefit analysis does not so easily apply to terrorist attacks, which are fortunately rare, but which also have potentially significant consequences that go beyond casualty and property loss.

While all deaths are tragic, a cold quantitative analysis would tell us that terrorist attacks make a minuscule contribution to violent deaths in America. Between 2000 and 2009, nearly 200,000 Americans were the victims of homicides, while 360,000 more committed suicide. An additional 440,000 were killed in traffic accidents, bringing the decade body count to a million. In fact, the average American has a roughly one in 7,000 chance of dying in an automobile accident, a one in 16,000 chance of being murdered, but less than a one in a million chance of being killed by terrorists. The 9/11 victims account for less than one-third of a percent of America's total carnage for the decade.

But 9/11 also represented the largest loss of life on American soil since the Civil War. The direct costs of the attack were estimated to have run between $50 and $80 billion, with business losses putting the total into the hundreds of billions of dollars. The 9/11 attacks also scarred the nation psychologically and created a political crisis that led to a war on terrorism which, according to one estimate, has cost the nation $3.8 trillion, not to mention thousands killed in subsequent wars. What America spends annually on airline security would pay for just three days of the war in Afghanistan, a military mission maintained to prevent al Qaeda from regrouping and launching new terrorist attacks.

Indeed, strict application of cost-benefit analysis would allow the removal of both security and safety measures. In the 1970s, terrorists attempted to hijack or sabotage airliners with an average frequency of one a month. Accidental crashes also occurred more often, but aviation was still statistically very safe, and people still flew.

Critics accuse airline security of being reactive and of responding to the last attack. They are right, but this is true of virtually all security. It is easy to conjure up new terrorist scenarios for which security measures are not currently in place — everyone has a little armchair terrorist inside them — but it is difficult to obtain funding or public acquiescence to security measures to protect against things that have not happened. Without the shoe bomber, can one imagine passengers being required to remove their shoes? Could restricting carry-on liquids have been done before the discovery in 2006 of a terrorist plot involving liquid explosives? Yet once an event occurs, it is difficult to argue against adopting new measures to prevent its repetition.

For many Americans, the Transportation Security Administration is their most regular encounter with the federal government, and for some, it is a hands-on experience. Americans are a cantankerous lot. They unrealistically expect 100 percent security, but sound off when security intrudes on their privacy or person. News media exaggerated the public's reaction to the full body scanners and new pat down procedures, but it may also signal that security may be approaching the edge of public tolerance. There is a point beyond which those being protected become adversaries of the measures employed to detect them — that is fatal to security.

Make no mistake — in the years since the 9/11 attacks, airline security has improved. This is in part because TSA has fielded new technology and screeners are better trained. While significant room for improvement remains, the screening force is more stable in contrast to the 300 and 400 percent turnover rate when screening was carried out by low-paid and poorly trained private screeners. Stability means screeners can gain experience, and best practices can be identified and disseminated.

Even more important to improved airline security are the additional layers of security — from additional air marshals to locked and armored cockpit doors which have made hijacking a less viable terrorist tactic. Passenger attitudes have also changed. Instead of passive compliance, a hijacker today faces the risk of being beaten to death by desperate passengers. Mentally disturbed persons have attempted to hijack U.S. planes (without weapons) since 9/11, but, thus far, terrorists have not.

To the extent that current concerns center on terrorist bombs, improvements have been made in that regard, too. Security has made smuggling bombs on board planes more difficult. In the 1980s, for example, there were 39 attempts to sabotage airliners. This dropped to 15 in the 1990s, and eight in the first decade of this century. Despite this decrease and as evidenced by the attempted attacks over the past few years, terrorists keep trying.

In the face of this threat, aviation security faces a number of challenges. Airline passenger loads — which dropped right after 9/11, but then recovered and dropped again with the recession — are now coming back. At the same time, while the number of security measures and security machines has increased, the number of TSA security officials will not significantly increase. That stresses the system, and can begin to degrade performance.

Moreover, terrorists are determined to build small improvised explosive devices and conceal them in ways that make them undetectable to all but the most intrusive security inspection. The good news is that these small devices with exotic explosives and non-metallic detonators are hard to make, don't work, and probably would not bring down the plane if they did. But ultimately, this could be a losing battle for security.

It may be possible that the development and deployment of improved security technologies and reconfigurations of security checkpoints will keep security one step ahead of terrorist adversaries, but it also may be an appropriate time to explore fundamentally new approaches.

American aviation security is based upon the search for objects. This search should extend well beyond passengers — currently the overwhelming focus of airport security efforts — to the thousands of airline and airport employees who pass into "sterile" areas of airports each day without being screened. But in the remainder of this discussion. I, too, will focus on passengers.

All passengers are treated exactly the same way except for a few selected for secondary searches. An alternative approach would be to look more closely at the individual passengers. This would be closer to the Israeli approach, although the volume and more diverse composition of American passengers rule out outright adoption of the Israeli model. It does not mean racial or ethnic profiling.

Instead, passengers might go through one of three security routines instead of the current two. Registered or secure travelers would volunteer information about themselves, undergo a background check, and be approved for an expedited security check, something like "pre-9/11-light." This category might include the most frequent flyers who account for a disproportionate share of U.S. airline boardings. It could also include those with top-level government security clearances.

A second category would be individuals indicated, as now, by computer-assisted screening programs already in place, perhaps using a more advanced version, and by behavioral detection techniques being developed. In addition, some would be randomly selected. (Maintaining an unpredictable random element is always good security.) These are not suspects and should never be treated as such. They are simply individuals about whom less is known or whose travel patterns raise some questions. All other travelers would comprise the third category.

The objective is not simply that frequent flyers will not have to take off their shoes. By reducing requirements for those in lower risk categories, finite security resources can be shifted to higher risk categories.

This is one place where increasing efficiency can increase effectiveness and make airline travel not only more convenient, but more secure.

Brian Michael Jenkins is Director of the National Transportation Security Center at the Mineta Transportation Institute. He also serves as Senior Advisor to the President of the RAND Corporation, a non-profit, non-partisan research institution.

This commentary originally appeared in The Ripon Forum on September 1, 2011. Commentary gives RAND researchers a platform to convey insights based on their professional expertise and often on their peer-reviewed research and analysis.