The Unmentionable Costs of Airline Security 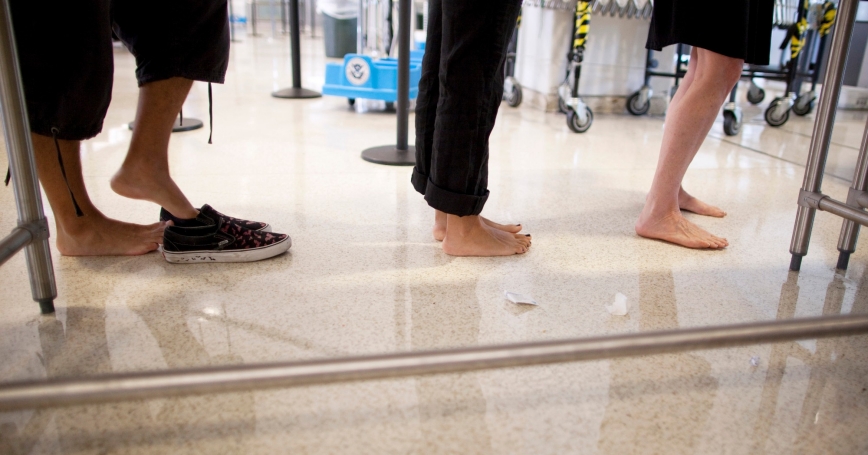 Fliers take off their shoes before going through a TSA security checkpoint in the Newark Liberty International Airport in Newark, New Jersey, July 28, 2011

The phrase "touch my junk" became part of the lexicon of air passenger security in late 2010, thanks to the controversial decision by the U.S. Transportation Security Administration to increase the physical scrutiny of air travelers.

John Tyner uttered the now-famous words in San Diego when he refused to walk through a whole body-image scanner and then refused to submit to a full body frisk. The latter would have involved a TSA agent touching his genitals.

That national attention focused on the anatomy of a private citizen is one indication of how distracted the country has become in its efforts to ensure air passenger security. The focus should be on what works best and at least cost.

The traveling public remains doubtful that the focus has been put in the proper place. TSA has moved toward this kind of screening in reaction to the December 2009 attempted bombing of an airplane over Detroit by Umar Farouk Abdulmutallab, the so- called Christmas bomber, who had concealed explosive material in his underwear.

For most of the past decade, the U.S. has pursued policies with very little regard to the costs they impose on travelers or the net reduction in risk that they generate. It's imperative that we use the next decade to develop smarter, more sustainable and more practical solutions to air passenger security.

We should start by rolling back the procedures that were implemented in late 2010. Further savings could likely be gained by subjecting other security measures—such as shoe removal, the ban on liquids, gate inspections and the use of behavioral-detection officers—to careful scrutiny.

TSA annually spends about $5 billion on a workforce numbering an estimated 60,000. One reason for the workforce and expenses being so large is the fact that the screening functions are imposed virtually uniformly on every traveler entering an airport in the U.S., even while most TSA employees and many airport workers are not screened at all, and while air crews are able to avoid the full-body scanners and pat downs.

Three facts having nothing to do with airport-based security explain why commercial air travel is safer now than it was on Sept. 11. First, cockpit access is limited during flights, greatly reducing the likelihood of a Sept. 11-style attack. Second, passengers and crew members know that they have to intervene in the event of an incident, as they did against Richard Reid in 2001 and Abdulmutallab in 2009. Third, better visa management reduces the ability of terrorists to get permission to travel to the U.S.

These intrinsic security improvements provide a foundation for two additional improvements. The first opportunity is to differentiate between domestic and international enplanements, the latter being where all of the post-Sept. 11 attempted attacks have originated.

One way to do this is to deploy the most advanced screening equipment and the most intrusive methods to screen travelers entering or leaving the U.S., equivalent to the way governments perform Customs and other inspections at international borders. These more intensive security measures could be used for domestic flights only as a secondary mechanism on the small fraction of American travelers that might require additional screening and as a random component to deter attacks.

Such a step would yield big savings in equipment and personnel by reducing the number of machines and agents required at U.S. airports, perhaps as much as $1.2 billion annually, according to a study published this year in the "Journal of Homeland Security and Emergency Management" by Mark Stewart and John Mueller, analysts of homeland security risks.

Additional savings could be achieved by eliminating the supplemental searches of passengers that now occur as they board planes and the use of roving teams to test passengers' beverages for explosive residue in the secure parts of airports.

The second opportunity would be to develop a trusted traveler program, an idea TSA seems prepared to embrace. Though details have not yet been made public, the TSA's plan seems modeled after the border crossing programs Global Entry, NEXUS, and SENTRI. These U.S. programs allow certain travelers who have undergone background checks, submitted fingerprints and paid a modest fee to be preapproved for expedited entry into the U.S. at borders.

These border programs currently provide travelers no benefits with respect to airport security. Extending the privileges of these programs to a trusted traveler program at U.S. airports would be a relatively trivial and easily justified action.

The savings from a trusted traveler program would depend largely on how it was configured, how many travelers would qualify and whether the resources no longer used on trusted travelers were applied to other travelers. The savings would rise with the fraction of travelers who are trusted and could easily approach those associated with relaxing the standards for all U.S. enplanements. Even greater savings could be achieved if trusted traveler status were something for which travelers had to pay.

Had these steps been implemented in the years after Sept. 11, the savings would now likely total in the tens of billions of dollars, with no discernible reduction in security.

K. Jack Riley is vice president and director of the National Security Research Division at the non-profit RAND Corporation in Santa Monica, California.

This commentary originally appeared in Bloomberg Government on September 13, 2011. Commentary gives RAND researchers a platform to convey insights based on their professional expertise and often on their peer-reviewed research and analysis.