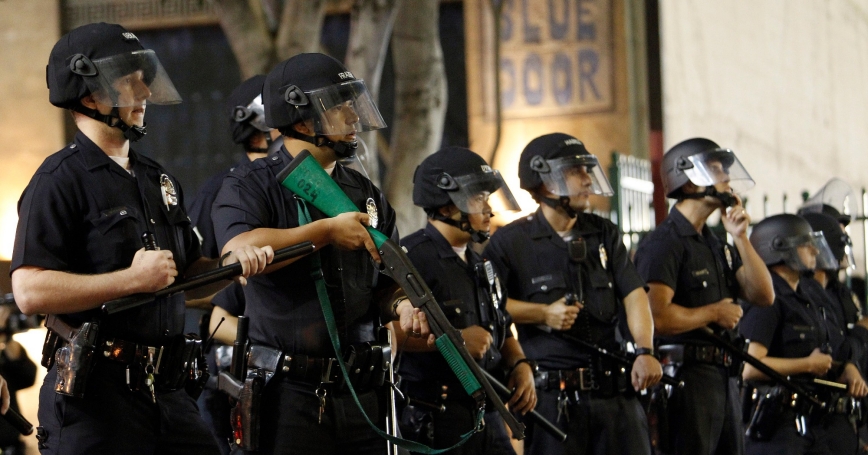 LAPD officers stand guard during celebrations after the Los Angeles Lakers defeated the Boston Celtics in Game 7 of the 2010 NBA Finals, June 17, 2010

by Greg Ridgeway and Paul Heaton

At a recent Capitol Hill rally for the administration's job creation bills, Vice President Joe Biden urged America to hire more police — even in this era of austerity — or accept that crime will increase.

His point is worth considering. Although crime in the United States on average has shown a historic decline since the early 1990s, a recent RAND Corp. report shows that a 10% increase in the size of a police force decreases the rate of homicide by 9%, robbery by 6% and vehicle theft by 4% each year. (The effect on rates of sexual assault is less clear.)

And crime is expensive to communities, businesses and victims.

Each homicide costs a community an average of $8 million, according to reliable cost-of-crime studies. At that rate, Los Angeles' homicides cost it more than $4 billion in 2006, or 2% of the city's total economic output. That bottom line includes obvious costs of crime: adjudication, coroners, medical costs and incarceration. RAND also figured in a factor for the intangible costs of victims' pain and suffering.

The high cost of crime to society suggests that adding police officers may give large cities a sizable return on their investments.

RAND's cost-of-crime calculator can estimate that return for a given community.

For example, in L.A. there were 480 homicides in 2006, when the city started an initiative to expand its force. Since then the force has grown by 8%, or 725 police officers. Homicides dropped to 293 by 2010. With homicide rates already in decline, it would be hard to credit all of the decrease to a bigger police force. But our research suggests that the added police can account for 7% of the 480, or 35 fewer homicides. That's $280 million in crime costs saved.

The 725 extra police cost Los Angeles about $110 million annually. When RAND researchers factored in all serious crimes averted by adding those police officers, savings to citizens in the city came to $415 million a year, a 280% return on investment. The savings don't accrue solely to the city but also to the individuals and businesses that would otherwise bear the costs of crime. Taxpayers indeed appear to be getting their money's worth for investing in an enhanced police force.

Other major U.S. cities could learn from L.A.'s example. Where police departments are small and crime burdens are large, taxpayers could reap a good return on investment by adding police officers. RAND research shows that one additional officer could reduce crime costs by $600,000 a year in Houston, Atlanta, Oklahoma City, Miami, Baltimore and Kansas City.

Similarly, New York City's decision to shrink its police force by about 10% over the last few years makes sense in terms of return on investment. Another police officer there might reduce crime costs by $178,000, which is the cost of an officer's salary (about $50,000 to begin), benefits, equipment and training in the first year.

The time may be right for municipalities to add police officers despite having to cut from other city services.

Greg Ridgeway is director of the Center on Quality Policing and Paul Heaton is director of research at the Institute for Civil Justice at the RAND Corp. The study, "Hidden in Plain Sight, What Cost-of-Crime Research Can Tell Us About Investing in Police," written by Heaton, is available at rand.org.

This commentary originally appeared in Los Angeles Times on November 22, 2011. Commentary gives RAND researchers a platform to convey insights based on their professional expertise and often on their peer-reviewed research and analysis.