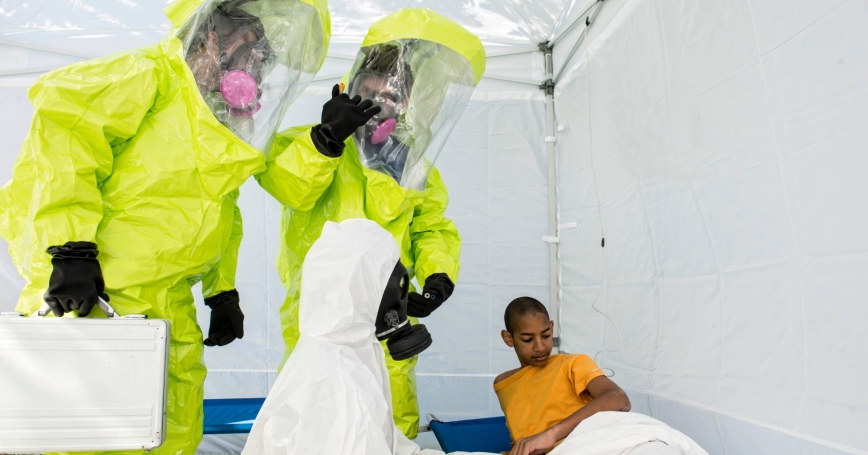 The movie "Contagion," released to coincide with the 10th anniversary of 9/11 and the anthrax attacks, gave moviegoers an opportunity to consider what would happen if a really nasty germ went viral. The movie graphically depicts the rapid spread of illness, death and panic that would ensue. In the film, the pandemic is ultimately brought to heel by the Centers for Disease Control and Prevention and public health science. It is worth considering the lessons the film taught.

Mother Nature can be as dangerous as a bioterrorist. Laurence Fishburne, who plays the CDC director, has one of the most important lines in the movie. When asked if the new virus could be a "weaponized version of bird flu," he snaps: "We don't need to 'weaponize' bird flu. The birds are doing that." At various points in history, Mother Nature cooked up the bubonic plague, smallpox and HIV. The Spanish flu pandemic of 1918-19, caused by an H1N1 influenza virus, killed nearly a million Americans, and some 50 million to 100 million people worldwide. Nobody knows what Mother Nature may throw at us next. That's why it's vital to sustain a strong public health system.

Germs don't care who carries them, or why. Since 9/11, the U.S. has spent more than $50 billion to defend against bioterrorism. But as "Contagion" shows, an unwitting traveler can import a lethal disease as effectively as a bioterrorist. If the first few cases are swiftly isolated and their contacts quarantined, an outbreak can be stopped in its tracks. But if too many people are exposed before the disease is detected, it may spread like wildfire. Once that happens, there is little that public health officials can do besides urging the public practice frequent hand-washing, proper cough etiquette and "social distancing" measures such as school closures and cancellation of large public events.

Panic can be as deadly as disease. The movie's depiction of roadblocks at state lines, and the widespread societal breakdown that follows, could easily happen. This was precisely the scenario public health officials feared during the first days of the 2009 flu pandemic. Luckily, the strain of H1N1 flu that emerged in 2009 turned out to be far less deadly than the one that killed tens of millions in 1918-19. Nevertheless, the 2009 pandemic tested the capabilities of federal, state and local public health agencies. Although they learned valuable lessons that can be applied to future outbreaks, this did not result in stronger congressional support for their mission.

Recent budget cuts have forced local health departments in the U.S. to eliminate an estimated 29,000 jobs (about 19 percent of their workforce). State health departments have cut an additional 16,000 jobs. Some of this is an inevitable byproduct of the painful choices governments must make in hard times. But cuts this deep suggest misplaced priorities. The result is a weakened public health system that will be less capable of stopping the next major disease threat.

Recently, the Bipartisan WMD Terrorism Research Center released a "bioresponse report card." This troubling report underscores the continued threat bioterrorism poses to the U.S. It's important for everyone to understand that effective biodefense rests on a firm foundation of public health. The laboratory techniques, personnel and countermeasures needed to contain a bioterrorist attack aren't much different from those required to contain a natural-disease outbreak. By that metric, the public should be deeply concerned. Over the past few months alone, Listeria-contaminated cantaloupes killed four times as many Americans as the number that died in the anthrax attacks of 2001.

To assure the health security of the United States, we must be capable of stopping anything a terrorist or Mother Nature might throw at us. Wholesale cuts to public health are taking us farther from that goal.

Art Kellermann and Melinda Moore work at the RAND Corporation, a nonprofit policy and decision-making institution.

This commentary originally appeared on Atlanta Journal Constitution on December 29, 2011. Commentary gives RAND researchers a platform to convey insights based on their professional expertise and often on their peer-reviewed research and analysis.