The Year of the Arab Spring 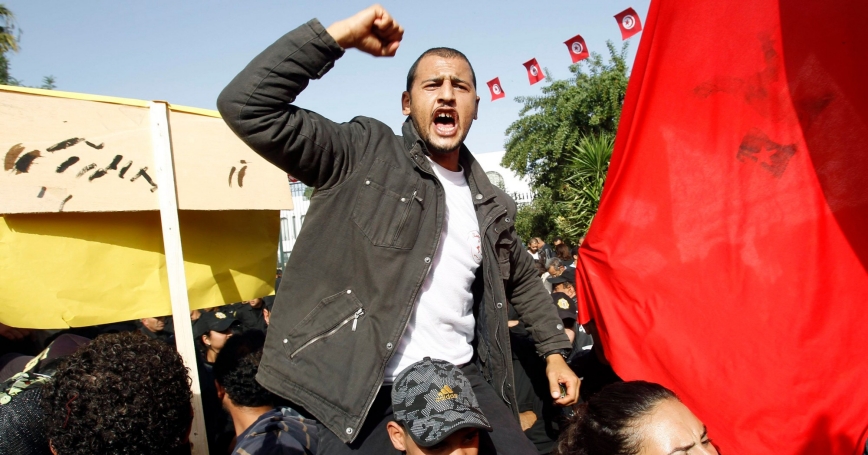 A protester shouts during a demonstration outside the parliamentary building in Tunis, Tunisia, November 22, 2011

It has been a year since Mohammed Bouazizi set himself on fire to protest his treatment by a corrupt and abusive policewoman in Cite Bousaid in Tunisia. In that year, the Middle East and North Africa has seen revolution, rebellion, repression, and reform. What has changed? How did it happen? What's next? And what does it mean, for America and for the world?

It's easiest to say what has changed: Populations in the region have gone from being "objects" to "actors" in their own history. From the Tunisians who discovered that their passion and mass peaceful protests could topple a supposedly impregnable regime, to the courageous Syrians who defy bloody repression even now, the "Arab Spring" at its core is seen as a change in popular attitudes. Arabs emphasize the importance of "dignity," or a rejection of the "humiliations" of their treatment by authoritarian regimes. Just the thought of self-determination is revolutionary, as such ideas have been at other times in history.

Egyptian and Tunisian uprisings were called the Facebook or Twitter revolutions, and these tools undoubtedly made it easier to mobilize social networks quickly for protest. But older technologies likely played an even bigger part in the transmission process: Al Jazeera and other Arab language satellite TV channels conveyed emotions of the crowds in real time. Text messages through ubiquitous (and anonymous) pay-as-you-go cellphones reached thousands in minutes. In Syria and Yemen, cellphone cameras—coupled to YouTube—ensured the sights and sounds of repression were seen despite efforts of governments to prevent it.

The Arab Spring demonstrated that leaderless revolutions are difficult to repress or co-opt. Unfortunately, it is also true that leaderless revolts find it difficult to make transition to authority, as we now are seeing in Libya and Egypt. For all the commonalities in spirit, the Arab Spring unfolded in distinct national ways. And now, the region's future will depend on how countries such as Egypt build new governments, and the policies these governments pursue.

Where revolts have succeeded (Tunisia, Egypt, Libya) what comes next is the hard work of building more democratic and more responsive states. Coming struggles will be over constitutions and elections. Diversity of interests and complicated decisions will undercut Arab Spring zeal. Countries like Egypt also will struggle to find new sources of economic growth to meet the needs of youthful populations which are poorly trained for success in the global economy. It may require public policy experimentation to find good solutions, and the first attempts of novice, unstable governments may well fail.

In Syria, bloodshed and repression will continue as the Assad regime hangs on, apparently determined to give no quarter and hopeful its neighbors will eventually relent on sanctions. That is hardly viable over the long-term, but it appears Syrians and the Syrian economy will suffer badly before the regime cracks.

What does it mean for the U.S. and the world? The Arab Spring was never primarily about America, even though its relationships with autocrats like Mubarak have been rightly scorned. Nonetheless, the U.S. certainly will be affected. Properly managed, democratic change provides an opportunity to "reboot" U.S. relationships and help these new regimes succeed in meeting their (empowered) populations' aspirations, which would benefit the wider world. Alternatively, weak governments failing to meet expectations could resort to time-tested strategies of assigning blame to external villains, including Israel, the U.S., or the West in general.

There are specters of trouble ahead. There are signs of rising sectarianism. Violence against Copts in Egypt, Sunni-Alawite-Kurdish tensions in Syria, Sunni-Shia rivalries in Bahrain, and the caldron of sectarian and tribal struggles in Yemen are evidence of the re-emergence of ancient suspicions at a time of rapid change. In Libya, regional and tribal rivalries must be reconciled in order to construct a viable state. In Egypt, the military, which seemed to be a hero of Tahrir Square for pushing Mubarak aside, of late has been reluctant to concede power.

While the West wants to help transitions succeed, its financial crises mean there can't be a big wave of new assistance, such as that which helped the Central Europeans or Balkan countries make it through their transitions. This may not be a bad thing, as it will require assistance to be focused on areas where it can do the most good. We will need to learn how to structure security assistance and rule of law training in ways that help, rather than hinder, democratic transitions. Israel will need to re-think its relationships with its neighbors. And we need to hold our nerve if Islamists win the right to form a government in Egypt. Power may engender responsibility, and the Egyptians deserve to have the leaders they select.

It has been an extraordinary year for the region. In the last 30 years similar waves of democratic change largely succeeded in establishing stable democratic governments in Latin America, Asia, and Africa. There are reasons for optimism on this score for the Middle East, but it will not be easy, or without reversals and bloodshed.

Charles Ries is Director of the Center for Middle East Public Policy at the RAND Corporation, a nonprofit institution that improves policy and decisionmaking through research and analysis, and former U.S. Coordinator for Economic Transition in Iraq.

This commentary originally appeared on GlobalSecurity.org and The RAND Blog on December 20, 2011. Commentary gives RAND researchers a platform to convey insights based on their professional expertise and often on their peer-reviewed research and analysis.