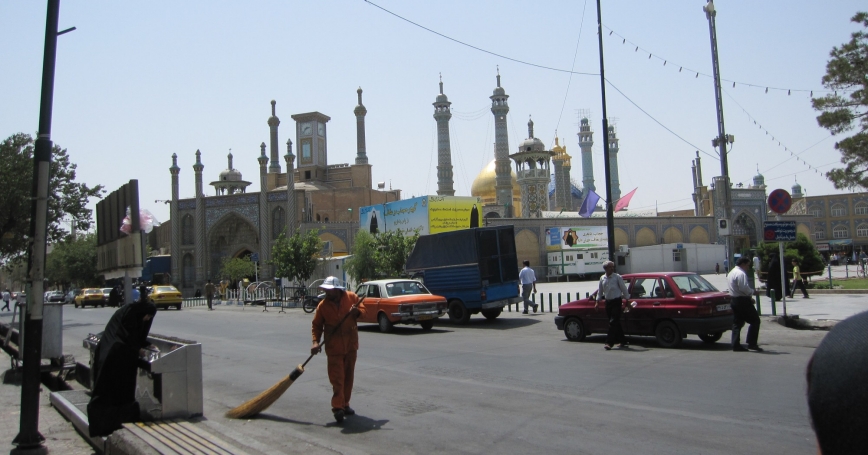 A street in Qom, Iran

Virtually unnoticed, since late 2001, Iran has held some of al Qaeda's most senior leaders. Several of these operatives, such as Yasin al-Suri, an al Qaeda facilitator, have moved recruits and money from the Middle East to central al Qaeda in Pakistan. Others, such as Saif al-Adel, an Egyptian that served as head of al Qaeda's security committee, and Abu Muhammad al-Masri, one of the masterminds of the 1998 U.S. embassy bombings in East Africa, have provided strategic and operational assistance to central al Qaeda. The Iranian government has held most of them under house arrest, limited their freedom of movement, and closely monitored their activities. Yet the organization's presence in Iran means that, contrary to optimistic assessments that have become the norm in Washington, al Qaeda's demise is not imminent.

Perhaps more disturbing, Iran appears willing to expand its limited relationship with al Qaeda. Just as with its other surrogate, Hezbollah, the country could turn to al Qaeda to mount a retaliation to any U.S. or Israeli attack. To be sure, the organization is no Iranian puppet. And the two have sometimes been antagonistic, as illustrated by al Qaeda in Iraq's recent attacks against Shias. But both share a hatred of the United States. U.S. policymakers should think twice about provoking a closer relationship between them and should draw greater public attention to Iran's limited, but still unacceptable, cooperation with al Qaeda.

Evidence of the Iranian-al Qaeda partnership abounds—and much of it is public. This past year, I culled through hundreds of documents from the Harmony database at West Point; perused hundreds more open-source and declassified documents, such as the U.S. Department of Treasury's sanctions against al Qaeda leaders in Iran; and interviewed government officials from the United States, Europe, the Middle East, and South Asia.

Through that research, the history of al Qaeda in Iran emerges as follows: over the past several years, al Qaeda has taken a beating in Iraq, Pakistan, Yemen, the Horn of Africa, and North Africa. In particular, an ongoing campaign of drone strikes has weakened—although not eliminated—al Qaeda's leadership cadre in Pakistan. But the group's outpost in Iran has remained almost untouched for the past decade. In late 2001, as the Taliban regime collapsed, most al Qaeda operatives fled Afghanistan. Many of the leaders, including Osama bin Laden and Ayman al-Zawahiri, bin Laden's deputy and future successor, headed for Pakistan. But some did not, choosing instead to go west. And Iran was apparently more than willing to accept them. Around October 2001, the government dispatched a delegation to Afghanistan to guarantee the safe travel of operatives and their families to Iran.

Initially, Iran's Quds Force—the division of the Revolutionary Guard Corps whose mission is to organize, train, equip, and finance foreign Islamic revolutionary movements—took the lead. Between 2001 and 2002, it helped transport several hundred al Qaeda-linked individuals. By 2002, al Qaeda had established in Iran its "management council," a body that bin Laden reportedly tasked with providing strategic support to the organization's leaders in Pakistan. Key members of the council included Adel, Sulayman Abu Ghayth, Abu al-Khayr al-Masri, Abu Muhammad al-Masri, and Abu Hafs al-Mauritani. All five remained influential over the next several years and retained close ties to bin Laden. Among the most active of the council, Adel even helped organize groups of fighters to overthrow Hamid Karzai's regime in Afghanistan and provided support for the May 2003 terrorist attacks in Riyadh.

According to U.S. government officials involved in discussions with Iran, over time, the growing cadre of al Qaeda leaders on Iranian soil apparently triggered a debate among senior officials in Tehran. Some worried that the United States would eventually use the terrorist group's presence as a casus belli. Indeed, in late 2002 and early 2003, U.S. government officials held face-to-face discussions with Iranian officials demanding the regime deport al Qaeda leaders to their countries of origin. Iran refused, but around the same time, the country's Ministry of Intelligence took control of relations with the group. It set to work rounding up al Qaeda members and their families.

By early 2003, Tehran had detained all the members of the management council and their subordinates who remained in the country. It is not entirely clear what conditions were like for al Qaeda detainees. Some apparently suffered through harsh prison confinement, while others enjoyed informal house arrest with freedom to communicate, travel, and fundraise. Over the next several years, bin Laden, Zawahiri, and other leaders apparently sent messages to Tehran threatening to retaliate if al Qaeda personnel and members of bin Laden's family were not released. Iran did not comply. Bin Laden did not follow through....

This commentary originally appeared on Foreign Affairs on January 29, 2012. Commentary gives RAND researchers a platform to convey insights based on their professional expertise and often on their peer-reviewed research and analysis.