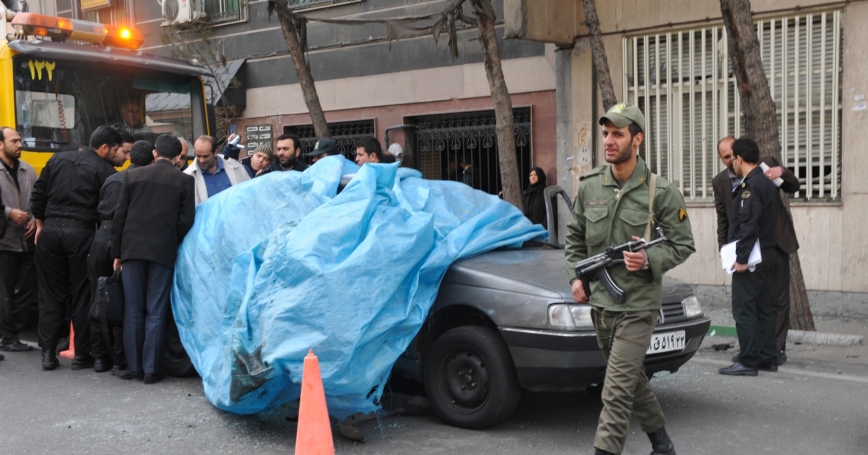 A policeman walks past the car belonging to Iranian nuclear scientist Mostafa Ahmadi-Roshan at a blast site in Tehran, January 11, 2012

Facing an unprecedented array of sanctions imposed by the United States and Europe, Iran's leaders opened 2012 by announcing that a new uranium enrichment site in the mountains near Qom would soon become operational. The recent assassination of an Iranian nuclear scientist—believed by many to be another strike by Israel in a covert campaign to slow Iran's nuclear program—has only further raised tensions between Iran, the West, and Israel. The assassination and related sabotage efforts may not ultimately halt Iran's program, and may in fact provoke an Iranian response that would increase the odds of escalation leading to a conventional conflict. Thus begins the latest round in the perennial international guessing game: will this be the year that Israel uses military force to try to thwart Iran's nuclear ambitions?

To hear it from U.S. politicians, the Iranian nuclear program is a threat to Israel's very existence. Some urge the Obama administration to publicly support Israel's position by leaving "all options on the table"—diplomatic speak for a military strike. But before heading down the road of military action, those concerned for Israeli security should understand not only the risks of using force against Iran. They should also take heed of the complexity of Israeli views toward Iran.

The Israeli security establishment and public see Iran as one of Israel's gravest strategic challenges today. This was not always the case. For decades Israel and Iran perceived common threats, such as Iraq, pan-Arab nationalism, and communism, leading to extensive if tacit cooperation during the Shah's rule and even after the 1979 Iranian revolution. These common fears no longer exist. Instead, what Israelis see, through Iran's financial and military links to groups like Hezbollah and Hamas, is an aggressive, bellicose Iran on its borders, making the continued expansion of its missile and nuclear programs all the more threatening.

Israeli leaders also take seriously Iran's vitriolic rhetoric and anti-Zionist ideology, even if many Israeli analysts question the likelihood of Iran committing suicide in the future by using nuclear weapons against what is widely believed to be an extensive Israeli nuclear capability. Yet even Israelis who believe Iran is ultimately a rational actor most interested in survival still worry about the leverage and cover nuclear weapons would give Iran, limiting Israeli flexibility and leading to an unstable and dangerous relationship that would not resemble the relative stability of Cold War deterrence.

Nonetheless, important divisions are emerging within the Israeli strategic community over how to deal with the Iranian nuclear challenge. U.S. politicians may feel comfortable with framing Iran as an existential threat to Israel, but not all Israeli leaders do. An increasing number are concerned that overplaying the "existential threat" card may erode Israel's own ability to deter a future Iranian bomb, suggesting that Israel could not protect itself from a nuclear Iran. Many have stopped using this term in public. Other leaders prefer to talk about Iran as a global problem rather than focus on Iran as Israel's problem in order to enhance the international coalition that has emerged to pressure and isolate the Islamic Republic.

Perhaps the most interesting debate in Israel today is over the question of a military strike. Last year, former Mossad head Meir Dagan publicly argued that a military attack would be a "dumb idea," that would trigger region-wide conflict. But well before Dagan's statements, Israeli leaders and analysts had been quietly debating the merits and feasibility of a military strike. For some, a military strike would be worth the costs even if the nuclear program were only delayed (very few believe it could be destroyed); they think that the risks of Iranian retaliation against Israeli and U.S. targets may be exaggerated. Others believe that a delay in the program could be more effectively achieved through other measures, including sabotage and continued diplomatic and economic isolation, with far fewer costs and risks of wider regional military escalation.

It is difficult to know who has the upper hand in Israel at the moment. Reports suggest that Prime Minister Benjamin Netanyahu is sympathetic to striking Iran if the alternative is an Iranian breakout capability under his watch. But it is not clear that the Israeli military and certainly Israeli intelligence analysts share this view; many may in fact hold positions closer to U.S. assessments that are less alarmist about the timeline of the Iranian program and more cautious about the utility of a military option. Much has been made over differences between the U.S. and Israeli threat perceptions of Iran, but in fact these internal Israeli divisions suggest that the gap may not be as great as some suggest.

U.S. policymakers have every reason to be concerned about the threat Iran poses to Israeli security, not to mention U.S. and international security. Private assurances to Israeli leaders make sense at a time of escalating regional tensions. But public statements focusing on Iran as a threat to Israel's existence and openly discussing military options that neither U.S. nor Israeli leaders may believe are prudent may only weaken Israel's position.

Dalia Dassa Kaye is a senior political scientist at the RAND Corporation and a visiting fellow at UCLA's Burkle Center. She is co-author of a recently released RAND report, "Israel and Iran: A Dangerous Rivalry."

This commentary originally appeared on ForeignPolicy.com on January 12, 2012. Commentary gives RAND researchers a platform to convey insights based on their professional expertise and often on their peer-reviewed research and analysis.