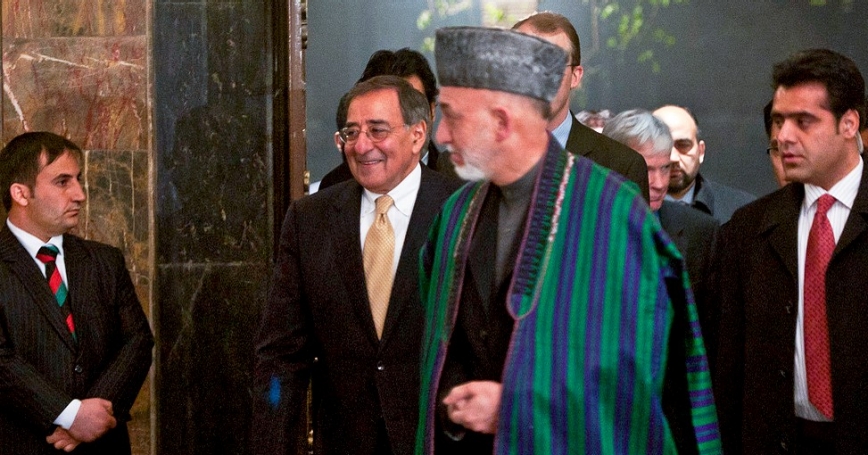 Photo by Erin A. Kirk-Cuomo/U.S. Dept. of Defense

In 1968 I began my life in diplomacy as an aide to Averell Harriman and Cyrus Vance, who were heading peace talks with the North Vietnamese in Paris. Thirty-four years later, I ended that career as the George W. Bush administration's first special envoy to Afghanistan, appointed weeks after the Sept. 11, 2001, attacks. Like Richard Holbrooke, my contemporary on the Paris delegation and my eventual successor as envoy to Afghanistan, I have been struck by parallels between the two wars and the two peace processes, the first of which ultimately ended in failure and the second of which is only now taking shape, the fruit of much effort by Holbrooke and his successor, Ambassador Marc Grossman.

A recent Post editorial ["Talking with the Taliban," Jan. 5] was right to note that the Taliban's preference for negotiating with Washington rather than with Kabul is similar to North Vietnam's preference for negotiating with the United States rather than with the government in Saigon. And we all know how that process ended, with the total withdrawal of U.S. forces, a North Vietnamese invasion, the collapse of South Vietnamese resistance and the disappearance of South Vietnam. President Richard Nixon and Secretary of State Henry Kissinger have since been accused of seeking from those negotiations no more than "a decent interval" between the U.S. withdrawal and the South Vietnamese collapse. The Post expressed anxiety that the Obama administration may have a similar objective.

This is a reasonable enough fear, but so far President Obama has done nothing to substantiate it. The 1973 agreements that formally ended the Vietnam War were reneged upon by both North Vietnam and the United States, the former by invading the South and the latter by cutting off the military and economic assistance it had promised the South to induce Saigon to sign those agreements. Those promises even included a U.S. commitment to resume bombing North Vietnam should it not fulfill its end of the bargain.

In contrast, administration officials have made clear that U.S. forces will remain in Afghanistan indefinitely after Afghan forces assume responsibility for the conduct of major combat operations in 2014. President Hamid Karzai has said the same. American and Afghan officials are currently negotiating a formal agreement to this effect.

Some may see negotiation as an easy or quick way out of Afghanistan, but the Vietnamese analogy suggests otherwise. The Paris talks lasted more than five years, whereas the Afghan process has not yet begun. Throughout those years the U.S. engagement in Vietnam was larger and more costly than the current U.S. engagement in Afghanistan in both blood and treasure. Throughout those years U.S. opposition to the war was much more intense than anything we have seen in the past decade. Yet the existence of negotiations served throughout most of that period as a rationale for continuing the fight, not for ending it. One cannot prove a counterfactual assumption, but I expect most historians would agree that, in the absence of the Paris peace talks, the U.S. withdrawal from Vietnam would have come even earlier.

In one respect the two peace processes are quite distinct. The Vietnam negotiations arose from a U.S. initiative, in response to domestic political imperatives and over repeated objections from the Saigon regime. By contrast, the incipient Afghan process has its roots in that society, not ours. Repeated polling shows overwhelming support throughout Afghan society for peace talks with the Taliban. Responding to this, Karzai has championed the concept for years, only gradually overcoming skepticism from the Bush and Obama administrations.

It's certainly true that Karzai would prefer to be at the center of the process than at the periphery, where the Taliban is trying to keep him. It's also true that if Washington does not soon overcome the Taliban's resistance to direct Afghan government participation, the talks will not go far. But U.S. officials surely recognize this as their proximate objective in these talks and will condition progress on substantive issues on so expanding the participation.

The U.S. failure in 1975 to enforce adherence to the peace accord North Vietnam signed two years earlier derived largely from the domestic political effects of Watergate, President Nixon's resignation and the consequent, if short-lived, collapse of presidential authority. A similar failure might follow the conclusion of a peace agreement in Afghanistan. But if it does, failure will occur with or without such an accord.

In 2010 I joined several former officials in testing the waters for an Afghan peace process by talking to all the potential participants, including Taliban intermediaries. We concluded that the time was right and so advised the U.S. administration. Certainly the United States will need to be prepared to enforce any agreements it reaches in such talks. Whether Washington proves willing to do so will depend not on the presence or absence of a peace agreement but, rather, on the resilience of U.S. support for a commitment that will certainly require no more of it in the presence of an accord than in its absence.

James Dobbins, a longtime diplomat and former U.S. envoy to Afghanistan, is the author of "Afghan Peace Talks: A Primer." He directs the International Security and Defense Policy Center at the RAND Corporation.

This commentary originally appeared in The Washington Post on January 13, 2012. Commentary gives RAND researchers a platform to convey insights based on their professional expertise and often on their peer-reviewed research and analysis.