(NYTimes.com on February 24, 2012 and in International Herald Tribune) 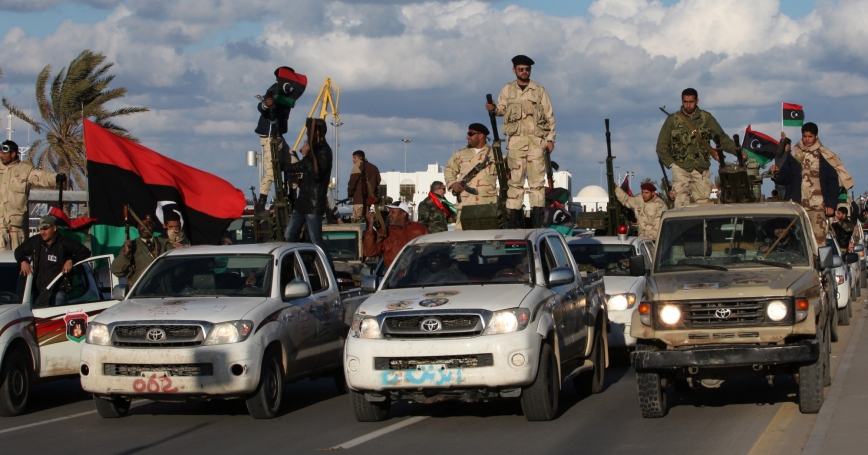 Members of the Libyan military force under the ruling of the National Transitional Council wave their national flag along a street in Tripoli February 14, 2012

While the world's attention is fixed on the worsening bloodshed in Syria, Libya teeters dangerously on the brink.

The Libyan government sits on the sidelines avoiding conflicts with militias it cannot control. Recent attempts to subdue Qaddafi holdouts in the town of Bani Walid ended in humiliation; government forces were outgunned and outfought. Their weakness results from the lack of a crucial institution for state building: a national army.

Government officials recently announced plans to disarm the militias and integrate former rebels into the army. But there is no army structure to absorb these young fighters — and increase public confidence in the government's ability to otherwise disarm them. While NATO countries and allies like Jordan and Qatar have started to train and equip the security forces, there is more that outsiders can do to help.

Washington has a window of opportunity to shape Libya's civil-military relations and promote democracy and economic growth as well as help stabilize North Africa. The United States will find that the Libyan military is a blank slate. Unlike Egypt, Libya has no junta of generals who might obstruct a democratic transition. Muammar el-Qaddafi, fearful of coups, entrusted little authority to the senior ranks of the military. He put his son Khamis, a captain, in charge of the army's most capable unit, the Khamis Brigade. That unit, along with the army's organizational structure, disintegrated during the war.

Equipment stores are in shambles. There is a serious shortage of junior-level officers, a legacy of Qaddafi's decision to train young officers only for the regime's elite units. Key priorities are training and education. The focus needs to be on basic soldiering skills, and on educating the next generation of Libyan officers in areas like civil-military relations, the rule-of-law and human rights.

The United States has earmarked $350,000 for the training and education of the Libyan military, a small amount compared with the U.S. military engagement with Libya's neighbors and hardly enough to help rebuild Libya's defense institutions. Most of these funds may be a holdover from the appropriately limited U.S. aid at the end of the Qaddafi era, but the logic for these limits no longer holds.

In addition to training, the Libyan military urgently needs relatively inexpensive and nonlethal items: spare parts for vehicles, aircraft and ships; uniforms and protective gear for soldiers, and border control technology. Basic communications systems are especially urgent. Under Qaddafi, communications technology went primarily to the intelligence service, rather than to army and police forces. Larger equipment items can be purchased in time by the Libyan government when their oil flows resume. What is critical now is advice about how to create an institutional structure for the military and its strategic planning.

Lebanon provides an example of how this kind of low-key assistance can pay huge dividends. By many accounts, the Lebanese Army is widely regarded as the most trusted institution in that fragmented country. In 2007, it earned praise from all sectors of Lebanese society during its fight against Sunni militants in the Nahr al-Bared refugee camp. U.S. equipment transfers and training proved crucial in winning that battle. Today, in the shadow of Syria's civil war, the Lebanese Army may well be the only institution holding the country together.

An army is not the sole cure for Libya's ills. Economic development, a robust private sector, an independent judiciary, civil society and an empowered Parliament are all part of the equation. Before these institutions can take root, security must be present.

Frederic Wehrey is a senior policy analyst at the RAND Corporation, a nonprofit research institution.

This commentary originally appeared on NYTimes.com on February 24, 2012 and in International Herald Tribune on February 25, 2012. Commentary gives RAND researchers a platform to convey insights based on their professional expertise and often on their peer-reviewed research and analysis.