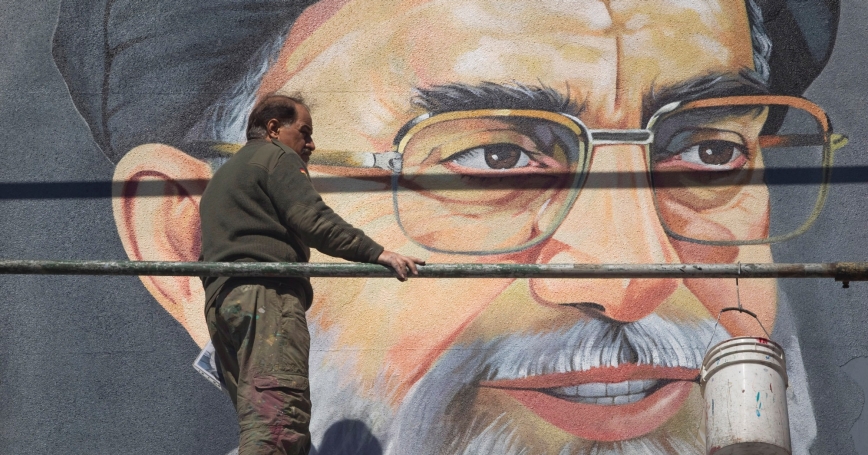 An Iranian worker rests in front of a huge portrait of Iran's Supreme Leader Ayatollah Ali Khamenei during Friday prayers in Tehran, February 24, 2012

Iranians are now gripped by a sense that their nation stands at a precipice. The Islamic Republic faces potentially devastating new international sanctions as well as possible Israeli military strikes on its nuclear facilities. Normally inured to insecurity, war and endemic crises, Iranians are now hoarding foodstuff and dollars, ready for the worst.

But where Iranians sense disaster, Khamenei may see opportunity.

During his February 3 Friday prayer speech, the supreme leader said that Tehran would not stop its nuclear program despite growing sanctions and other pressures. He chastised the United States for keeping "all options on the table," and warned that any attack on Iran would be "ten times worse" for the United States.

His bold assertions reflect his unique calculations, which are critical in understanding how the growing crisis could play out. As supreme leader for almost a quarter century, he will ultimately make the final decision over whether to weaponize a program that Tehran claims is simply for peaceful nuclear energy.

For Khamenei, Iran's crisis with the West is not the moment to back down. The reasons have as much to do with domestic politics as foreign policy. To him, the nuclear crisis represents a test of survival for the Islamic Republic—and even more for his own faltering leadership. How Khamenei fights this battle will not only determine Iran's nuclear future, but possibly the fate of the entire revolutionary regime.

Khamenei is not an irrational actor, however. His possible intent in developing a nuclear weapons capability almost certainly is not to destroy Israel, but rather to guard against a foreign attack or counter an internal challenge. Acquiring a nuclear weapons capability might boost the regime's image at home, a political benefit rarely taken into account in understanding Iran's motivations.

Like most Iranian leaders, Khamenei may feel that a nuclear weapons capability is worth pursuing as long as the costs do not outweigh the benefits. He has acknowledged the pain of sanctions. His regime certainly feels the effect of Iran's currency depreciation and Europe's embargo of Iranian oil.

But the supreme leader may believe that other factors alleviate pressures on Iran. In his anniversary speech, Khamenei said that the West, specifically the United States, is in economic and geopolitical "decline."

Khamenei also apparently believes that the Arab uprisings—which he described as an "Islamic Awakening"—have weakened America's position in the Middle East. Despite evidence to the contrary, he also appears to think the uprisings have strengthened Iran's influence as an alternative model for the region.

More basically for Khamenei, resistance to the United States has been a key pillar of the Islamic revolution since 1979. Iran's suspected nuclear program may not merely be a form of military deterrence; it could also serve as a measure of Iran's success as a revolutionary state and even a scientific achievement that can restore the country to international power. To him, compromising now, especially under intense pressure, would undermine the Islamic Republic.

The supreme leader rarely reveals the full extent of his thinking. His views can also be opaque. He is not known for scholarship or extensive writing, unlike his predecessor, revolutionary leader Ayatollah Ruhollah Khomeini. Understanding his calculations is limited to his occasional sermons, public statements and the regime's actions, over which he has near absolute authority.

Based on all three, however, Khamenei has implied that at least he may be willing to stand up to U.S. and international pressure on grounds that Iran can absorb the pain of sanctions—and that time is on its side. He may even believe that his regime could benefit from an Israeli attack by rallying nationalist fervor.

At the same time, costs are beginning to grow. His leadership is increasingly questioned not only by ordinary people, but also reportedly by members of the elite, including the Revolutionary Guards. Khamenei may be ready for battle, but the army behind him may be much smaller than he believes.

Khamenei's greatest vulnerability may be his reputation for stubbornness. His predecessor, Ayatollah Khomeini, was more inclusive in his decision-making and more willing to make tough choices. After eight years of war with Iraq, he opted to drink from a "poisoned chalice" and accept terms of a U.N. ceasefire to end a conflict in which more than 100,000 Iranians died.

But Khamenei is widely viewed as unwilling to take advice from anyone outside his shrinking inner circle. He has excluded the reformists from the political system and has slowly marginalized former president Ayatollah Akbar Hashemi Rafsanjani, who is considered more pragmatic and cautious on foreign policy. Many Iranians are increasingly concerned that the supreme leader is taking Iran down a dangerous path and is unwilling to turn back, whatever the pressures.

Alireza Nader, co-author of Coping with a Nuclearizing Iran (2011), is a senior policy analyst at the RAND Corporation, a nonprofit institution for research and analysis. This article is presented by Tehran Bureau, the U.S. Institute of Peace, and the Woodrow Wilson International Center for Scholars as part of the Iran project at iranprimer.usip.org.

This commentary originally appeared on PBS FRONTLINE on February 23, 2012. Commentary gives RAND researchers a platform to convey insights based on their professional expertise and often on their peer-reviewed research and analysis.