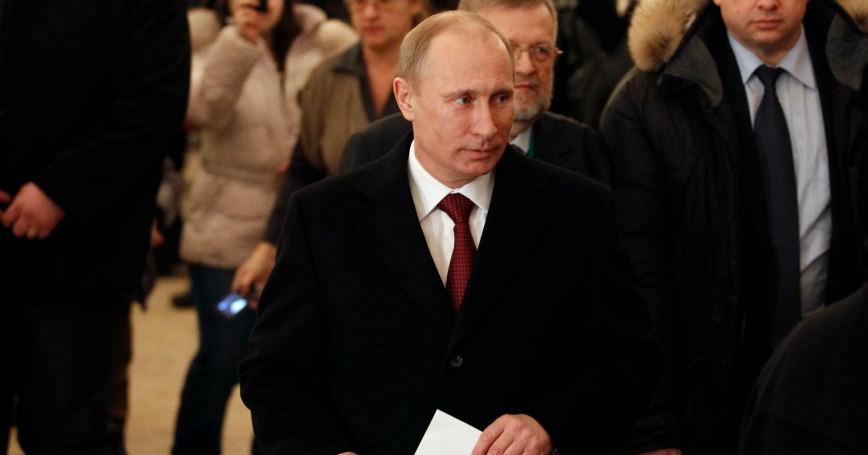 Russian Prime Minister Vladimir Putin walks with his ballot papers before voting in a polling station in Moscow, March 4, 2012

Russian Prime Minister Vladimir Putin unnerved many Russians and foreigners alike when he announced in September that he wanted to switch places with his handpicked successor, President Dmitry Medvedev. Although Putin is widely expected to win back the presidency in the election on Sunday, his popularity is sagging, and Russians have taken to the streets in the largest anti-government demonstrations since the early 1990s. For more than a decade, Putin has portrayed himself as a plain-spoken tough guy who saved Russia from chaos — an image threatened by the current unrest. As Russians vote, let's separate the man from the myths.

1. Putin's expected election triumph will set him up to be president for life.

It's true that during his presidency and his tenure as prime minister, Putin has ruled Russia like a latter-day czar. He has ended direct elections for regional governors, subdued unruly oligarchs, marginalized political opposition, and neutered the judiciary, the news media and Russia's legislature, the Duma. But Putin's neo-czarist system has been sputtering for some time. Slower economic growth, crime, corruption and a bloated bureaucracy have led many Russians to say "Dostali!" ("We are fed up!")

So after Putin announced his plans to return to the Kremlin, and activists with cellphone cameras documented ballot-stuffing during Duma elections in December, something snapped. Subsequent street protests shattered Putin's aura of invincibility and his image as a good czar. The ruling United Russia party, which took a drubbing at the polls, may be rebranded or dismantled. Medvedev, seeking to mollify the protesters, is reinstating elections for regional governorships; the incumbents will have every incentive to distance themselves from Moscow.

This treacherous political environment will force Putin to govern with real give and take, something he's hardly accustomed to. Some in Moscow's chattering class even suggest that he could be forced from office in the next year or two and that he needs to start grooming a successor who can help him exit with dignity — and with immunity from prosecution. That may be wishful thinking, but Putin is now fighting for his political life.

2. Putin can use Russia's vast energy resources as a political weapon.

Russia's oil and gas reserves have made the country fabulously wealthy and a crucial supplier for Europe and other energy markets. When a commercial dispute with Ukraine left hundreds of thousands shivering across Central and Eastern Europe in January 2006 after the Russian energy company Gazprom turned off the tap, many observers warned that energy had become Putin's latest weapon.

But the Russian economy is the real hostage. In 2011, revenue from oil and gas accounted for about halfthe federal budget, and raw materials made up more than 85 percent of exports. Thanks to a huge trade surplus, enormous currency reserves and an overvalued ruble, Russia's domestic industries have become uncompetitive against imports — a textbook case of what economists call "Dutch disease."

Adding to these challenges are changes in the European natural gas market. With European demand depressed and stiff competition from cheaper liquefied natural gas from the Middle East and North Africa, Russia's share of the E.U. gas market fell from 48 percent in 2001 to 34 percent in 2009. As government spending balloons because of a massive military buildup and Putin's campaign promises of more robust social programs, Russia's oil weapon will be increasingly pointed at itself.

Putin's 2005 statement that the collapse of the U.S.S.R. was "the greatest geopolitical catastrophe of the century" — along with Russia's war with Georgia in 2008 — provoked fears about his designs on Russia's neighbors. So have his hazy plans for a Eurasian Union consisting of former Soviet republics and the recent launch of a customs union with Kazakhstan and Belarus.

Putin's more ambitious plans for outright political union appeal mostly to older Russians nostalgic for the Soviet past. He knows that the leaders of neighboring countries aren't going to hand over their sovereignty anytime soon. He also realizes that the relatively affluent Russian public doesn't like forking over subsidies to support poorer neighbors or dealing with a flood of migrant workers. As Putin himself put it: "Whoever does not miss the Soviet Union has no heart. Whoever wants it back has no brain."

4. A decisive Putin victory would be a crushing blow for pro-democracy forces.

The dirty secret is that Putin could legitimately win big on Sunday. Polls show him poised to avoid a runoff. He retains significant support in smaller cities and in the countryside, areas where two-thirds of the Russian electorate resides.

It scarcely matters. Reliable polling data from the Levada Center show that 35 percent of voters are inclined to reject the legitimacy of a Putin victory. More affluent, urban and Internet-savvy than the population as a whole, these people have greatly benefited from Putin's rule. Yet they are likely to view a landslide victory as fraudulent. Even a squeaker, echoing Putin's 53 percent showing in the 2000 presidential contest, would probably provoke accusations that someone had a finger on the scale.

With anti-government demonstrations already planned for next week and Putin warning that opposition leaders are plotting to kill one of their own to discredit him, the stage is set for new confrontations.

Building rapport with Putin, who has never been shy about his anti-Americanism, is not going to be easy. He's almost 10 years older than President Obama and professes to use neither a cellphone nor the Internet. Dealings between the two men are unlikely to match the friendly tone of Obama's meetings with Medvedev. Throw in recent angry exchanges over Syria, Iran and alleged American interference in Russian politics, and you have the makings of a contentious relationship.

Yet Putin has shown he's able to act pragmatically when it serves Russia's interest. Witness his strong support for Washington after the Sept. 11, 2001, attacks, Russian votes in the U.N. Security Council in 2009 and 2010 to tighten sanctions on Iran, the 2010 New START nuclear arms reduction treaty and the creation of a supply corridor across Russian territory for U.S. forces in Afghanistan.

There are plenty of important issues on the agenda — nuclear nonproliferation, terrorism, the dangerous situation in Pakistan and the wobbly global economy — on which U.S. and Russian interests more or less converge. An experienced leader such as Putin, who prides himself on being cold-hearted and calculating, surely figured that out long ago.

Andrew S. Weiss is the director of the RAND Center for Russia and Eurasia and served on the National Security Council staff during the Clinton administration.

This commentary originally appeared in The Washington Post on March 4, 2012. Commentary gives RAND researchers a platform to convey insights based on their professional expertise and often on their peer-reviewed research and analysis.