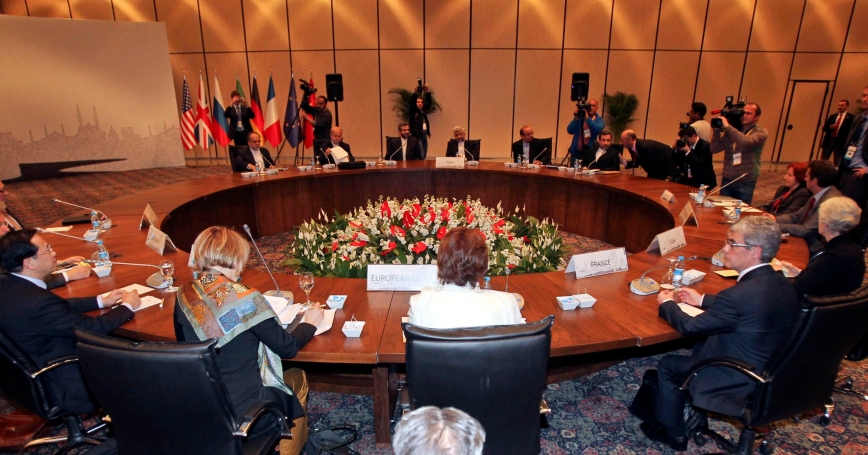 What did Iran get out of the talks with the six major powers—U.S., Britain, France, China, Russia and Germany—at the first diplomatic meeting in Istanbul?

Iran apparently took a constructive approach at the first round of talks, according to Western diplomats at the talks. Tehran's attitude at this point in time should come as no great surprise. The Islamic Republic is under tremendous economic and political pressure. U.S. sanctions against the Iranian Central Bank have caused major economic disruptions. The European embargo on Iranian oil, set to begin this July, will further weaken Iran's oil-dependent economy.

But the talks also demonstrate that the Iranian regime has substantial leverage over the so-called P5+1 major powers and the larger international community. Iran's nuclear program continues to make progress. Tehran is slowly approaching the point at which it can create nuclear weapons if the leadership chooses to do so. The lack of an effective military option may enhance Iran's bargaining position. Iranian leaders are aware of the costs of a military conflict—not just for Iran—as well as the costs for the United States and the international community. The talks are critical, and Iran holds the key to their success.

What did Iran's position indicate about its willingness to compromise?

Not much, since Iran has not yet made any concessions. Iran has come to the negotiation table, but this is a smart diplomatic move rather than a sign of compromise. It is not yet clear whether Iran is interested in actual compromises, such as stopping the enrichment of uranium to a higher grade (20%) and shipping its current stockpile out of the country to be exchanged for fuel for Tehran's research reactor.

If this stockpile remains in Iran, it can be used to make nuclear weapons in the future. Iran must also come clean regarding clandestine work directly related to nuclear weaponization. This would likely entail opening up sensitive military sites, such as Parchin, to international inspections. For Supreme Leader Ayatollah Ali Khamenei, this compromise would be politically risky—and a difficult one to make.

What else is at stake in these talks beyond the dispute over Iran's controversial nuclear program?

Plenty. Broadly speaking, the Iranian regime, including Khamenei, views the United States as being dedicated to undermining the Islamic revolution and overthrowing the Islamic Republic. The United States in turn is opposed to Iran's support for terrorist groups such as Hamas and Hezbollah, and has also condemned its widespread human rights abuses.

Both countries are vying for power and influence in the Middle East. The Arab Spring only sharpened the competition. Khamenei has portrayed the Arab uprisings as an "Islamic awakening" that will weaken the U.S. position in the Middle East.

The negotiations may be long, arduous, and ultimately unsatisfactory. There is a deeply ingrained sense of opposition to the Islamic Republic as a political system among major elements of the U.S. political establishment. This antipathy is shared by many U.S. allies in the Middle East. Khamenei often states that the major issue between the United States and his regime is not the nuclear program, but U.S. opposition to the Islamic Republic.

The United States may not be actively seeking to overthrow the Islamic Republic. But the campaign of sanctions—along with the mysterious sabotage of nuclear facilities and assassinations of nuclear scientists—may have convinced Iran's leaders that regime change is the ultimate goal. Beset by economic problems, political divisions, and domestic discontent, Iranian leaders may compromise—or appear to make compromises—to cushion the regime from the mounting internal and external pressures.

Alireza Nader, coauthor of Coping with a Nuclearizing Iran (RAND, 2011), is a senior policy analyst at the RAND Corporation, a nonprofit institution that improves policy and decision-making through research and analysis.

This article is presented by Tehran Bureau, the U.S. Institute of Peace, and the Woodrow Wilson International Center for Scholars as part of the Iran project at iranprimer.usip.org.