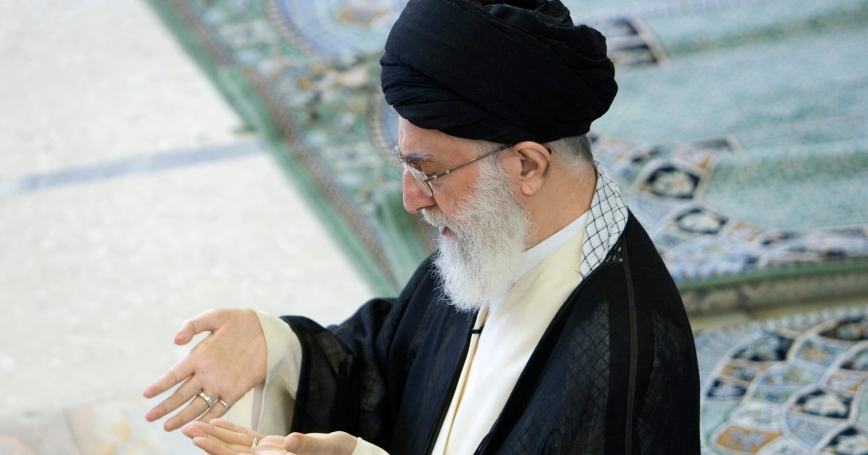 Iran's announcement that it is willing to return to negotiations over its nuclear program this month [April 2012] is encouraging but the question remains: Will it be amenable to or even capable of compromising?

The Iranian economy has no doubt been damaged by recent sanctions against Iran's Central Bank and will be more so by an upcoming European embargo of Iranian oil. Recent political developments in Iran may also facilitate engagement by the Islamic Republic with the United States and its partners. There have been small signs that Iran's Supreme Leader, Ayatollah Ali Khamenei, may now be better able to make concessions on the nuclear program than in the past.

But Khamenei's worldview and narrow political interests suggest that he may not be willing to make the sort of concessions that will satisfy the United States and its anxious ally, Israel.

Khamenei's consolidation of power and the weakening of President Mahmoud Ahmadinejad after the March 2012 parliamentary elections have streamlined Iran's nuclear decision-making. Iran's failure to reach an agreement on the nuclear-fuel swap deal in 2009 stemmed in part from post-election chaos following the disputed re-election of Ahmadinejad; Ahmadinejad's efforts to reach a deal with the P5+1 — the five permanent members of the UN Security Council plus Germany — were vigorously and successfully attacked from both the right and left of the Iranian political spectrum.

Ahmadinejad, whose term ends in 2013, is no longer a key player in Iranian politics. The opposition Green Movement and reformist leadership has also been largely silenced and sidelined.

Khamenei, having temporarily defeated his opponents, may now be more confident in engaging the P5+1 from a position of strength. He recently commended US President Barack Obama for his emphasis on diplomacy, not war, to resolve the nuclear crisis.

Khamenei has also extended Ayatollah Ali Hashemi Rafsanjani's term as the head of the Expediency Council, a body meant to advise the Supreme Leader on matters of state. Rafsanjani, a former Iranian president, is considered to be less ideological and more pragmatic on foreign-policy issues, including the nuclear program.

At the same time, the Supreme Leader perceives the nuclear program to be part of a broader conflict between the United States — which he calls "the global arrogance" — and the Islamic Republic, which he claims has resisted US domination "like a lion." Khamenei is well aware of the costs and dangers of sanctions against Iran, but he also believes that Iran can withstand sanctions while promoting self-sufficiency.

Khamenei has also indicated that Iran will meet pressure with pressure. Additional sanctions, he has suggested, will only spur further advances in the nuclear program.

The Supreme Leader's attitude may leave some room for compromise. But it is the United States and its allies that are expected to concede what he seeks: an end to the long conflict with the West on the Islamic Republic's terms. This translates into recognition of Khamenei's regime as the legitimate government of Iran and acceptance of its role as the premier power in the Persian Gulf.

Khamenei appears to believe that time is on his side — that what he calls the "Islamic awakenings" across the Arab world will shake off America's power while the Islamic Republic stands strong in the face of pressure.

Thus, the US goal of reaching a compromise that entails acceptance of limited uranium enrichment by Iran in return for more intrusive inspections is unlikely to be achieved.

Khamenei may engage the P5+1 on the nuclear program for short-term advantages to ease the international pressure on Iran. But he will not give up Iran's nuclear-weapons capability. The Iranian nuclear program is too deeply embedded in the regime's strategic conflict with the United States — a conflict which is not likely to be solved as long as Khamenei rules supreme.

Alireza Nader, co-author of Coping with a Nuclearizing Iran (RAND, 2011), is a senior policy analyst at the RAND Corporation, a nonprofit institution that seeks to improve policy and decisionmaking through research and analysis.

This commentary originally appeared on Al-Monitor on April 2, 2012. Commentary gives RAND researchers a platform to convey insights based on their professional expertise and often on their peer-reviewed research and analysis.