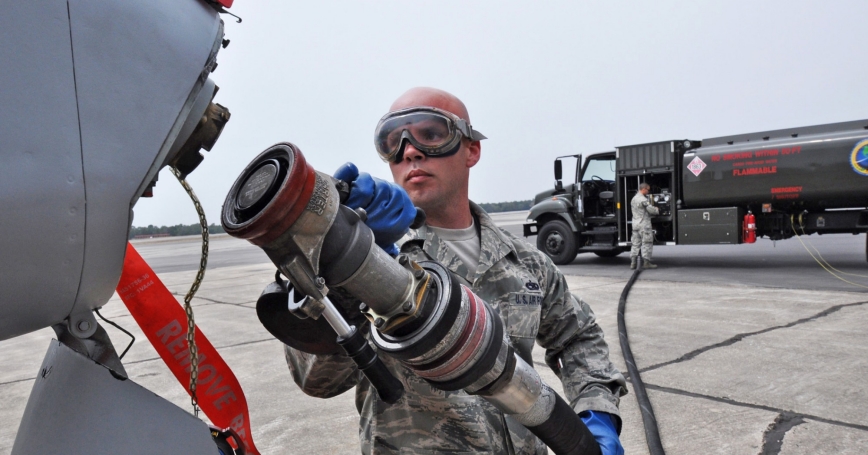 This commentary appeared on the National Journal's Energy Experts blog as a response to "Powering Our Military: What's the Role of Clean Energy?"

To reduce its reliance on petroleum-derived fuels, the U.S. Department of Defense (DoD) has spent hundreds of millions of dollars over the past few years to develop, test, and certify renewable fuels—that is, liquid fuels manufactured from renewable sources of energy like vegetable oil from seeds or algae, animal fat, or various types of biomass. Renewable fuels derived from hydrogenated renewable oils are produced by processing animal fats or vegetable oils (from seed-bearing plants such as soybeans, jatropha, and camelina) with hydrogen. Various types of algae also have high oil content and are another possible source of oil for hydrotreatment. Fifty-fifty blends of hydrotreated oils have been successfully demonstrated in flight tests sponsored by the commercial aviation industry, and laboratory analyses and testing strongly suggest that hydrotreated renewable oils can also be formulated for use in tactical weapon systems. Unfortunately, it is highly unlikely that appreciable amounts of these renewable oils can be affordably and cleanly produced in the near future.

Animal fats and waste vegetable oils may offer an affordable low-greenhouse-gas route to hydrotreated renewable oils, but currently available commodities are already used for other commercial purposes. Because the supply of these feedstocks is limited, substitutes would need to be found for use in other applications, and the substitutes may cause additional greenhouse gas emissions. Production potential is also an issue with animal fats and waste oils: The available supply of these feedstocks will likely limit production to no more than 30,000 barrels per day, which is less than two-tenths of a percent of the 18 million barrels of liquid fuels that are consumed each day in the United States.

With regard to feedstock vegetable oils, to keep lifecycle greenhouse gas emissions at levels lower than those of petroleum-derived fuels, these oils must be derived from crops that do not compete with food production and that minimize nonbeneficial direct and indirect changes in land use. Jatropha and camelina are often mentioned as ideal plants to meet these requirements, but there exists little evidence to back these claims. Even if low-greenhouse-gas approaches can be established and verified, total fuel production is likely to be limited. Producing just 200,000 barrels per day (about 1 percent of U.S. petroleum consumption) from these crops would require an area equal to about 10 percent of the croplands currently under cultivation in the United States.

Advanced approaches using algae or other microorganisms may offer a sustainable approach for producing hydrotreated renewable oils suitable for military applications. However, technological development challenges suggest that it is highly unlikely that these advanced approaches will constitute an important fraction of the commercial fuel market until well beyond the next decade.

Given the extremely small quantity of such fuels available on the global market, DoD investments in large-scale testing and certification of hydrotreated renewable oils are premature and should be discontinued.

Keith Crane is the director of the RAND Corporation's Environment, Energy, and Economic Development Program. These comments were submitted in Alternative Fuels for Military Applications by James T. Bartis and Lawrence Van Bibber, RAND Corporation, 2011, MG-969-OSD.

This commentary originally appeared on National Journal on May 23, 2012. Commentary gives RAND researchers a platform to convey insights based on their professional expertise and often on their peer-reviewed research and analysis.