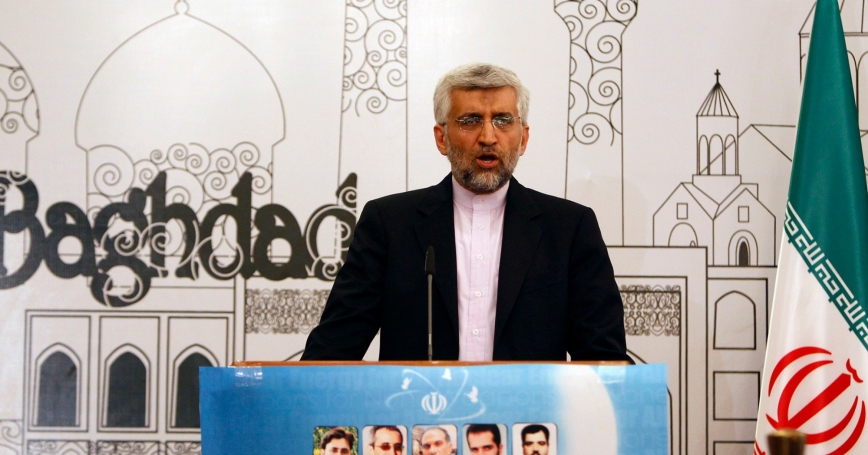 Iran's chief negotiator Saeed Jalili addresses a news conference after a meeting in Baghdad, May 24, 2012

The May 23 Baghdad talks between Iran and the P5+1 (United States, Britain, France, Russia, China, plus Germany) may prove to be a crucial juncture in the Iranian nuclear crisis. The talks could lead to a compromise with Iran while a lack of compromise could lead to an Israeli strike against Iran's nuclear facilities, and possibly a costly regional war involving the United States.

There is reason to be pessimistic. The Iranian regime, an opponent of U.S. interests in the Middle East, a supporter of terrorism, and a gross violator of human rights, is hardly trustworthy. Iranian officials, who have appeared to be more compromising and flexible recently, may well be buying Iran more time to make advances on the nuclear program.

However, the Iranian regime faces a crucial test as well. Iran's economy is battered and its population restive. Iran's Supreme Leader Ayatollah Ali Khamenei, faces a fractured and dysfunctional political elite. Sanctions against Iran's central bank, and the impending European Union embargo of Iranian oil set to take effect in July, are hitting Khamenei's core support base—the conservative merchant classes and, more importantly, the powerful Revolutionary Guards. Khamenei faces a critical choice in the months ahead: make a compromise to lessen tensions with the United States and the international community, or maintain a status quo that may set in motion the demise of his regime.

There are indications that the regime is ready for compromise. The quarrelsome and undiplomatic president, Mahmoud Ahmadinejad, has been effectively sidelined, at least for now. Rabidly conservative and anti-American officials have spoken positively of engagement with the P5+1. More importantly, Khamenei has reiterated his view that nuclear weapons are sinful and against his regime's religious principles.

Even if Khamenei's motivations are not entirely genuine, his public statement creates a red line, nuclear weaponization, that cannot be easily crossed in the future. Hence, Iran may be open to specific compromises, such as shipping out its stockpile of highly enriched uranium which can be used to assemble a nuclear weapon. Iran may also agree to cap enrichment at levels that cannot be easily used for weaponization. In return, the European Union can stop its embargo of Iranian oil. But Iran is unlikely to stop uranium enrichment completely, or agree to close its heavily fortified Fordo facility, as has been publicly demanded by Israel's top leadership. That could amount to total humiliation for Khamenei.

The immediate U.S. objective should be to dissuade Iran from weaponizing its program. Sanctions, Iran's growing isolation, and increasing popular discontent are helping the United States achieve this objective. There are indications that Iran's elite, especially within the Revolutionary Guards and even the clergy, is unhappy with Khamenei's leadership. This is not merely due to Khamenei's handling of the nuclear program and the resulting international sanctions; the regime's rot lies deeper.

But sanctions are magnifying the pressures on Khamenei. Many Guards officers have become fabulously wealthy from government contracts oiled by Iran's energy exports. They may appreciate Khamenei's largesse, but they will surely resent an economic crisis that imperils their wealth, and ultimately their political power. A compromise that could save face for Khamenei and the Guards, and prevent a military conflict, will not only be beneficial for the regime, but for the United States as well.

However, current sanctions, which should not be lifted, are also helping roll back Iran's regional influence and undermining the regime at home. The regime will have less money to support Bashar al-Assad's Syria and Hezbollah, and less money to prop up its authoritarian chokehold on Iranian politics.

The Baghdad talks may not provide an ultimate compromise. Any and every step of the engagement process with Iran may be disrupted by Khamenei's intransigence.

Regardless, the Iranian regime's miscalculation in pursuing a nuclear weapons capability may prove to be its undoing. United States and, importantly, Israeli flexibility during the negotiations—accepting limited Iranian enrichment of uranium in return for a cessation of the European oil embargo—may buy Iran some time. But it will also buy the United States time. The Iranian regime may keep its uranium enrichment program, but this will not be a victory as some Iranian leaders are claiming. Sanctions are helping prevent Iran from weaponizing its nuclear program while weakening Khamenei's regime at home and abroad. The Islamic Republic will not be able to escape the uprisings that have enveloped the Middle East indefinitely. Time, ultimately, is on the side of the United States, and not that of Khamenei's regime.

Alireza Nader, coauthor of Coping with a Nuclearizing Iran (RAND, 2011), is a senior policy analyst at the RAND Corporation, a nonprofit, nonpartisan research institution.

This op-ed originally appeared on www.foreignpolicy.com.

This commentary originally appeared on ForeignPolicy.com on May 22, 2012. Commentary gives RAND researchers a platform to convey insights based on their professional expertise and often on their peer-reviewed research and analysis.