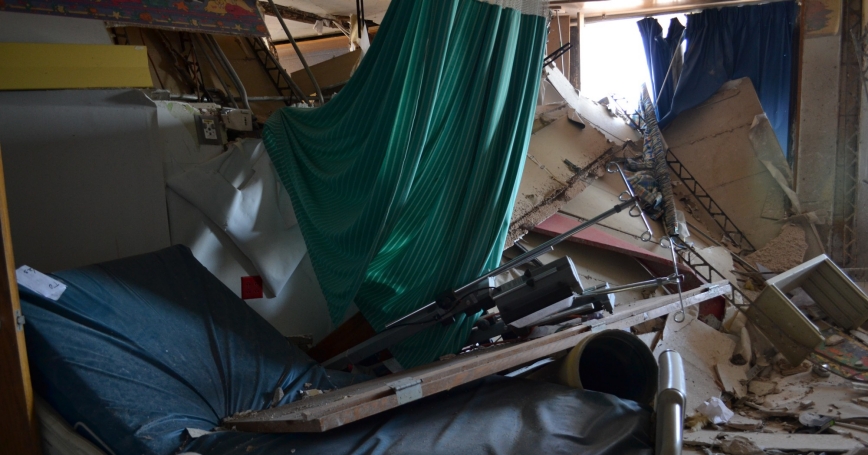 Damage sustained by St. John's Regional Medical Center in Joplin, Mo., after the May 22, 2011 EF-5 tornado

A year ago this week, a deadly tornado tore through Joplin, Mo., killing 161 people. The twister also heavily damaged St. John's Regional Medical Center, sucking up patient files and X-rays and depositing them up to 70 miles away. Fortunately, barely three weeks earlier, St. John's had switched from paper to electronic health records.

No one could have predicted the destruction ahead, or the benefits the electronic records would quickly provide. Even as the hospital's 183 patients were being evacuated, St. John's staff accessed and printed out their records from a remote site, and sent copies with patients to hospitals where they were transferred.

Within days, patient care resumed at a makeshift field hospital erected in what had been the St. John's parking lot. Accessing the computerized records also allowed St. John's-affiliated physicians whose clinics had been destroyed to resume care at new sites.

The Joplin experience is hardly unique. Across the country, electronic medical records, designed first and foremost to make health care delivery safer and more efficient, are proving valuable when disaster strikes. For example, the care of 38 patients evacuated from the Harrisburg, Ill., hospital when a tornado struck last February was eased because the electronic records of numerous patients were accessible.

The tragic consequences of not having a computerized record system were especially evident in 2005 after Hurricane Katrina, which destroyed many thousands of patient records in New Orleans and along the Gulf Coast. Physicians receiving evacuees were forced to provide treatment without a clear record of patients' medical history, allergies, medications or test results. In contrast, evacuated military veterans whose records were maintained through the Veterans Health Administration's ground-breaking VistA system were able to receive uninterrupted care at other VA medical centers throughout the country.

Health care facilities with electronic records are proving more resilient in the face of not only natural disasters but other unexpected dangers such as fires, because they are stored in large databases that are not located on site, so that they can be quickly reconstituted.

Concerns about the costs associated with the adoption of electronic records, and taking adequate measures to ensure patient confidentiality, are outweighed by improvements in access to care, patient and health care provider satisfaction and patient safety.

Although the USA has been slower than many other wealthy countries to adopt computerized records on a broad scale, we are catching up. A federal program aimed at encouraging physician practices, clinics and hospitals to make the switch has helped. The support for this program was bipartisan based on the belief that such records help provide better patient care and lower costs.

As electronic records have become more widespread, it is clear they are not only the key to improving 21st century health care, but that they also will improve disaster preparedness and foster community resilience.

At the same time, doctors' offices and hospitals can improve their capacity to deliver care, and at least one piece of their patients' lives — their health records — will be better protected and more readily available during times of crisis.

Mahshid Abir, M.D., is an adjunct behavioral and social scientist and Art Kellermann, M.D., is vice president and director of RAND Health, a division of the RAND Corporation, a non-profit, non-partisan research organization.

This commentary originally appeared in USA Today on May 23, 2012. Commentary gives RAND researchers a platform to convey insights based on their professional expertise and often on their peer-reviewed research and analysis.