(NYTimes.com on May 16, 2012 and in International Herald Tribune) 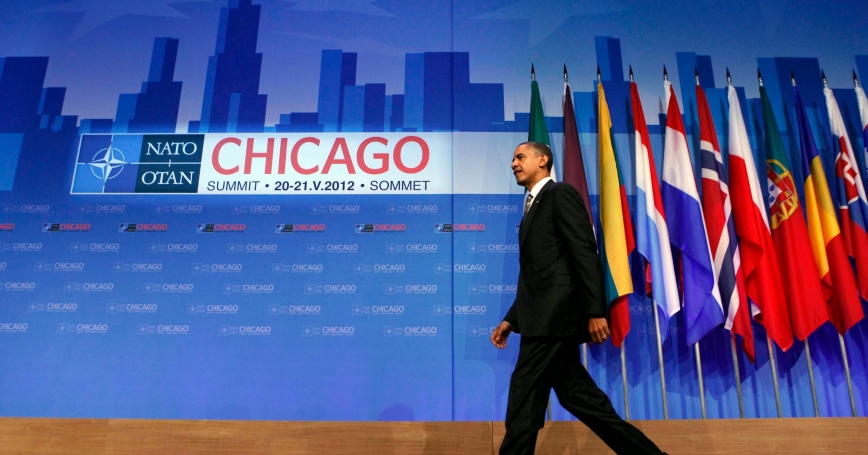 U.S. President Barack Obama walks out before he holds a news conference after the 2012 NATO Summit in Chicago at McCormick Place in Chicago, May 21, 2012

The upcoming NATO summit meeting in Chicago on May 20–21 is being billed as a historic event that will enable the alliance to achieve consensus on several important security issues, particularly military capabilities, missile defense and Afghanistan. But a dodgy European economy and the change of government in France could severely complicate prospects.

The most serious obstacle is the severe economic constraints on defense resources. The global economic crisis has forced European governments to sharply cut their defense budgets. Germany plans to reduce defense spending by a quarter over the next four years. Britain's defense budget will be slashed by 7.5 percent until 2015. The defense budgets of some smaller European nations have taken even larger cuts.

These cuts come after several decades of decline in defense spending by the European members of NATO. As these allies have become more affluent, their readiness to appropriate funds for defense has declined markedly.

Since the end of the Cold War, defense spending by European members has declined by 20 percent.

The Libyan crisis underscored the dangers of such underspending. While the European members of NATO contributed more militarily to the Libyan campaign than they did in the Balkan crisis in the 1990s, many missions could not be carried out or sustained without significant U.S. military assistance.

Without U.S. Tomahawk cruise missiles, drones and electronic warfare aircraft to guide combat missions, the Libya intervention could not have succeeded.

The United States provided 75 percent of intelligence, surveillance and reconnaissance data employed to protect Libyan citizens and enforce the arms embargo, as well as 75 percent of the refueling planes used in the intervention.

In the future, the European allies need to give priority to acquiring capabilities such as precision-guided munitions (PGMs), surveillance and refueling aircraft, as well as unmanned aerial vehicles (UAVs). However, the planned European reductions in defense spending raise serious questions about whether funds will be available for investment in these capabilities.

France has a new president, and François Hollande is likely to want more time to study the missile defense issue before signing on to such an important commitment. This could throw a spanner in the Obama administration's game plan for moving forward with its missile defense agenda.

Afghanistan may also prove contentious. Hollande has called for French troops to be withdrawn from Afghanistan by the end of 2012 — two years sooner than the Obama administration's plan. His lack of enthusiasm for the Afghan mission is shared by many European leaders. Thus getting the European allies to sign on to continued engagement in Afghanistan beyond 2014 is likely to prove difficult.

To a large extent, Europe's economic future depends on which way France moves in the debate on how to manage the continent's economic crisis — and whether Hollande can get German support for the French position with its emphasis on growth rather than simply austerity measures.

At a time when the European Union faces mounting economic and political challenges, maintaining a strong, vibrant Atlantic alliance is more important than ever.

With this in mind, U.S. officials should give Hollande time to digest many of the complex issues the alliance faces. This may mean that some issues, particularly missile defense, may not be completely resolved in Chicago.

However, such an outcome is preferable to getting into a fractious spat with the new French government at a time when French cooperation will be crucial in managing Europe's growing economic and political challenges as well as sustaining the military capacity of a viable Atlantic alliance.

F. Stephen Larrabee holds the Distinguished Chair in European Security and Peter A. Wilson is a senior adjunct international security analyst at the RAND Corporation, a nonprofit, nonpartisan research institution.

This commentary originally appeared on NYTimes.com on May 16, 2012 and in International Herald Tribune on May 17, 2012. Commentary gives RAND researchers a platform to convey insights based on their professional expertise and often on their peer-reviewed research and analysis.