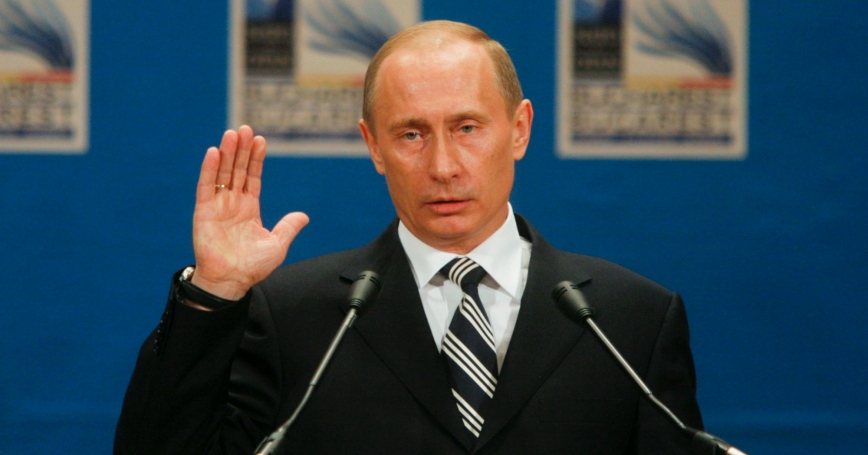 Russian President Vladimir Putin speaks during his news conference at the NATO summit in Bucharest April 4, 2008

The decision by Russian President Vladimir Putin not to attend the NATO summit and the G-8 summit is a blow to the Obama administration's hopes of building closer ties to Russia and underscores that the effort to "reset" relations with Russia is likely to be slow and fraught with difficulties.

Putin's excuse — that he was too busy with the formation of the new Cabinet — is hardly credible. Prime Minister Dmitri Medvedev has the responsibility to nominate the Cabinet, not Putin. But Medvedev will be in the United States attending the G-8 summit. So the prime minister, who is in charge of forming the Cabinet, can go to the summit. But Putin, who does not have the main responsibility in this matter, cannot.

Putin presumably intends to send two important messages through his absences. First, to underscore that Putin is the Voshd — Numero Uno — even in matters that constitutionally fall to the prime minister. This is hardly news. It was clear when Putin was prime minister that he was the real power behind the throne. Now that he is again president, Putin was just making it clear, lest anyone wondered.

The second — and more important — message was that Putin was not ready to fly off to the United States simply for a photo-op and handshake with President Barack Obama. There had to be substantive progress on reducing areas of disagreement on key issues, particularly on missile defense. He was not prepared to come to Chicago to be a bit actor in a play endorsing NATO's missile defense plans. This was a task for Medvedev, who would be associated with decisions that were not seen to have benefits for Russia.

This does not mean that under Putin, relations with Russia are likely to revert back to the Cold War. Putin would like better relations with Washington — on his terms. The Putin camp believes Russia received few benefits from the Obama administration's reset policy. They want a more "balanced" relationship — one that takes into consideration more forcefully Russian interests. They believe Medvedev as president was not tough enough with the Obama administration. They want a more equal relationship.

At the same time, the internal situation in Russia makes a reset with Moscow more difficult. For one thing, the economic situation in Russia is far less advantageous now than it was during Putin's first two terms, when a dramatic rise in oil prices allowed Russia to recover more quickly than many Western observers had anticipated.

In addition, Putin faces a much more restive and assertive Russian middle class than in his first two terms. While some of the energy that fueled the protests before Putin's election in March has fizzled, the rallies continue to draw large crowds, and discontent with Putin's rule remains strong among the urban middle class.

The continued protests and calls for greater internal reform ensure that democracy and human rights issues will be important items on the U.S.-Russian political agenda in a way they were not in Putin's earlier tenure as president. This is likely to complicate the U.S.-Russian dialogue and make resolution of other issues, particularly missile defense, more difficult.

Putin's decision to withdraw from the G-8 meeting, for instance, appears in part to have reflected irritation over the Obama administration's statements about the protests during Putin's inauguration.

Another sore point has been pending legislation in Congress that seeks to punish Russian officials linked to human rights abuses. This has complicated the administration's efforts to repeal the Jackson-Vanik amendment, passed during the Cold War, which imposed sanctions on Moscow because of its restrictions on emigration of Jews. Since the collapse of the Soviet Union, successive American administrations have waived the sanctions. But Moscow feels that the Obama administration has not been assertive enough in pressing for the abolition of the legislation.

Putin also has been irked by what he perceives as efforts by the administration to undermine his political authority. In December, he publicly accused Secretary of State Hillary Rodham Clinton of promoting "regime change" in Russia. The Russian press has also sharply attacked Michael McFaul, the U.S. ambassador in Moscow, viewed as one of the main architects of the administration's policy aimed at democracy promotion.

These attacks underscore the way in which internal and external policy have become more closely fused of late. Until these issues are sorted out, the prospects for a serious improvement in U.S.-Russian relations will remain dim.

F. Stephen Larrabee, who holds the distinguished chair in European security at the nonprofit RAND Corp., served on the National Security Council staff in the Carter White House.

This commentary originally appeared in Chicago Tribune on May 17, 2012. Commentary gives RAND researchers a platform to convey insights based on their professional expertise and often on their peer-reviewed research and analysis.