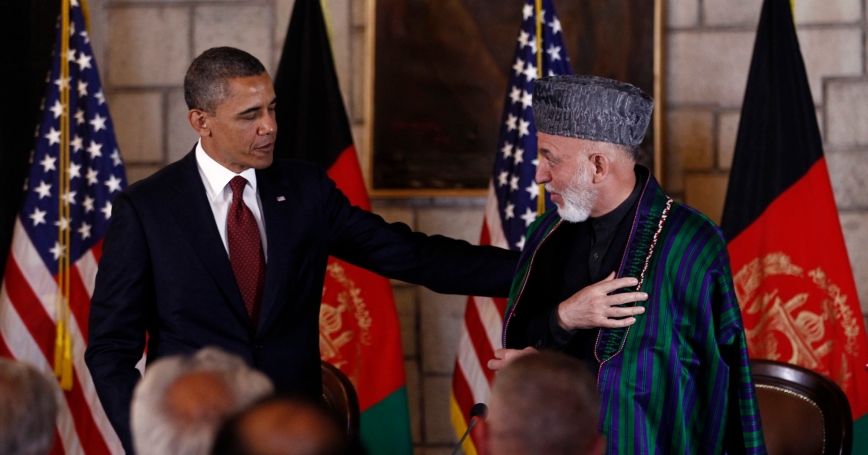 U.S. President Barack Obama puts his arm on Afghan President Hamid Karzai after they signed the Strategic Partnership Agreement in Kabul, May 2, 2012

by Douglas A. Ollivant and Radha Iyengar Plumb

Americans are fooling themselves if they think the era of adventures abroad is over. In fact, another big international intervention is just around the corner. And we're not nearly ready for it.

U.S. President Barack Obama's recent speech during his surprise visit to Afghanistan on May 1 said it all: "Our goal is not to build a country in America's image or to eradicate every vestige of the Taliban. These objectives would require many more years, many more dollars, and most importantly, many more American lives." This extraordinary statement is one that those involved in U.S. foreign policy have heard many times before: The era of big interventions is over. It's a tried-and-true narrative, and today, the argument goes something like this: The combination of significant war fatigue and coming defense cuts makes it unlikely that the United States will muster the political will or economic resources to sustain another large-scale military effort. The invasion, occupation, and reconstruction of Iraq and Afghanistan will almost certainly be seen as aberrations permitted by the post-9/11 environment, or so the thinking goes.

The conventional wisdom has it wrong. It is, in fact, likely that in the next decade, the United States will once again launch a military intervention, though with a smaller footprint than in years past. The threat from terrorist camps in weak, failed, or rogue states such as Yemen; the danger of civil wars or internecine conflicts that threaten stability in countries such as Sudan and South Sudan, and humanitarian crises that could cost tens of thousands of lives in places such as Syria and Somalia will not allow the option of intervention to be taken off the table. But the full-scale military engagements of the 2000s—akin to Iraq and Afghanistan—will not be policymakers' preferred mechanism for conducting such operations....

This commentary originally appeared in Foreign Policy on May 3, 2012. Commentary gives RAND researchers a platform to convey insights based on their professional expertise and often on their peer-reviewed research and analysis.