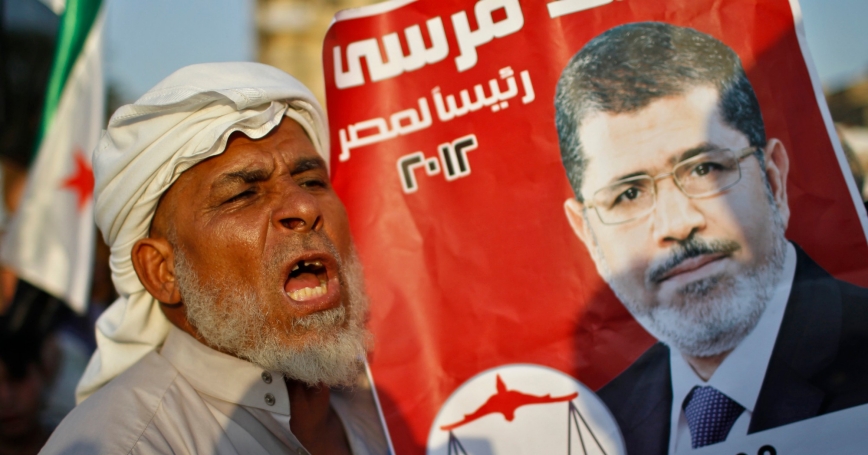 A supporter of Muslim Brotherhood's presidential candidate Morsi during a rally at Tahrir Square in Cairo June 22, 2012

Earlier this year, the Muslim Brotherhood announced that it was reneging on its promise not to field a candidate in the 2012 presidential election, held this week, arguing that it had been forced to seek executive power. The Brotherhood said that the parliament, in which it won a plurality of seats in early 2012, had no real authority. Even after the parliamentarians were seated, the military-led Supreme Council of the Armed Forces (SCAF) retained the power to nominate the cabinet, and the generals continually intervened in the process of constitution drafting. There was something to Brotherhood's point: days before the presidential election, Egypt's highest court, headed by an appointee from the era of former President Hosni Mubarak, dissolved the legislature.

With the parliament losing power by the day, the presidency looked like a last refuge for the Brotherhood. And its candidate, Muhammad Mursi, appears to have won in a closely fought race. If the initial results hold up—at the time of this writing, the Electoral Commission is still reviewing the more than 400 appeals filed by the two campaigns—the victory will be in name only. Despite gaining executive authority in principle, Mursi will have little power in practice. After months of subtler maneuvering, the military did away with the charade of a democratic transition in a series of power grabs that bookended the presidential vote. The first salvo was the re-imposition of martial law on June 13. Then, just as the polls were closing on June 17, the generals issued a supplemental constitutional declaration that granted them legislative authority and reinforced their role in the drafting of a permanent constitution. Not to be reined in, the brass also exempted itself from civilian oversight, giving itself the right to appoint and promote its own leadership, manage its own economic projects, and conclude arms deals. Finally, on June 18, Field Marshal Mohammed Hussein Tantawi announced the reestablishment of a national defense council, which puts the generals firmly in charge of Egypt's national security policy.

The Brotherhood now faces a choice. It can seat Mursi and continue to legitimate a post-Mubarak transition that seems designed to advance the narrow interests of Egypt's officer corps. Or it can return to the streets with the aim of unseating the military council.

Neither option offers the Brotherhood much benefit. Should Mursi take the oath of office as planned, it is unclear what authority he would actually have. The Egyptian military has already said that there will be no new parliamentary elections until a permanent constitution is drafted. The generals refuse to commit to a firm timeline, saying only that they hope to have a new constitution within four and a half months and a new parliament seated before the end of 2012. Operating in the absence of a permanent constitution and without a legislature, Mursi would have no authority to carry out the program of Islamic "renaissance" on which he ran, nor would he have any institutional allies. The ruling generals and the judiciary have shown no interest in Islamist-led change.

Moreover, should Mursi take up his position as the nominal president he will be exposing the Brotherhood to the familiar critique of intihaziya (opportunism. Many Egyptians already believe that the Brotherhood is happy to accommodate a military state when it means self-preservation, or when it gives them the opportunity to sideline their ideological competitors. In fact, this was the group's pattern in the early 1950s and again during the 1970s, when the Brotherhood allowed itself to be used by the government as a tool to balance the secular left. The inclination toward intihaziya was visible in the run-up to the 2011-12 parliamentary elections, too. As the revolutionary groups battled security forces outside the Interior Ministry on the eve of the vote, the Brotherhood urged restraint. The fact that it then won a plurality reinforced the feeling that the group puts its political fortunes ahead of its principles.

On the other hand, should Mursi foreswear his post as the first freely elected president of Egypt after Mubarak, and the Brotherhood return to the streets, they may find that the moment for demonstrations has already passed. Sixteen long months after Mubarak was ousted, the star of the revolutionary youth has fallen considerably. Ordinary Egyptians appear weary of further unrest. Evidence of their exhaustion: only half of eligible voters turned out for the presidential runoff election, down considerably from the parliamentary elections. And around 48 percent of those who did show up voted for the stability candidate, Ahmed Shafiq, who did not bother to hide his connections to the previous regime. Egypt's dismal economy exacerbates the fatigue; real per capita GDP contracted throughout 2011, and everyday Egyptians are feeling the pinch...

Jeff Martini is a project associate at the RAND Corporation. He recently returned from assignment in Egypt.

This commentary originally appeared on Foreign Affairs on June 21, 2012. Commentary gives RAND researchers a platform to convey insights based on their professional expertise and often on their peer-reviewed research and analysis.