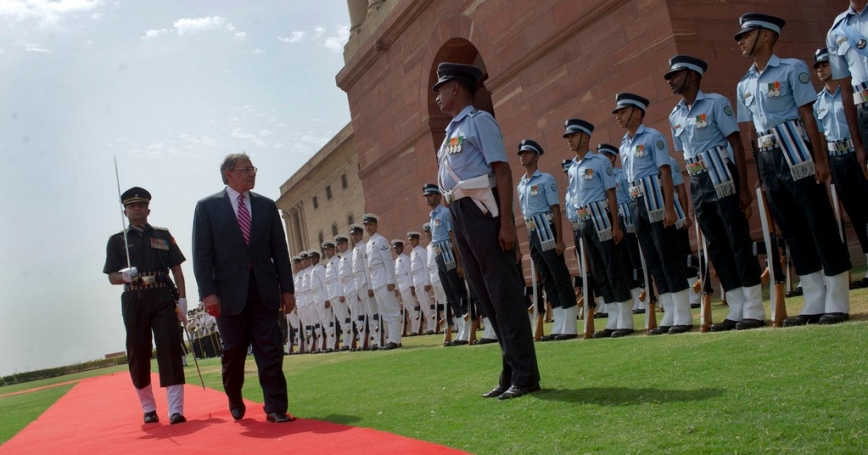 Secretary of Defense Leon E. Panetta passes members of the Indian military during an honors ceremony in Delhi, India, June 2012

Photo by Erin A. Kirk-Cuomo/DoD

by Larry Hanauer and Peter Chalk

Last week Pakistan's new spy chief Lieutenant General Zahir ul-Islam made an inaugural trip to the United States and met with his counterparts in the American intelligence community. Although little is known about was discussed, Islamabad's ongoing support of groups attacking U.S. and NATO forces — particularly the Haqqani Network — was almost certainly high on the agenda. Pakistan's backing of these entities, which has severely strained relations with Washington, is one of the main reasons why the Obama Administration has moved closer to Pakistan's arch-rival India, soliciting it to increase military engagement with Kabul.

General Zahir's visit could be read as a potential sign that American-Pakistani ties may be on the mend. Nonetheless, as we contend in our recent report, India's and Pakistan's Strategies in Afghanistan: Implications for the United States and the Region (RAND, 2012), the United States should continue to encourage Delhi to play more robust economic, commercial and military roles in Afghanistan. Not only is India a more reliable partner than Pakistan, but it has far more to contribute to stability and security in Afghanistan and in the wider regions of South and Central Asia.

The United States had previously urged India to refrain from providing military assistance to the Karzai government in order to avoid antagonizing Pakistan, which was seen as critical in helping to prosecute the war against the Taliban and countering al-Qaeda and its affiliates. However, in many respects this thinking has proved unfounded. Insurgents tied to Islamabad's Inter-Services Intelligence (ISI) Directorate have repeatedly attacked coalition forces in Afghanistan and even assaulted the U.S. Embassy in Kabul last September. Pakistan has repeatedly undercut Washington's efforts to negotiate a political settlement with the Taliban — which is seen as critical to securing the eventual withdrawal of American combat troops after 2014 — by detaining and, many believe, assassinating insurgent leaders that are inclined to compromise. Pakistan has also refused to investigate how Osama Bin Laden managed to hide in the country for so many years without being detected and earlier this year sentenced a local doctor to 33 years in prison for helping American forces locate him.

In reaction to this obstructionism, and as alternatives to Pakistani assistance have become increasingly viable, the U.S. has become less hesitant to offend Islamabad despite the risk of Pakistani retaliation. Washington has, for example, continued drone strikes on al-Qaeda targets based in the Federally Administered Tribal Areas (FATA), despite fervent Pakistani opposition. After the U.S. refused to apologize for attacking a Pakistani border post in November 2011 that was believed to be the source of incoming fire, Islamabad closed its borders to NATO supplies headed for Afghanistan. Washington adjusted by firming up agreements with Central Asian states to move supplies though their territory instead. When Pakistan offered to reopen the borders in return for transit fees 20 times the amount previously paid, the United States chose to continue using the more costly alternate routes, with U.S. Secretary of Defense Leon Panetta pointedly stating that he would not allow Pakistan to "gouge" the United States on price. Ultimately, after Secretary of State Hillary Clinton issued a carefully worded apology, Pakistan agreed on July 3 to reopen the border without imposing any fees.

Growing frustration with Pakistan has also freed Washington to solicit more active Indian participation in shaping Afghanistan's political and economic future. For years, New Delhi has made significant, albeit low-profile contributions to Afghan development through reconstruction assistance and private investment projects. The U.S. has recognized the potential benefit of these contributions and has called for India to serve as the cornerstone of a "New Silk Road" initiative aimed at moderating support for violent extremism by improving Afghanistan's economy and expanding regional trade.

More significant, however, was Secretary Panetta's proposal during a visit to New Delhi in June that India should continue training Afghanistan's nascent armed forces. Until now, Washington has urged New Delhi to avoid directly injecting itself into Afghan security affairs lest it provoke a hostile Pakistani reaction.

India opened the door to security cooperation in October 2011, when it agreed to provide light weapons as well as counter-insurgency (COIN) and high-altitude warfare training to the Afghan army, police and air force. This type of assistance could play a vital role in helping to fill the vacuum left by the planned reduction in U.S. and NATO forces in 2014, which explains why Washington is so eager to encourage Indian engagement in Kabul's security sector.

Without question, there are significant risks to Washington's tilt toward India. Even with Delhi's help, it would be difficult to stabilize Afghanistan in the face of Pakistani opposition. Islamabad could bring a virtual halt to political reconciliation efforts; fuel violence in Afghanistan by expanding support to the Taliban and granting even freer rein to insurgents operating out of Waziristan; permit al-Qaeda to use the FATA as a sanctuary for plotting anti-Western terror attacks; or unleash proxy groups such as Lashkar-e-Taiba to conduct strikes on Indian territory along the lines of the November 2008 Mumbai assault.

Even if relations between the U.S. and Pakistan improve, Islamabad is more likely to respond antagonistically to Washington's Indian outreach than to suddenly transform itself into a committed partner. The Pakistani Army has long viewed Afghan territory as critical to its own national security — both in terms of providing "strategic depth" in the event of an Indian invasion, and, more intrinsically, as a deniable base in which to train jihadi proxies to further its power and influence in South Asia.

U.S. officials should continue to press their Indian counterparts to take an active role in developing Afghanistan's security forces. A comprehensive Indian military training effort in Afghanistan would balance Pakistan's own involvement in the country, build upon a decade of American achievements in fighting the Taliban and al-Qaeda, and contribute to peace and security in the region.

Larry Hanauer and Peter Chalk, co-authors of India's and Pakistan's Strategies in Afghanistan: Implications for the United States and the Region (RAND, 2012), are senior international policy analysts at the RAND Corporation, a nonprofit, nonpartisan research institution.

This commentary originally appeared on The Diplomat on August 10, 2012. Commentary gives RAND researchers a platform to convey insights based on their professional expertise and often on their peer-reviewed research and analysis.