Conflict with China: What It Would Look Like, How to Avoid It 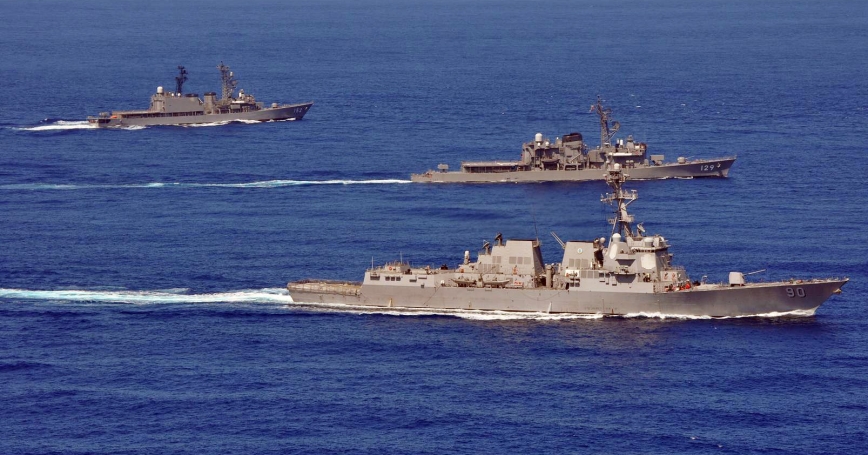 Formation drills during a passing exercise in the South China Sea

Since the disappearance of the Soviet Union, China has become America's default adversary, the power against which the United States measures itself militarily, at least when there is no more proximate enemy in sight. With America's war in Iraq over and the one in Afghanistan winding down, President Obama has announced yet another American pivot to Asia, with China as the main preoccupation. This raises the question of how likely conflict with China is, what it would look like, and how it can be avoided.

Over the next 20 years, China's GDP and defense budget could grow to exceed those of the U.S., allowing it to become a true peer competitor. Despite this potential, China's security interests and military capabilities will likely remain focused on its immediate periphery. Possible conflicts might arise there involving Korea, Taiwan, one or more countries of Southeast Asia, or India, more or less in that descending order of probability. A U.S.-China conflict might also start in—and perhaps be entirely confined to—cyber-space. Armed conflict between the United States and China is not probable in any of these instances, but that judgment is based on an assessment that the United States will retain the capacity to deter the type of behavior that would lead to such a clash.

While China's overall military capabilities will not equal those of the United States anytime soon, it will more quickly achieve local superiority in its immediate neighborhood, first in and around Taiwan and then at somewhat greater distances. In consequence, the direct defense of contested assets in that region will become progressively more difficult, eventually approaching impossible. The United States will therefore become increasingly dependent on escalatory options for defense and retaliatory capabilities for deterrence. American nuclear superiority is not likely to be much help in this regard, both because China will retain a second-strike capability and because the issues at stake in most potential crises are not of vital consequence to the United States. Conflict is likely to escalate into the cyber and economic realms. In both cases, U.S. vulnerabilities are such as to make this unattractively costly. Conventional strikes on mainland Chinese military targets may be the best escalatory option, but there is little reason to be confident that conflict could be so confined.

One means of improving the prospects for direct defense and reducing the risk of escalation is for the United States to enable the capabilities and buttress the resolve of China's neighbors. Such a strategy should not be—or be seen—as a U.S. attempt to encircle or align the region against China, lest it produce greater Chinese hostility. Indeed, a parallel effort should be made to draw China into cooperative security endeavors, not only to avoid the appearance of an anti-China coalition but also to obtain greater contributions to international security from the world's second-strongest power.

The economic consequences of a Sino-American conflict could be historically unparalleled, even if both sides avoid economic warfare. This is a powerful mutual deterrent, one marginally in the American favor at present. Strengthening the U.S. economy is the best way of ensuring that the balance of interdependence and of the associated deterrence does not shift dangerously against the United States over the next several decades.

While the risk of conflict with China cannot be ignored, neither should it be exaggerated. Any numbers of other conflicts are more likely. These more likely conflicts will be with opponents quite different from China and will call for capabilities quite dissimilar from those required to deal with a real peer competitor. Individually, these contingencies will be less consequential than a conflict with China, but collectively they will shape the international environment in which both countries interact and fundamentally influence Chinese perceptions of U.S. power and determination.

James Dobbins directs the International Security and Defense Policy Center at the nonprofit, nonpartisan RAND Corporation. This article is adapted from the RAND study “Conflict with China: Prospects, Consequences and Strategies for Deterrence” by James Dobbins, David C. Gompert, David A. Shlapak and Andrew Scobell.

This commentary originally appeared on The Diplomat on August 14, 2012. Commentary gives RAND researchers a platform to convey insights based on their professional expertise and often on their peer-reviewed research and analysis.