How Does Arab Spring Compare to Third Wave Transitions? 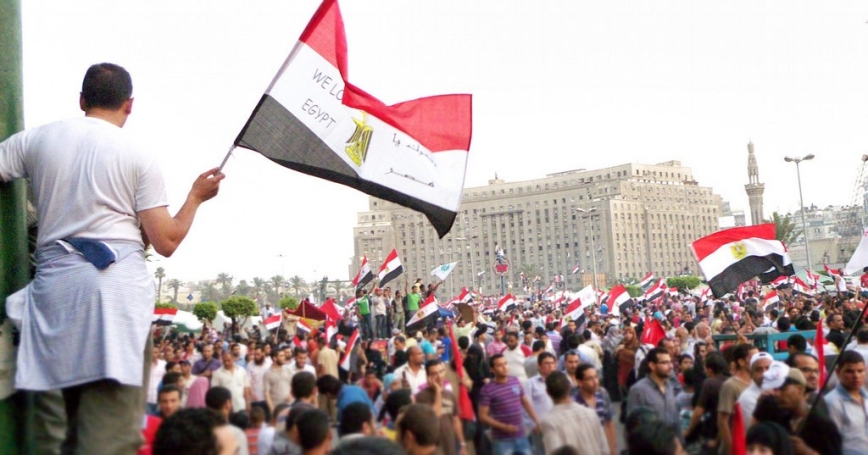 The utterly unexpected Arab Spring has catalyzed a political sea change, but it has so far spawned more protest movements than regime changes, notes a major new study. Will the Arab Spring lead to a flowering of democracy? Will loosening political systems unleash dangerous forces of extremism or ethno-sectarian conflict? Will new autocrats replace the old ones? Will surviving autocrats harden their positions or see the need for gradual change?

Such questions and daunting challenges lay ahead, according to Laurel Miller and Jeffrey Martini, the lead authors of RAND's Democratization in the Arab World: Prospects and Lessons From Around the Globe, who assess the Third Wave of transitions in search of pragmatic, policy-relevant conclusions.

The notion of a "transition paradigm," in which countries move from authoritarian rule toward democracy through a sequence of stages, has been largely rejected. Many countries have been seen to settle into a "gray zone" of diverse forms of government where autocratic and democratic features are combined. Consequently, the changes underway in the Arab world may lead to various possible destinations that differ both from their points of departure and from liberal democracy.

This study considers how past experience speaks to the processes now unfolding in the Arab world, focusing on those factors likely to be pertinent in the context of the Arab world.

The influences we considered include both structural conditions and policy choices. They are: (1) the mode of regime change, with attention given to how the way in which power changed hands affected the democratization process; (2) the country's past experience with political pluralism; (3) critical policy choices made by the domestic actors during the transition process, including decisions made regarding subordination of militaries to civilian control, elections, constitution making, and transitional justice (holding former regime members to account for abuses); (4) state and social cohesion, including social cleavages, insurgencies, and unsettled borders; (5) economic characteristics; (6) the external environment; and (7) external policy choices and assistance, including efforts by foreign actors to foster democratization.

Past Experiences Throughout the World

The third wave commenced with democratic transitions in Southern Europe in the mid-1970s. Regime changes in Latin America were set in motion in the 1980s and continued into the 1990s. Next came the stunning transformation of Central and Eastern Europe and dissolution of the Soviet Union beginning in 1989. Democratic transitions swept through sub-Saharan Africa in the early to mid-1990s (though many were not sustained), and occurred more sporadically in various parts of Asia in the 1980s through 2000s. We examined the democratization trends in each of these regions and focused in-depth on particular examples of transitions in each region.

In Southern Europe, the nearly contemporaneous regime changes in Portugal, Greece, and Spain produced consolidated democracies relatively quickly, while in Turkey progress was more halting. In the Portuguese, Greek, and Spanish cases and, to a lesser extent, later in Turkey, the pull of European integration was an especially important factor propelling democratization.

Latin America saw cyclical patterns of authoritarianism and democratization in the post-independence period. The democratization cycle that unfolded in the 1980s and 1990s reflected strong continent-wide trends toward democratic governance, the free market, and trade liberalization. These trends reinforced each other, strengthened the role of civil society and elected officials, and, in some countries, particularly in the Southern Cone, transformed the political role of the military.

The transitions in Eastern Europe and the Post-Soviet Space resulted in disparate outcomes. For much of the Post-Soviet Space, especially the Central Asian states, the problems associated with the legacy of Soviet rule weighed heavily against democratization. For the countries of Eastern Europe, the prospect of membership in the European Union (EU) and North Atlantic Treaty Organization (NATO) was crucial to the speed, comprehensiveness, and success of the transition processes.

One important explanation for differences among the Eastern European transitions is the degree of the former regimes' penetration of society. The regimes that maintained the tightest control and used the harshest methods to repress dissent, such as Romania and Bulgaria, had the most difficult transitions. Few, if any, autonomous groups had been allowed to emerge that could help to broker the transitions. Thus, the transitions in Romania and Bulgaria were chaotic and slower than those in countries such as Hungary and Poland, where civil society had begun to emerge prior to the transition.

Weak civil society has also been an important factor limiting democratization in Central Asia and parts of the European post-Soviet Space. Lack of strong national identities and the emergence of violent ethnic conflicts and separatist pressures were key factors as well.

In Asia, many countries, including North Korea, Laos, Vietnam, and China, have never embarked on a democratic course and remain under varying degrees of authoritarian rule. Many others have hybrid regimes. In recent years, though, Freedom House has recorded impressive gains in adoption of institutions of electoral democracy in the region. Among the countries that have experienced democratic transitions, the history, patterns, and durability of the transitions are especially diverse.

Sub-Saharan Africa experienced an unprecedented and fast-moving series of democratic transitions in 1990—1994. Although a few transitions happened earlier, some durable and some short-lived, they represented little more than exceptions on a continent where the typical regime was authoritarian, relied on single-party rule, and kept civil liberties under tight control.

Importantly for transitional states in the Arab world, however, sub-Saharan Africa's experience also shows that democratic consolidation can be elusive. Democratization in unfavorable circumstances is a slow process, with many ongoing challenges.

A fundamental historical shift in recent decades is that democracy no longer has any serious competitors as a legitimate system of governance. Particularly after the dissolution of the Soviet Union and the rejection of communism as a form of government across Europe, governments in all countries transitioning from authoritarianism espouse democracy, even though many fall short in practice. No governments, even those that purposefully bolster autocrats beyond their borders, now openly propose any transplantable alternative to democracy. Institutions in the international system promote democracy as a universal norm.

An important question about the consequences of the Arab Spring is whether the Arab world will adapt to this reality or change it. A distinct feature of Arab political culture is that some propose an alternative to democracy: Islamism. Uncertain as yet is what difference this distinction will make to the outcomes of transitions in the region. Developments in Egypt, Tunisia, Libya, and potentially elsewhere will test the ability of parties that champion an Islamist agenda to pursue political and social aims within a democratic system alongside parties with a secular orientation. They will also test the ability of transitional leaders to manage the cleavage between Islamist and secular conceptions of the state.

Arab countries may follow paths similar to those taken by Turkey and Indonesia, where socially conservative Muslim parties play active roles in electoral politics within democratic systems. They could experience something like Iraq's fractious identity-based politics, where sectarian affiliation plays a strong role but where the prospect of an Islamist system is dim. The turn away from authoritarianism could, however, open up space for groups to promote Islamist forms of government. The parameters of political Islam in Arab countries undergoing political change have yet to be defined.

Popular expectations and continued pressure will be more important to the outcomes of the Arab Spring than in some previous transitions. Already in Egypt, for example, protesters have seen a need to continue pressing the military to maintain momentum toward democracy. Transitions in Southern Europe, Latin America, and Eastern Europe were generally sustained by elite consensus, developed before the transition's opening or in its early stages, with less need for populations to hold their leaders' feet to the fire. As a result of the important role of mass protest in initiating the Arab Spring transitions and, in all likelihood, pushing the processes forward, some of these transitions, especially in Tunisia, might move more quickly than those that were initiated from above, as in Latin America. But, in the absence of elite and intergroup consensus, the transitions in Egypt, Libya, and, if a transition opens there, Syria could remain contested for protracted periods of time.

Arab regimes are more diverse than regimes in Eastern Europe were, including with respect to their internal and external support structures. Regimes in Syria and Yemen, for example, have mixed personalist and single-party rule and have been supported, especially in Syria's case, by a strong internal security architecture. In Bahrain, Saudi Arabia (the Gulf area's main power) supports the monarchy out of shared interest in preventing democratic reform. In other words, the Arab Spring has generated pressure for political change, but counterpressures in the region remain strong.

That said, diffusion effects do not have to be manifested in spectacular and speedy political change. In Latin America, the entrenchment of democratic norms and practices took place over a longer period of time than in Eastern or Southern Europe.

A cautionary lesson can be drawn from the wave of political transitions that in the early to mid-1990s swept through sub-Saharan Africa, a region with nearly as little prior democratic experience as the Arab world. Though overall less tumultuous than the revolutions of the Arab Spring, these transitions occurred relatively quickly and many involved public protests. After the initial swell of change, many of these transitions failed to deliver enduring democratization. Fundamental restructuring of political processes and institutions, including through constitutional reform, was crucial in the more successful cases. Where such restructuring did not occur, newly elected regimes often practiced old forms of repression or manipulated democratic formalities to their benefit.

Laurel Miller is a senior policy analyst and Jeffrey Martini is a Middle East analyst at the RAND Corporation, a nonprofit, nonpartisan research institution. They are the lead authors of the just-published "Democratization in the Arab World: Prospects and Lessons from Around the Globe" (RAND, 2012). Co-authors were F. Stephen Larrabee, Angel Rabasa, Stephanie Pezard, Julie E. Taylor and Tewodaj Mengistu.

This commentary originally appeared on Democracy Digest on July 18, 2012. Commentary gives RAND researchers a platform to convey insights based on their professional expertise and often on their peer-reviewed research and analysis.