'Socialized' or Not, We Can Learn from the VA 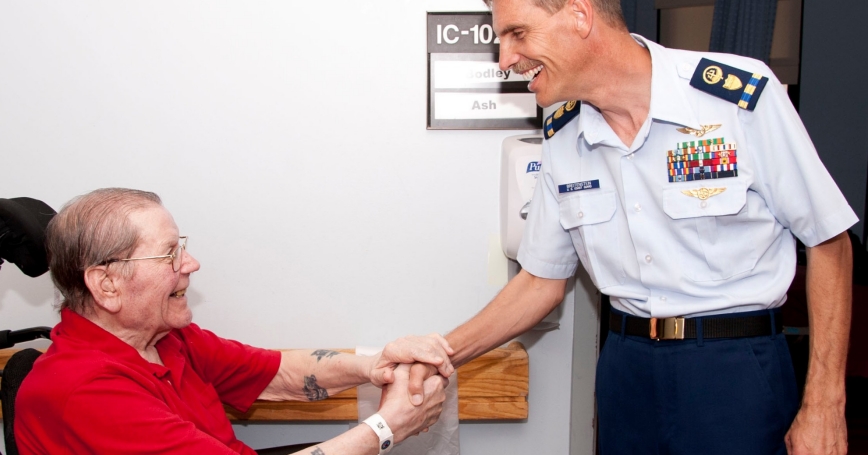 In a recent post on the New York Times' Economix blog, Princeton economics professor Uwe E. Reinhardt addresses the common characterization of the British health care system as "socialized medicine." The label is most often used pejoratively in the United States to suggest that if anything resembling Great Britain's National Health System (NHS) were adopted in the U.S., it would invariably deliver low-quality health care and produce poor health outcomes.

Ironically, Reinhardt notes, the U.S. already has a close cousin to the NHS within our borders. It's the national network of VA Hospitals, clinics and skilled nursing facilities operated by our Veterans Healthcare Administration, part of the Department of Veterans Affairs. By almost every measure, the VA is recognized as delivering consistently high-quality care to its patients.

Among the evidence Reinhardt cites is an "eye-opening" (his words) 2004 RAND study from in the Annals of Internal Medicine that examined the quality of VA care, comparing the medical records of VA patients with a national sample and evaluating how effectively health care is delivered to each group (see a summary of that study).

RAND's study, led by Dr. Steven Asch, found that the VA system delivered higher-quality care than the national sample of private hospitals on all measures except acute care (on which the two samples performed comparably). In nearly every other respect, VA patients received consistently better care across the board, including screening, diagnosis, treatment, and access to follow-up.

Other studies have generated similar findings. In 2010, an interdisciplinary team of researchers published a systematic review of prior research that compared the quality of surgical care provided by the VA with that provided by relevant non-VA hospitals and healthcare systems. Based on the available evidence, the authors determined that VA and non-VA settings generally provided comparable surgical care and achieved similar outcomes. What differences the team did find favored VA care in 3 instances and non-VA care in 5. In 15 comparisons, care was not different.

The following year, this team published a second systematic review, this time focusing on how well VA and non-VA facilities deliver medical and non-surgical care. After examining 36 high-quality studies, the team concluded that the VA almost always came out on top when the study examined how well health systems follow recommended processes of care. When the study compared mortality rates, VA and non-VA facilities generally achieved similar outcomes.

Earlier this year, a team of RAND and Altarum Institute researchers published the results of a major, national evaluation of the quality of mental health and substance use care provided by the VA. Many of these patients not only struggle with complex mental health and substance use disorders, but serious physical problems as well. As a result, they are extremely difficult and expensive to treat.

In their report, the RAND-Altarum team noted that although the VA has not yet reached the high standards it has set for itself, between 2007 and 2009 quality improved significantly despite substantial growth in the number of veterans served. In fact, the team determined that the VA already has higher levels of performance than private providers for seven out of nine indicators, and VA patients endorse similar levels of satisfaction with VA care as patients in the private sector. A summary of the team's findings was recently published in the journal Health Affairs.

"Government health care" is often characterized as wasteful and inefficient. But here too the VA's experience suggests otherwise. In 2007, the nonpartisan Congressional Budget Office (CBO) released a report (PDF) that concluded that the VA is doing a much better job of controlling health care costs than the private sector. After adjusting for a changing case mix as younger veterans return from Iraq and Afghanistan, the CBO calculated that the VA's average health care cost per enrollee grew by roughly 1.7% from 1999 to 2005, an annual growth rate of 0.3%. During the same time period, Medicare's per capita costs grew by 29.4 %, an annual growth rate of 4.4 %. In the private insurance market, premiums for family coverage jumped by more than 70% (PDF), according to the Kaiser Family Foundation.

Every health system has its faults, and the VA is no exception. In recent years, it has been challenged by severe budgetary constraints and a surge in demand, as large numbers of injured and ill veterans return from the wars in Iraq and Afghanistan. Its Vietnam-era veterans are aging rapidly and the agency must contend with growing case complexity. When a system as big as the VA falls short, anecdotes about shortcomings get more play than reams of data.

But the VA also has formidable strengths. Early on, the VA embraced many of the attributes that characterize our nation's top-performing private healthcare systems: It was an early adopter of an interoperable electronic health record; it has strong affiliations with the nation's top medical schools; it regularly measures and applies quality data, and it has a salaried medical staff that is well-aligned with the agency's mission.

RAND is committed to data- and fact-driven analysis. As the nation struggles to confront the twin challenges of rising healthcare costs and uncertain quality, we should be willing to embrace innovative practices wherever they exist, whether they are developed in private, for-profit health care systems or so-called "socialized" ones, like Britain's NHS or America's VA.