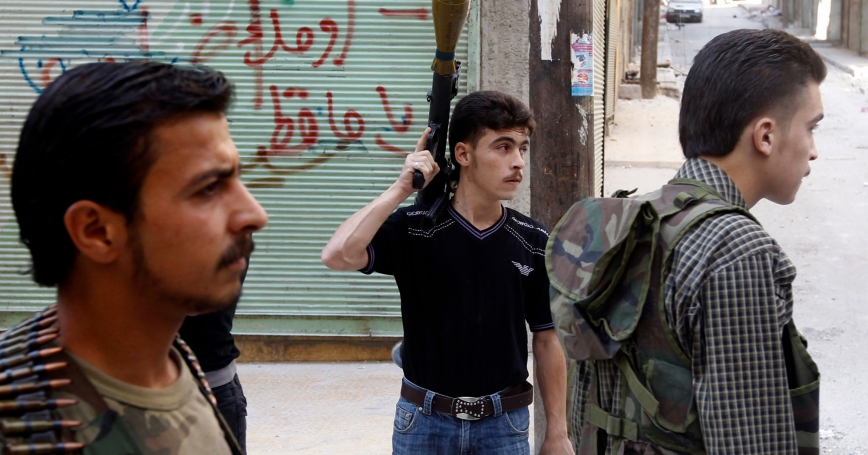 A Free Syrian Army fighter holds an RPG launcher during clashes with the Syrian Army in central Aleppo, August 5, 2012

The United States can support the insurgents without providing arms.

As diplomatic options for ending the conflict in Syria have failed, calls to arm and provide air support for Syrian rebels are becoming more widespread — with several senators, a former Bush administration senior official and a former Obama State Department official leading the charge.

Although we share their commitment to a humanitarian end to the brutality of the Assad regime, arguments to support the rebels militarily are based on three common assumptions that do not withstand scrutiny:

Military support will make the war shorter and enable the rebels to win.

Analysis by close observers, such as the widely respected and nonpartisan International Crisis Group, suggests that a protracted civil war based on sectarian divides would probably continue even after President Bashar Assad falls. It's not clear how outside air power or arms for the rebels would quell such sectarian conflict (and no one is talking about sending ground troops).

As a result, a clear-cut military victory that ends the bloodshed seems increasingly unlikely, with or without U.S. support. To the contrary, outside military involvement may only increase the incentives for Russia and Iran to continue to support the regime now and its remnants after Assad goes.

Increased and direct military assistance to the rebels will expand U.S. influence after Assad falls.

Pro-interventionists often argue that staying out of the Syrian conflict will lead the opposition to resent and resist U.S. influence after Assad falls, throwing the opposition into the sway of less liberal influences. But, just as in other conflicts in which the United States has lent support, military assistance may not buy us long-term political influence.

In any event, while rebel groups may resent being turned down by the Americans now, it is hard to imagine they would turn their backs on U.S. support that is likely to stream in quickly after Assad is gone. Moreover, what alternative partner would be as attractive to a new Syrian government as the United States? The Russians and Iranians, with their unwavering support for Assad, have all but written off their prospects for ties with future leaders.

A more likely outcome is that a U.S. military role would bring extremists more, not less, support. Al Qaeda would be happy to exploit U.S. support for more liberal secular opposition groups as a way to taint those factions and erode their influence among the Syrian population. And how can we be sure that American weapons don't make their way into the hands of extremist elements within the opposition?

It may very well be that, in the heat of struggle, most Syrian opposition fighters and an array of civil society activists want U.S. military support. And we are not ruling out logistic or even military support of a humanitarian nature if the situation drastically deteriorates. But the demand for U.S. arms now doesn't make it the right option, for the activists or for the United States. The risks are high, something even the supporters of arming the rebels acknowledge, without sufficient evidence that such efforts would prove effective.

It's also important to remember that military might isn't the only way to support the activists and fighters. The Obama administration, far from sitting on its hands, as Sen. John McCain and his colleagues allege, has led international efforts to isolate and sanction those most responsible for the regime's violence, and those efforts — along with diplomacy to bring Russia and China along — should be strengthened.

The State Department and others are already working with Syrians to prepare for a post-Assad world. Even there, however, U.S. policy should have a light touch, focused on encouraging Syrians — especially those within the country — to begin building a pluralistic polity, embracing and empowering its many ethnic groups while being governed by the rule of law. Sunni Muslim leaders especially should be encouraged to embrace those minorities most fearful of Assad's ouster, especially the Alawites.

American influence flows not only from our weapons but from the concrete assistance we can provide after the uprising, such as security sector reform, humanitarian and economic assistance, and technical and legal training. Being a partisan to the conflict through military support — causing us to be seen, for instance, as an opponent of key "losing" ethnic groups — would make such assistance less effective.

As they move beyond the shadow of four decades of Assads, Syrians will have to decide how to go forward, such as what institutions to build or rebuild and how to do it, what principles should guide a new government, how to replace authoritarianism and corruption with the rule of law, and whether to hold accountable those responsible for the violence of recent months and the decades of abusive rule by the regime. We should be there to support those efforts, but it would be infinitely more complicated if we enter with the force of arms.

Dalia Dassa Kaye is a senior political scientist at Rand Corp. and a 2011-12 visiting fellow at the UCLA Burkle Center for International Relations. David Kaye, a State Department lawyer from 1995 to 2005, is a professor at the UC Irvine School of Law.

This commentary originally appeared in Los Angeles Times on August 8, 2012. Commentary gives RAND researchers a platform to convey insights based on their professional expertise and often on their peer-reviewed research and analysis.