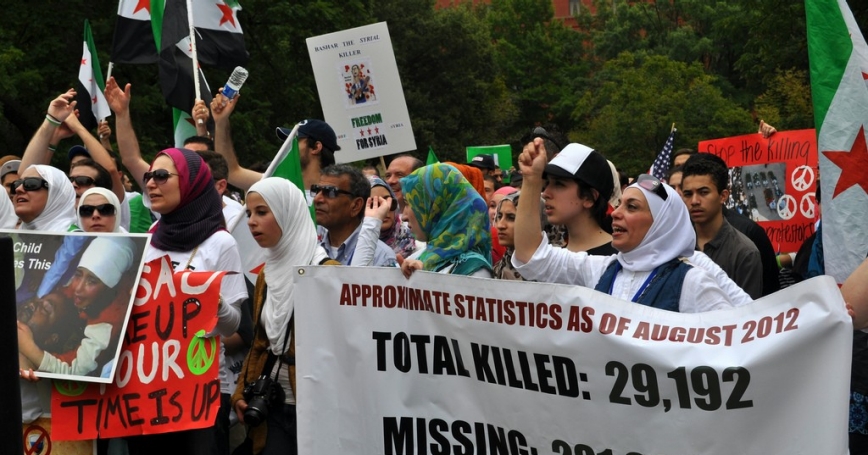 photo by United to End Genocide/Flickr.com

Considerable ink has been spilled in recent weeks over the growing threat Al Qaeda fighters pose to the regime of Bashar al-Assad in Syria. One of the many arguments being put forward for why the United States should not supply more direct assistance to Syrian rebels is that a rebel victory could result in Al Qaeda or its sympathizers coming to power in a post-Assad Syria. Given how Afghanistan's US-supported mujahideen later morphed into Al Qaeda and the Taliban, the Obama administration's caution is understandable.

Yet ironically, this view transforms Al Qaeda into one of Mr. Assad's most effective assets. For the Syrian regime, the jihadist challenge in Syria is small yet growing, but the prospect of the US providing rebels with surface-to-air capabilities, a no-fly zone, or more direct assistance presents an existential threat. If Al Qaeda's presence is deterring US policymakers from getting further involved in the Syrian crisis, then it may be a presence that the Assad regime finds well worth preserving.

The other problem with focusing too much on the prospect of an Al Qaeda ascension is that the costs of inaction in Syria are woefully underrepresented in the policy debate. Even if the rebels ultimately prevail, if the US continues to sit on the sidelines as the human toll rises, it could face a decidedly anti-American government in Damascus whether jihadists come to power or not.

For the Assad regime, Al Qaeda's presence in Syria not only serves to fend off external threats (like US intervention), it reduces one of Assad's many internal threats: the defection of Syrian minorities to the rebels' side. Jihadists consider the minority Alawites (who dominate the Assad regime) and Druze (whose support is being sought both by Assad and the opposition) to be heretics, subject to the punishment of death. The historic animosity between these groups and Syrian Sunnis is probably enough on its own to keep them loyal to Assad. But a jihadist death-sentence goes a long way toward squelching any remaining doubts.

After witnessing how Christians fared against Al Qaeda in Iraq, Syria's Christian community is not giving the rebels the benefit of the doubt, and instead is operating as though a rebel victory means that Muslim extremists—or at minimum, a decidedly anti-minority government—will come to power. Most remain with Assad for now, but the more that the rebellion takes on an Islamist hue, the less likely those Syrian minorities will turn on Assad.

Of course, the prospect of Al Qaeda or other extremists coming to power, or having influence on a post-Assad regime would also be a nightmare for US regional interests. So that scenario should be factored into policy calculations, even if it is unlikely at this time. Yet the amount of attention that this scenario is receiving, especially in US intelligence circles, suggests that the magnitude of its effect on policy formation may be disproportionate to its likelihood.

Focusing on Al Qaeda's potential for exploiting the Syrian conflict distracts from the rapidly mounting costs of US inaction. As Washington dithers, resentment of America is growing among the Syrian population and the broader Middle East. These are not potential costs; they are mounting costs.

Anti-US sentiment weakens America's regional allies and empowers its enemies—like Al Qaeda. US influence on the Arab-Israeli issue, nascent Arab political reform, and even the future of Iraq is diminishing. Without clearer US engagement, the conflict in Syria will likely drag on. The longer it does, the more time Assad has to visit brutality upon the Syrian population—and the more likely would-be US supporters will turn in frustration to other sources of protection.

The possibility of US arms and training for the Syrian opposition somehow empowering Al Qaeda is frightening, but so too is the establishment of any post-Assad regime that is hostile to US interests. If policymakers let fears of Al Qaeda keep them from providing more extensive support for Syrian rebels, they could help create the very conditions they were assiduously trying to avoid.

This commentary originally appeared in Christian Science Monitor on September 19, 2012. Commentary gives RAND researchers a platform to convey insights based on their professional expertise and often on their peer-reviewed research and analysis.