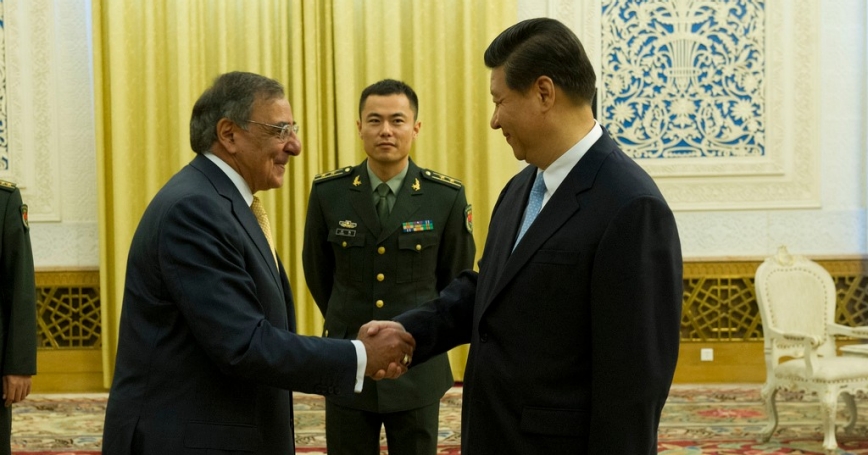 photo by Erin A. Kirk-Cuomo/DoD

Secretary of Defense Leon Panetta, in Beijing this week immediately following meetings in Tokyo, was tasked with an extremely urgent and sensitive mission: convince China's leaders to bring to a close their campaign to ratchet up tensions with Japan over disputed islands in the East Sea.

Panetta has likely reminded Chinese leaders, in private if not public, that Washington will regard any use of force against Japan over the Senkakus as invoking the U.S.-Japan Treaty of Mutual Cooperation and Security—Article V of which clarifies that the U.S. is obliged, within constitutional limits, to respond to any "armed attack… in the territories under the administration of Japan," a phrasing which includes the Senkakus.

Chinese leaders' willingness to stir up domestic lawlessness and direct it against the lives and property of Japanese living in China is reckless; already numerous instances of assaults on Japanese individuals in China have occurred, including a prominent incident where hooligans assaulted Tokyo's ambassador to China. Attacks on factories and stores making and selling Japanese-branded goods, as well as the smashing and burning of Japanese cars owned by private Chinese citizens, have also occurred. Panetta's visit should make clear that China's lawless domestic behavior will not be allowed to be repeated abroad, because if it is, it could lead to armed conflict between China and the U.S.-Japan alliance.

Indeed, although Chinese Foreign Ministry spokesman Hong Lei has sought to disavow any responsibility for these attacks on Japanese-linked property and individuals, the reality is that the Chinese government has deliberately created this situation by playing up conflict and inciting a sense of wounded nationalism and hatred among younger Chinese through its educational system and official propaganda. The results have included mobs carrying racist and genocidal signs ("Exterminate Japanese Wild Dogs Using Nuclear Weapons," read one poster in Shenzhen last weekend); attacking foreign embassies, businesses and innocent civilians; and calling for war. The unrest suits China's political leaders, who seek to put pressure on Tokyo to negotiate over the Senkakus.

Countries such as India, South Korea, the Philippines, and Vietnam that have their own territorial disputes with China will be watching closely to see how the PRC attempts to coerce Japan diplomatically, economically and through paramilitary and perhaps even conventional military force. They will also take note of how the U.S. responds, and may have to rethink their own strategies if China pushes Japan around and the U.S. stands idly by.

A country's normative soft power is measured by how it comports itself in challenging times and the example it sets for others—a fact as true for the U.S. as for China. While China is rapidly burning through its power to attract others through its handling of its disputes with Japan (and earlier with the Philippines), the U.S. would also risk losing credibility if it sought to back away from its ally in a moment of need. The U.S. needs to reassure other allies and friends that Washington is a dependable security partner.

In public, Panetta has firmly reiterated that both sides need to find ways to tamp down emotions immediately, avoid any further provocative actions (including sending commercial fishing fleets towards the islands), and engage in a diplomatic process to restore calm. In private, he most likely made clear that the U.S. believes Japan is doing its part already, as the Japanese decision to nationalize the islands was intended to tamp down, not stir up, emotions by preventing the sale of the islands to right-wing Japanese nationalists.

The Secretary's visit should have helped make clear to China that that there is no outcome to the Senkakus dispute in which it gets what it wants through the use of military or paramilitary force, and that the only resolution will entail a return to normal diplomatic exchanges and dialogue.

Scott Harold is an associate political scientist at the nonprofit, nonpartisan RAND Corporation.